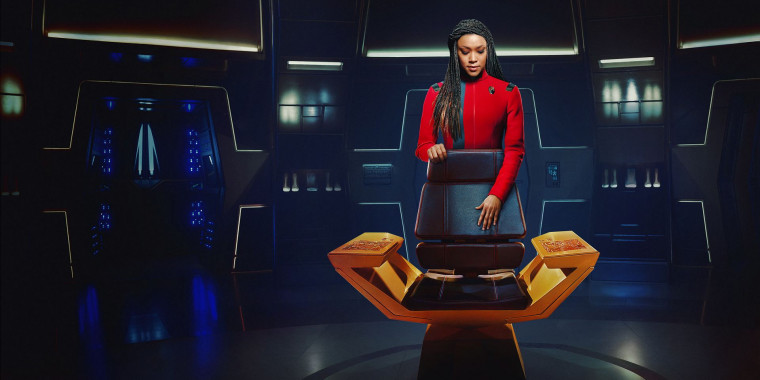 Star Trek: Discovery Renewed For Seasons 4 & 5 By CBS All Access!

Star Trek: Discovery stars Sonequa Martin-Green and Doug Jones, along with Executive Producers and Co-Showrunners Alex Kurtzman and Michelle Paradise, are excited to reveal the cast and crew will be returning to set on November 2 to start production on the series’ next season. Stream all-new episodes of Star Trek: Discovery on Thursdays, exclusively in the U.S. on CBS All Access.

STAR TREK: DISCOVERY follows the voyages of Starfleet on their missions to discover new worlds and new life forms, and one Starfleet officer who must learn that to truly understand all things alien, you must first understand yourself. Seasons one and two are now available to stream on CBS All Access for subscribers in the U.S., and is distributed concurrently by CBS Studios International on Netflix in 188 countries and in Canada on Bell Media's Space channel and OTT service Crave.

After following Commander Burnham into the wormhole in the second season finale, season three of STAR TREK: DISCOVERY finds the U.S.S. Discovery crew landing into an unknown future far from the home they once knew. Now living in a time filled with uncertainty, the U.S.S. Discovery crew, along with the help of some new friends, must work together to restore hope to the Federation.

Seasons one and two of STAR TREK: DISCOVERY are available to stream now on CBS All Access, and the series is distributed concurrently by ViacomCBS Global Distribution Group on Netflix in 188 countries and in Canada on Bell Media's CTV Sci-Fi Channel and OTT service Crave. The series is produced by CBS Television Studios in association with Secret Hideout and Roddenberry Entertainment.

Season Four of "Star Trek: Discovery" Will Premiere Thursday, Nov. 18 on Paramount+ in the U.S.

Sept. 8, 2021 - Paramount+, the streaming service from ViacomCBS, today revealed that season four of its hit original series STAR TREK: DISCOVERY will premiere on Thursday, Nov. 18, exclusively for Paramount+ subscribers in the U.S. The announcement was made during the STAR TREK: DISCOVERY panel that took place at today's global live-streamed Star Trek Day celebration. The date was revealed following a sneak peek clip from the upcoming fourth season, introduced virtually by series star Sonequa Martin-Green.

Season four of STAR TREK: DISCOVERY finds Captain Burnham and the crew of the U.S.S. Discovery facing a threat unlike any they've ever encountered. With Federation and non-Federation worlds alike feeling the impact, they must confront the unknown and work together to ensure a hopeful future for all.

STAR TREK: DISCOVERY streams exclusively on Paramount+ in the U.S., and the series is distributed concurrently by ViacomCBS Global Distribution Group on Netflix in 190 countries and in Canada on Bell Media's CTV Sci-Fi Channel and streams on Crave. The series is produced by CBS Studios in association with Secret Hideout and Roddenberry Entertainment.

How do you feel about this latest Star Trek: Discovery news? Share your thoughts with us in the comments below and don’t forget to stay tuned for all the renew/cancel 2021-2022 and beyond news!