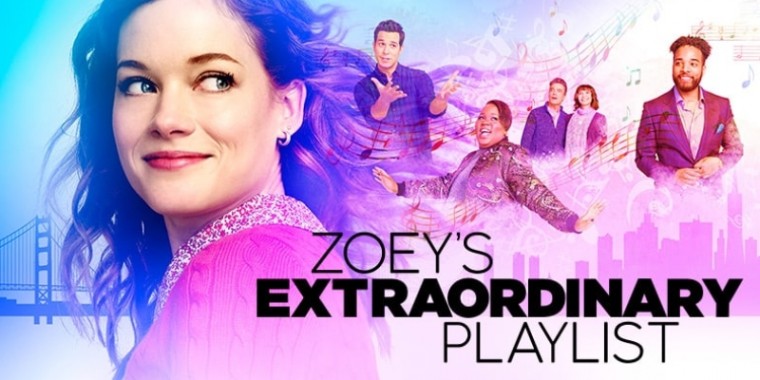 Zoey’s Extraordinary Playlist lives on. The buzzy series, which was canceled by NBC after two seasons, would get a new chapter with a holiday movie for streamer Roku, I have learned. The series’ main cast, led by Jane Levy, is slated to return, I hear.

The deal, which is still being finalized, is for a movie, but in success, it could lead to another season of the show, sources said.

'Zoey's Extraordinary Playlist' is the kind of show that doesn't just entertain people, it speaks to them," said Colin Davis, Roku's Head of Original Scripted Programming. "The show has a healing power about it, which is brought to life by the incredibly talented cast through music and dance. That connection with the audience is what makes bringing a holiday-themed film like Zoey to life with the original cast so special. We are absolutely thrilled to call 'Zoey's Extraordinary Christmas' our first Roku Original film and make it available to both longtime fans and new ones on The Roku Channel this holiday."

The film picks up where season two left off, continuing Zoey's journey as she navigates work, family, love, and everything in between. Golden Globe(R) nominated Jane Levy, Skylar Astin, Alex Newell, John Clarence Stewart, Andrew Leeds, Alice Lee, Michael Thomas Grant, Kapil Talwalkar, David St. Louis, Mary Steenburgen, Peter Gallagher, and Bernadette Peters (nominated for an Emmy(R) for her performance in the series), will all reprise their roles, bringing the same love and passion to the full-length feature film that loyal fans have come to know from the television show. "Zoey's Extraordinary Christmas" is produced by Lionsgate in association with the Tannenbaum Company, Feigco Entertainment and Universal Music Group's Polygram Entertainment and Zihuatenejo Productions.

Creator Austin Winsberg said, "I am so extremely grateful to The Roku Channel for helping us get Zoey to sing again. I can't think of a more appropriate time to hear someone's heart song than the holidays. And Zoey's Extraordinary Christmas will be an opportunity to provide the fans and new viewers alike a chance to all tap their toes and get in the holiday mood. This show has always been about empathy, compassion and the triumph of the human spirit. The Roku Channel has sure lifted mine and I hope that our film can have the same effect on viewers everywhere... "

"Zoey's Extraordinary Playlist" television series debuted on NBC in 2020 quickly becoming one of television's most buzzed-worthy shows and a ratings hit. The series was a critic's favorite earning multiple award accolades including an Emmy(R) award for Outstanding Choreography for Scripted Programming,5 Emmy(R) nominations and a Golden Globe(R) nomination for its star Jane Levy. After its run on NBC, the series and talent received immense support on socials through #savezoeysplaylist to continue the story, underscoring the show's loyal fan base.

"The fans were passionate and unwavering in their support, and their perseverance paid off. There's no better encore than a Zoey's Extraordinary Playlist movie on Roku available to stream for the holidays," said Lionsgate EVP, Television & Head of Development Scott Herbst and Lionsgate EVP, Television & Head of Current Programming Lee Hollin. "We're proud to partner with The Roku Channel in bringing compelling, original programming to their fast-growing and engaged audiences. 'Zoey's Extraordinary Christmas' is a continuation of our beloved story and Roku is the perfect home for it."

In this joyous and celebratory drama, Zoey Clarke is a whip-smart computer coder forging her way in San Francisco. After an unusual event she starts to hear the innermost wants and desires of the people around her through songs. At ﬁrst, she questions her own sanity but soon realizes this unwanted curse may just be an incredibly wonderful gift.

If there’s a song in your heart, it will get in her head. Jane Levy stars in this high-concept drama as Zoey Clarke, a whip-smart computer coder forging her way in San Francisco. After an unusual event, Zoey, who always preferred podcasts over pop songs, suddenly starts to hear the innermost wants, thoughts and desires of the people around her – her family, co-workers and complete strangers – through popular songs. At first, she questions her own sanity, but after getting some guidance from her musically adept neighbor, Mo, and making a breakthrough with her ailing father, Zoey soon realizes this unwanted curse may just be an incredibly wonderful gift as she connects with the world like never before.

“Zoey’s Extraordinary Playlist” is produced by Lionsgate and Universal Television in association with the Tannenbaum Company, Feigco Entertainment and Universal Music Group’s Polygram.

“Zoey’s Extraordinary Playlist” is produced by Lionsgate in association with the Tannenbaum Company, FeigCo Entertainment and Universal Music Group.

How do you feel about this latest Zoey’s Extraordinary Playlist news? Share your thoughts with us in the comments below and don’t forget to stay tuned for all the renew/cancel 2021-2022 and beyond news!