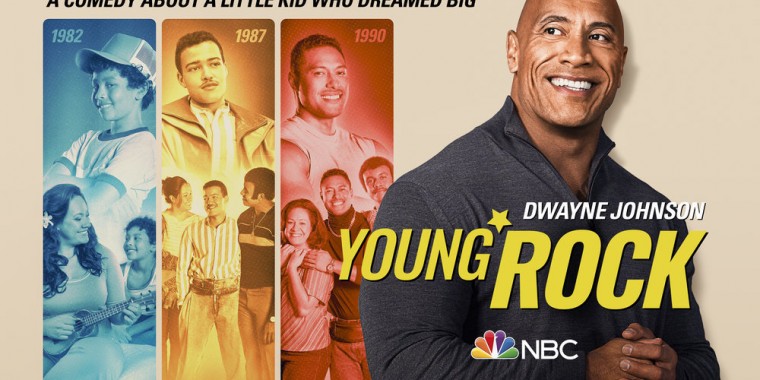 · NBC has renewed its first-year comedies “Young Rock” and “Kenan.”

· “It has been a true joy to watch Dwayne Johnson & Kenan Thompson on NBC every week and see families connect with their relatable, entertaining and heartwarming stories,” said Lisa Katz, President, Scripted Programming, NBCUniversal Television and Streaming. “We’re thrilled to renew both of these shows for another season and can’t wait to see more from Dwayne, Kenan and the incredibly talented casts and producing teams behind each of them.”

· “Young Rock” focuses on different chapters of Dwayne Johnson’s life. From growing up in a strong and resilient family, to being surrounded by the wild characters of his professional wrestling family, to playing football at the University of Miami, the show explores the crazy rollercoaster that has shaped Dwayne into the man he is today and the larger-than-life characters he’s met along the way.

· The “Kenan” premiere ranks as NBC’s #4 digital comedy launch on record and has been seen by 7.4 million viewers.

· This single-camera comedy follows a widowed dad, Kenan (Kenan Thompson), who’s juggling a high-profile job as the host of an Atlanta morning show and raising his two girls. As Kenan tries to move on, his father-in-law Rick (Don Johnson), brother Gary (Chris Redd) and co-workers all have strong opinions on the best way to live his life.

· “Kenan” is produced by Universal Television, a division of Universal Studio Group, in association with Broadway Video.

Logline: Christmas Eve, 1982: An unexpected guest shows Dewey that this is the first in a long line of terrible Christmases. In 1987, Rocky and Dwayne take jobs as a mall Santa and elf. In 1993, Dwayne reluctantly spends a disastrous Christmas with Coach O.

NBC has renewed its first-year comedies "Young Rock" and "Kenan."

From Nahnatchka Khan and Dwayne Johnson comes "Young Rock," a single-cam comedy inspired by Johnson himself.

The pilot was co-written by Khan and Chiang. Johnson will appear in each episode as the focus and inspiration of the series will be about his formative years.

Johnson and Garcia's Seven Bucks Productions is a global entertainment force with film revenues exceeding $10 billion worldwide. Johnson currently stars in "Jumanji: The Next Level" which has grossed over $600M worldwide and will next star in Disney's "Jungle Cruise." Johnson and Garcia will also return to executive produce the second season of NBC's "The Titan Games," Johnson also serves as host.

Writer/director/showrunner Khan's Fierce Baby Productions is a film and TV production company focused on amplifying new voices and perspectives in both comedy and drama. Khan is the creator and executive producer of the groundbreaking television series "Fresh Off the Boat," currently airing its sixth and final season, and previously "Don't Trust the B---- In Apartment 23," which ran for two seasons on ABC.

How do you feel about this latest Young Rock news? Share your thoughts with us in the comments below and don’t forget to stay tuned for all the renew/cancel 2021-2022 and beyond news!