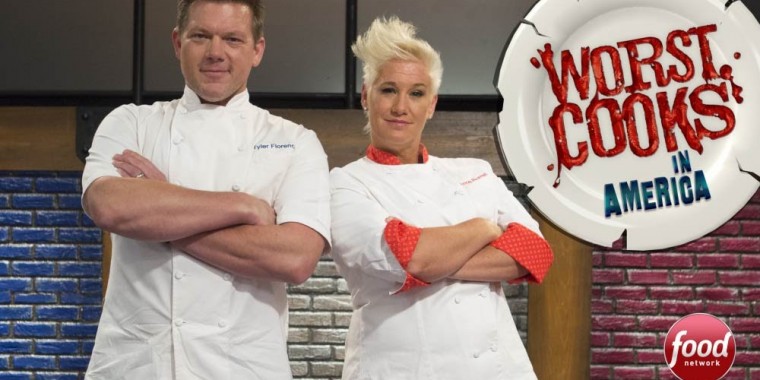 Food Network kicks off the New Year with a brand-new season of fan-favorite series Worst Cooks in America and this time, Chef Carla Hall is facing off against Chef Anne Burrell to see who can transform their team of kitchen disasters into culinary masters. They have their work cut out for them as two teams of terrible cooks, one lead by Carla and the other by Anne, battle their way through a rigorous kitchen boot camp. From a farm-themed showdown to a “Meal or No Meal” game show and lumberjack pancake stack race, the challenges are tougher and more outrageous than ever. In the end, only the recruit who makes the most impressive culinary transformation wins the $25,000 grand prize and bragging rights for their team mentor. The season premieres with a 90-minute episode on Sunday, January 3rd at 9pm (all times ET/PT) on Food Network. Immediately following at 10:30pm, companion series Worst Cooks in America: Dirty Dishes begins its first-ever run. Each week, memorable boot camp alumni, celebrity recruits including Carson Kressley and Sonja Morgan, and comedians watch along and dish the dirt on the funniest episodes of Worst Cooks in America.

“Carla is the perfect addition as a Worst Cooks mentor – watching her and Anne tackle the almost insurmountable task of whipping these kitchen disasters into shape makes for a very entertaining season,” said Courtney White, President, Food Network. “On Dirty Dishes, the laughs are constant while watching the most outrageous show moments alongside celebrities, comedians and the recruits who lived them.”

In the premiere episode, Anne and Carla welcome fourteen horrible cooks to boot camp and for the first challenge, they have the recruits make their favorite horrendously homemade dishes to show off their cooking chops, or lack thereof. Anne and Carla then pick teams and for the main challenge, the recruits are tasked with replicating Asian takeout dishes. The recruits on each team with the worst dishes are sent home and the rest move on to cook another day. Upcoming episodes include a farm-to-table challenge, all-seafood skill drill and a fast-paced game all about breakfast. In the finale on Sunday, February 28th at 9pm, the two most improved recruits put all their newly learned culinary skills to the test to impress a panel of food experts. Ultimately judges Adrienne Cheatham, JJ Johnson and George Mendes taste the dishes in a blind taste test and determine the winner of the $25,000 grand prize.