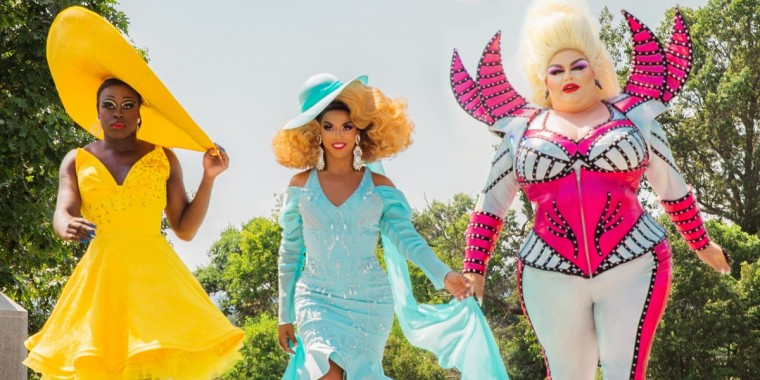 “We’re Here resonates in ways we had hoped for but couldn’t really have anticipated,” said Rosenstein. “The stories of our small-town drag daughters created an incredibly positive communal experience. We can’t wait for Bob, Shangela and Eureka to continue their journey helping others find their voice.”

Season one towns included: Gettysburg, PA, Twin Falls, ID, Branson, MO, Farmington, NM, and Ruston, LA. The season finale aired last night, with a dive into the queens’ own stories of struggle and perseverance, ending with a celebration of love and taking pride in oneself.

The Emmy(R)-nominated unscripted series WE'RE HERE returns for its eight-episode, second season MONDAY, OCTOBER 11 (9:00-10:00 PM ET/PT). Episodes will debut weekly on HBO and will be available to stream on HBO Max.

Debuting on National Coming Out Day, this season follows renowned drag queens Bob the Drag Queen, Eureka O'Hara and Shangela as they continue their journey spreading love and connection across small-town America, through the art of drag. As the queens recruit local residents from Spartanburg, SC, Temecula, CA, Del Rio, TX, Selma, AL, Evansville, IN, Watertown, SD, Kona, HI, and Grand Junction, CO to participate in one-night-only drag shows, they inspire their "drag daughters" to express their genuine selves in front of their families, friends and communities.

Described by Salon as "a show about loving - truly loving - your neighbor," the first season was lauded as "genuinely moving" by the New York Times, and "pitch-perfect" by Entertainment Weekly.

WE'RE HERE recruits local residents across small-town America to participate in a one-night-only drag show. In each episode, renowned drag queens Bob the Drag Queen, Eureka O'Hara and Shangela Laquifa Wadley visit a different small town to inspire and teach their own "drag daughters" to step outside their comfort zone for a night of no-holds-barred, full-on drag.

WE'RE HERE will be available on HBO NOW, HBO GO, HBO on Demand and affiliate portals.

Bob the Drag Queen, Eureka O'Hara, and Shangela Laquifa Wadley arrive in Gettysburg, Pennsylvania to put on a one-night-only drag show featuring locals in need of a little support and empowerment, including: Hunter, a young, gay make-up artist yearning for a deeper connection with his father; Darryl, a local college admissions officer hoping to tell a story of race in America while being an effective ally to the LGBTQ community; and Erica, a conservative Christian mother eager to reconnect with her estranged daughter Hailey, who recently came out as bisexual.

Bob, Eureka, and Shangela head west to Twin Falls, Idaho, a conservative, predominately Mormon community in Magic Valley. There, they meet Michael, Owen, and Amelia, a group of local drag artists who need help forming a community. In order to do just that, the queens work with: Clifton, a young, straight musician trying to make amends for his past by testing his definition of masculinity; and Brandon, a trans man, and his wife, Mikayla - high school sweethearts from religious families - who are looking for the wedding experience they didn't have the first time around.

In Branson, Missouri, a wholesome showbiz town smack in the middle of the Bible Belt, Bob, Eureka, and Shangela help three locals struggling to be their true selves in a community that prides itself on its traditional, religious values. Among them are Tanner, a young actor questioning whether it's possible for him to be both Christian and gay; Charles, a classically-trained dancer who wants to show that he's not just out, but proud; and Chris, a father grappling with mental health issues who's determined to embrace his emotions for the sake of his daughter.

How do you feel about this latest We’re Here news? Share your thoughts with us in the comments below and don’t forget to stay tuned for all the renew/cancel 2021-2022 and beyond news!