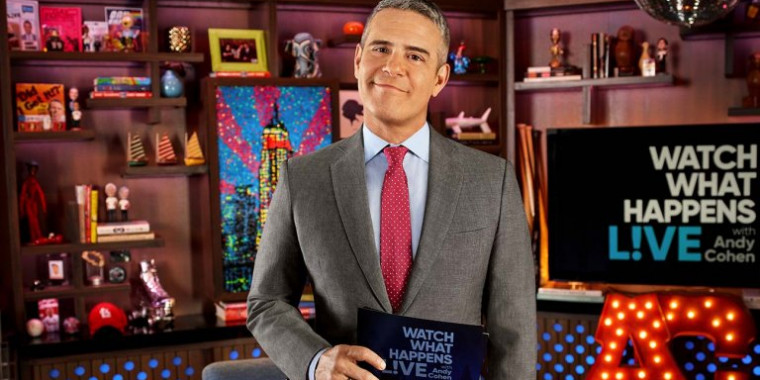 BRAVO RENEWS EMMY(TM) AWARD-NOMINATED “WATCH WHAT HAPPENS LIVE WITH ANDY COHEN” FOR SEASONS 20 AND 21, KEEPING THE LONG-RUNNING SERIES SAFE THROUGH 2023

About Watch What Happens Live with Andy Cohen TV Show

Bravo has extended Emmy(TM) Award-nominated "Watch What Happens Live with Andy Cohen" through 2023. Cohen is host and executive producer of "Watch What Happens Live with Andy Cohen," and continues to delightfully engage both celebrities and Bravolebrities with candid conversation and laughter. The critically acclaimed series consistently makes headlines with bold interviews viewers don't see anywhere else. Because of this, the Bravo Clubhouse has become a nightly destination for some of the biggest names in entertainment, politics and pop culture.
"My WWHL team rose to every challenge of the pandemic, and getting to do WWHL for two more years is the ultimate reward. We're still having a ball making our show - whether our guests are virtual or in studio!" said host and executive producer Andy Cohen.

"Watch What Happens Live with Andy Cohen" has the highest reach of any late-night cable entertainment talk show among all key demos, with almost 17 million total viewers watching in 2021. The series also boasts year-over-year ratings growth among both A18-49 and A25-54, making it the highest-rated late-night talk show on ad-supported cable among A18-49 for the first time ever. It is also the most interactive show in late-night television.

Whether Pleading the Fifth, Opening the Vault, or taking shots from the iconic shotski, countless memorable moments have been created during the show's twelve-year tenure. The series offers fans an unprecedented opportunity to interact with their favorite celebrities and Bravolebrities in real time, inviting them to call in to ask questions or weigh in via live polls. Guests last year included Dolly Parton, Dwayne Wade, Mariah Carey, Patti LaBelle, Octavia Spencer, Sarah Paulson, Melissa McCarthy, Billy Crystal, Ziwe Fumudoh, Lenny Kravitz, Michael J Fox, P!NK, Julianne Moore, Mindy Kaling, Henry Golding, Jessica Chastain, Kate Hudson and more. It was recently announced by the Hollywood Chamber of Commerce that Andy would receive his star on the Hollywood Walk of Fame.

In 2018, "Watch What Happens Live with Andy Cohen" received an EMMY(TM) nomination for Outstanding Creative Achievement in Interactive Media Within an Unscripted Program.

How do you feel about this latest Watch What Happens Live with Andy Cohen news? Share your thoughts with us in the comments below and don’t forget to stay tuned for all the renew/cancel 2021-2022 and beyond news!