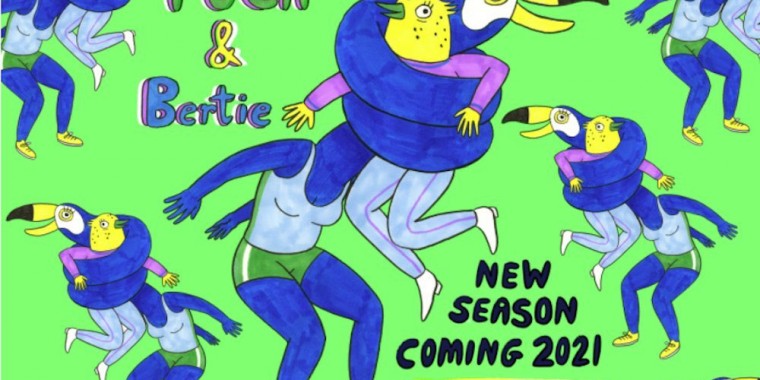 Adult Swim has revived the animated series just a year after it was cancelled by Netflix.

Tuca & Bertie Season 2 is slated to premiere in 2021 on Adult Swim.

Let the party begin. A new season of Tuca and Bertie is coming to Adult Swim in 2021. @aliwong @TiffanyHaddish @lisadraws pic.twitter.com/dmR9yUaTMz

Adult Swim announced today the pick-up of the popular animated series Tuca & Bertie by creator Lisa Hanawalt (BoJack Horseman). The network has greenlit a 10 episode second season for domestic release, with the option for more.

“I’ve been a fan of Adult Swim shows since my teens, so I’m thrilled to bring my beloved fowl to the party and be a new voice for a fresh decade of absurd, irreverent, yet heartwarming adult animation,” said creator Lisa Hanawalt.

Tuca & Bertie is created and executive produced by Hanawalt, with Raphael Bob-Waksberg, Noel Bright, Steven A. Cohen, Haddish, and Wong also serving as executive producers, The series is produced by Michael Eisner’s The Tornante Company and the animation will be done at Shadowmachine.

Warner Bros. is a global leader in the creation, production, distribution, licensing and marketing of all forms of entertainment across all current and emerging media and platforms. A WarnerMedia company, the Studio is home to one of the most successful collections of brands in the world and stands at the forefront of every aspect of the entertainment industry, from feature film, television and home entertainment production and worldwide distribution to DVD and Blu-ray, digital distribution, animation, comic books, videogames, product and brand licensing, and broadcasting.

Everyone's favorite BFFs are set to soar even higher as Adult Swim, the leader in adult animation and #1 destination for young adults, greenlights a third season of the animated comedy Tuca & Bertie. Adult Swim has also secured the international rights for seasons two and three, now making the show available globally via the brand. Filled with relatable scenarios and never-ending chaos, the final two episodes of Tuca & Bertie season two are set to premiere Sunday, August 8 and Sunday, August 15 at 11:30 p.m. ET/PT.

Tuca (Haddish) and Bertie (Wong) are best friends, and they're both full of ghosts! Bertie is busy excavating her inner ghouls with the help of a therapist, while Tuca prefers to stuff hers behind the toilet. She'll deal with them later, right now she's just too busy trying not to be single anymore! Meanwhile, Speckle (Steven Yeun) is building a new house but soon finds he's driven to the brink of insanity...good thing he's just a cartoon.

Tuca & Bertie is created and executive produced by Lisa Hanawalt, with Raphael Bob-Waksberg, Noel Bright, Steven A. Cohen, Haddish, and Wong also serving as executive producers, The series is produced by Michael Eisner's The Tornante Company with the animation being done at Shadowmachine.

Adult Swim (AdultSwim.com), launched in 2001, is WarnerMedia's #1 brand for young adults offering original and acquired animated and live-action series. Airing nightly from 8 p.m. to 6 a.m. (ET/PT) on its linear channel, and also available through HBO Max, Adult Swim is basic cable's #1 network with persons 18-34 and 18-49, and is seen in 94 million U.S. homes, reaching over 40 million viewers via HBO Max.

GKYAC's mission is to be the premiere global provider of kids, family, young adults, and classics content and brands. The group's programming supplies unique and compelling content for HBO MAX, WarnerMedia's direct-to-consumer platform. Uniting these award-winning networks and innovative brands helps maximize opportunities and growth potential, both as standalone businesses and as content generators, to drive and support its franchises, cross-studio initiatives as well as ratings.

Warner Bros. GKYAC's content is currently distributed in 192 countries around the world and the division's networks are in 500 million homes, delivered through more than 65 channels in 31 languages.

How do you feel about this latest Tuca & Bertie news? Share your thoughts with us in the comments below and don’t forget to stay tuned for all the renew/cancel 2021-2022 and beyond news!