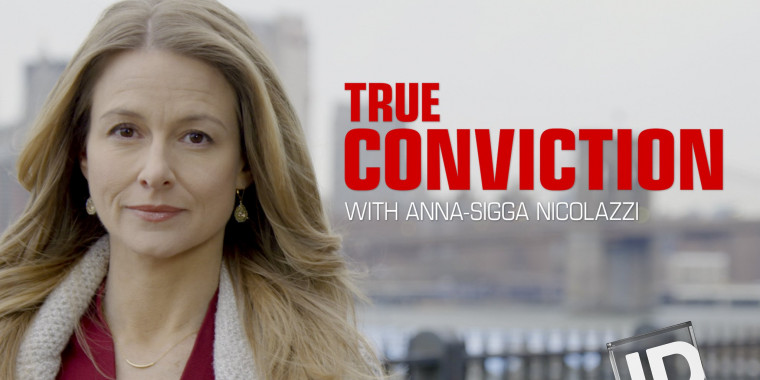 TRUE CONVICTION IS BACK FOR 4TH SEASON ON ID and discovery+

The true crime series, led by Anna-Sigga Nicolazzi, has been renewed for Season 4, which is set to premiere Tuesday, March 8 at 10pm ET/CT.

Sigga Nicolazzi travels across the country to reveal how the nation’s top prosecutors tackled their toughest cases, taking viewers inside the fight for justice for victims and their loved ones.

Prosecuting powerhouse Anna-Sigga Nicolazzi is back for a fourth season of Investigation Discovery's hit series, TRUE CONVICTION. Each episode explores the real-life stories of how homicides are solved on the street but won in the courtroom. With more than two decades of experience in the judicial system, no one knows the delicate dance between arrest and conviction better than Brooklyn homicide prosecutor Nicolazzi. Viewers are invited to join her as she travels across the country to reveal how the nation's top prosecutors tackled their toughest cases. Reliving the crime with the detectives who were on the scene and connecting with those who were left behind, Nicolazzi shows the many paths of justice from crime to verdict.

*SEASON PREMIERE*
Tuesday, 3/8 at 10p
A Generational Curse
In August 2014, 15-year-old Jacob Craggett, a popular high school athlete, is caught in the crossfire and killed, trying to save his brother, in a shooting near his grandmother's home in New Haven, Connecticut. His murder brings back a terrible memory for the Craggetts, who lost another beloved relative to gun violence ten years earlier on the very same block. Now the family must wrestle with a mixture of anger and guilt, as a dogged New Haven Police investigator attempts to track down Jacob's killer.

Tuesday, 3/15 at 10p
Panic on the Parkway
Nassau County, Long Island is flipped upside down when a cop and an innocent motorist are murdered on a major highway. An all-hands-on-deck manhunt is ignited in order to find the perpetrator before he can hurt anyone else: because if someone is willing to kill a police officer in broad daylight--you have to wonder, "what won't they do?"

Tuesday, 3/22 at 10p
The Final Heartbeat
When 21-year-old Michaela MacVilla fails to come home one night from her job at a local convenience store, her family is consumed by fear. When her phone turns up a few days later on the side of the road, their fear turns to panic. Investigators will have to solve a complex mystery, by delving deep into the world of digital forensics. When police finally close in on a suspect, they find themselves with more questions than answers in this high-tech who-done-it.

Tuesday, 3/29 at 10p
The Loss of Innocence
When 12-year-old Naomi Jones goes missing, her mother sounds the alarm, triggering a massive search effort. But when they discover her body a few miles from her home, a team of investigators sets out to find the heartless killer who took her life.

Tuesday, 4/5 at 10p
Life is a Battlefield
In December of 2015, darkness falls on San Antonio, Texas when the life of Army Veteran Jesse Richards is tragically taken from him in a senseless murder. Investigators in the San Antonio Police Department grow frustrated with leads that go nowhere. Just when the case seems to have gone cold, a new life is breathed into the investigation with an unexpected phone call.

How do you feel about this latest True Conviction news? Share your thoughts with us in the comments below and don’t forget to stay tuned for all the renew/cancel 2021-2022 and beyond news!