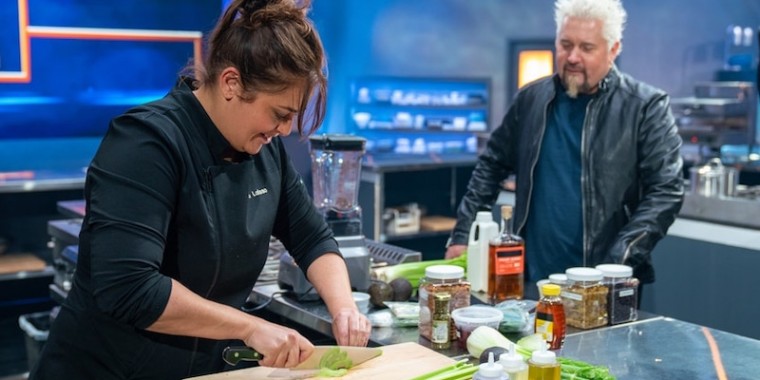 Guy Fieri has signed a new multi-year exclusive deal with Food Network, it was announced today by Courtney White, President, Food Network. The new deal spans three years and includes bringing audiences more of Fieri’s Primetime Emmy-nominated series Diners, Drive-Ins and Dives as well as more episodes of fan-favorites, Guy’s Grocery Games and Guy’s most recent ratings success, Tournament of Champions, along with new projects that Guy is already plotting out for both Food Network as well as for the newly launched discovery+ streamer. With this new deal, Fieri will continue to take an active role in the development and production of his own series through his Knuckle Sandwich production banner and continue to partner with the network and producers from his long-running series. Fieri made his first appearance on the network in 2006 when he won season two of The Next Food Network Star. Additional series that have helped to make Guy a household name include: Guy’s Big Bite, Guy Off The Hook, Guy Fieri’s Road Show, Guy’s Family Road Trip, Guy & Hunter’s European Vacation, Guy’s Ranch Kitchen, and his recent documentary, Restaurant Hustle 2020: All on the Line, as well as numerous holiday specials and guest appearances.

“Guy Fieri infuses his unmatched energy and passion into every show he makes,” said White. “He is truly one-of-a-kind, adored globally for his own love of food and his deep appreciation for the people behind the restaurant scenes. I am beyond thrilled to be able to continue this extraordinary, creative partnership.”

“Food Network is my home and I’m stoked to continue the partnership with the entire Discovery family,” added Fieri. “The world of food is the ultimate unifier so having a global platform to share real-life stories of some of the most deserving chefs, restaurateurs, home cooks, entrepreneurs and anyone who just loves a good meal is an incredible opportunity. I can’t wait for everyone to see what we’re cookin’ up next.”

About Tournament of Champions TV Show

Guy Fieri is back with the toughest bracket-style culinary competition where 16 of the best chefs from the East and West coasts go head-to-head in sudden-death cooking battles on Tournament of Champions II. The action-packed, sports-like tournament kicks off on Sunday, March 7th at 8pm, and each 90-minute episode is filled with unpredictable action, fierce rivalries, and shocking upsets. The chefs' skills will be pushed to the limit in each round, as they face new ingredients, tougher cooking styles and more interesting equipment options on the randomizer machine that determines the parameters for each cook-off, including the protein, produce, equipment, cooking style, and time. The pressure is intense, and emotions are high as the elite chefs enter this blind competition not knowing who their opponents will be, or what cooking challenges they will face, and will have their dishes judged blindly by a panel of distinguished experts. Hunter Fieri follows all the action backstage during the deliberation, capturing the reactions of the chefs as their dishes are judged, getting the raw emotions of elation and frustration as bracket victors move on while others face elimination. The chefs will only go as far as their dishes take them - win and advance or lose and go home. Fans can also stream extended episodes of the tournament and after show on discovery+ featuring even more nail-biting action and behind-the-scenes conversations with Guy and the competitors.

How do you feel about this latest Tournament of Champions news? Share your thoughts with us in the comments below and don’t forget to stay tuned for all the renew/cancel 2021-2022 and beyond news!