Home | Cancellations & Renewals | Top Class: The Life and Times of the Sierra Canyon Trailblazers Renewed For Season 2 By IMDb TV! 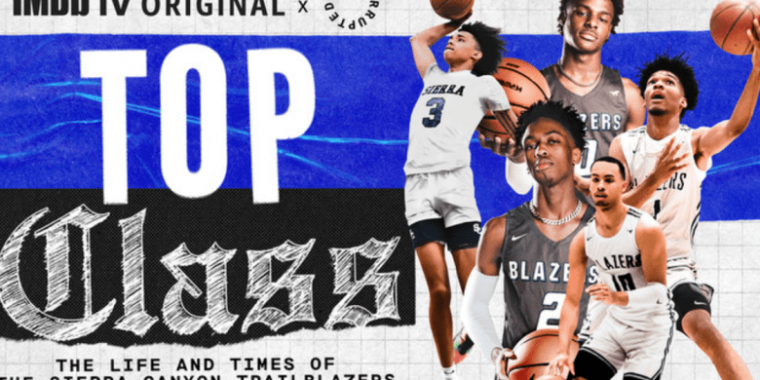 About Top Class: The Life and Times of the Sierra Canyon Trailblazers TV Show

Sierra Canyon, home of the Trailblazers, is a small school in the San Fernando Valley that has become an academic - and athletic - powerhouse. Their basketball program is a perennial contender for California high school state titles, and hopes to bring a national championship to Los Angeles County.

All six episodes of the new season will be available to stream for free beginning Friday, December 17. The entire first season of UNINTERRUPTED's Top Class: The Life and Times of the Sierra Canyon Trailblazers is currently available exclusively on IMDb TV.

IMDb TV, Amazon's premium free streaming service, announced a greenlight order for Season 2 of Top Class: The Life and Times of the Sierra Canyon Trailblazers, the original docuseries from UNINTERRUPTED. Season 2 will pick up where Season 1 ended, with the Trailblazers facing the challenges of the COVID-19 pandemic bringing their historic season to a halt - just before their state championship game.

Executive produced by LeBron James and Maverick Carter, Top Class follows a new mecca of high school athletics nestled just outside of Los Angeles. Season 1, which is streaming exclusively on IMDb TV, followed the back-to-back state champion Sierra Canyon Trailblazers as they exploded onto basketball's national stage with one of the highest profile classes in history, including some of the nation's highest-ranking players: BJ Boston, Amari Bailey, Bronny James, Shy Odom, Zaire Wade, and Ziaire Williams. Led by head coach Andre Chevalier, the team shows viewers firsthand how the most Instagrammed high school basketball team in the U.S. navigates everything from daily life to playing in sold-out arenas.

Season 2 of Top Class will continue to provide exclusive access to the team as they balance the pressures of competing on a global stage. For this new season, viewers will see how these world-class student athletes navigate the pandemic, train at home, and continue finding success at one of the most academically elite high schools in the country.

"Top Class captured the devotion, resilience, passion, and raw emotion experienced by the players and coaches during last year's monumental season," said Lauren Anderson and Ryan Pirozzi, co-heads of content and programming, IMDb TV. "We are thrilled to continue our partnership with UNINTERRUPTED and deliver fans the next chapter of the awe-inspiring Sierra Canyon Trailblazers story."

How do you feel about this latest Top Class: The Life and Times of the Sierra Canyon Trailblazers news? Share your thoughts with us in the comments below and don’t forget to stay tuned for all the renew/cancel 2021-2022 and beyond news!