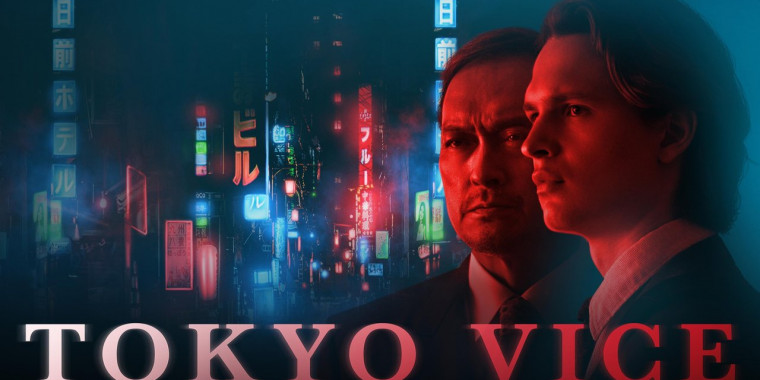 From Endeavor Content and WOWOW, Japan’s leading premium pay TV broadcaster, the first season, which debuted in April, is available to stream on HBO Max. Logline: Loosely inspired by American journalist Jake Adelstein’s non-fiction, first-hand account of the Tokyo Metropolitan Police beat, the crime drama series, filmed on location in Tokyo, captures Adelstein’s (played by Ansel Elgort) daily descent into the neon-soaked underbelly of Tokyo in the late 90s, where nothing and no one is truly what or who they seem.

Sarah Aubrey, Head of Original Content, HBO Max, quote: “We could not be more excited to bring the passionate fans of the show another season to continue this intriguing and suspenseful crime story set in one of the most vibrant and beautiful cities in the world.” Creator J.T. Rogers quote: “Writing and then making the first season of TOKYO VICE with this remarkable group of artists was a matchless experience. So I’m over the moon that we get to keep going.

I can’t wait to get back to work in Tokyo with our brilliant cast and crew. Stay tuned: there are twists and turns in the tale to come!” Executive Producer Alan Poul quote: “The phenomenal viewer response in both the U.S. and Japan has been so gratifying. Making the show, and keeping it authentic, has been a genuine labor of love on the part of our dedicated cast and crew, and we’re thrilled to be able to carry the story forward.” Endeavor Content’s Joe Hipps, EVP, TV quote: “Fans around the world have shown up for this authentic and propulsive story about the underbelly of Tokyo and the Yakuza. JT, Alan, John and the rest of the team will expand on the world they built to deliver a staggering season 2! We look forward to collaborating on the second season with our incredible partners at HBO Max and WOWOW.”

Based on Jake Adelstein’s Non-fiction first-hand account of the Tokyo Metropolitan Police beat starring Ansel Elgort. The drama captures Adelstein’s daily descent into the neon-soaked underbelly of Tokyo, where nothing and no one is truly what or who they seem.

How do you feel about this latest Tokyo Vice news? Share your thoughts with us in the comments below and don’t forget to stay tuned for all the renew/cancel 2021-2022 and beyond news!