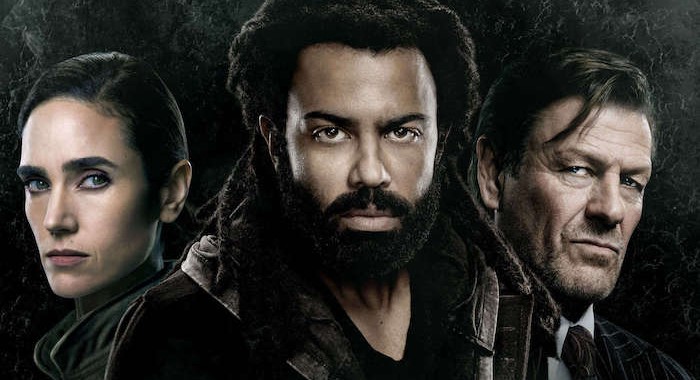 “At a time when we’re all craving shared experiences and connecting with friends, our shows in January and February help fulfill that need. Our diverse lineup leans into the comradery of friendship, fun escapism, and critically acclaimed dramas that bring people together,” said Brett Weitz, General Manager for TNT, TBS and truTV. “Across all three networks, we continue to push the boundaries of storytelling to entertain audiences around the country with compelling characters and outstanding series from the industry’s best creators.”

At the end of season one, the survivors of the revolution are trying to pick up the pieces and maintain a fragile peace amongst the now merged classes with Layton (Daveed Diggs) emerging as the train’s leader. Discovering Mr. Wilford (Sean Bean) is alive and headed their way on a rival train, Melanie (Jennifer Connelly) risks going outside to prevent him from invading Snowpiercer. While she’s out there, it’s revealed that Alexandra (Rowan Blanchard), Melanie’s daughter, who she thought had died, is alive and has become Wilford’s dedicated protegee. In season two, an entirely new power struggle emerges, causing a dangerous rift as people are divided between their loyalty to Layton and to Mr. Wilford, who has a new train, new technology and a game plan that keeps everyone guessing. While Layton battles Wilford for the soul of Snowpiercer, Melanie leads the charge on a shocking new discovery that could change the fate of humanity.

“Snowpiercer” is cable’s #1 new drama series, reaching 32 million viewers to date across TNT’s linear and digital platforms. With 3.3 million total viewers across TNT and TBS, the series premiere in May marked TNT’s largest premiere since “The Alienist” in 2018.

Inspired by the card game Sh*t Happens, “The Misery Index” features teams competing against each other by attempting to rate hilarious and miserable real-life events based on the “misery index,” a ranking system created by a team of therapists. Jameela Jamil stars as the show’s host with The Tenderloins comedy troupe and stars of truTV’s “Impractical Jokers” – Brian “Q” Quinn, James “Murr” Murray, Joe Gatto and Sal Vulcano – starring as recurring panelists. This season will feature special appearances from celebrity guests including Travis Kelce, Joel McHale and All Elite Wrestling’s Jon Moxley.

In cable’s #1 unscripted comedy series, four comedians and lifelong friends known as The Tenderloins compete to embarrass each other with a series of hilarious and outrageous antics. All the while, Sal, Joe, Q, and Murr challenge the limits of their friendship. At the end of every episode, the biggest loser must endure a punishment of epic proportions.

Host Joey Fatone takes the Impractical Jokers and surprise guests through a deep dive of challenges, special play-by-play punishment analysis, and bonus content. You’ll get candid commentary and insider access to the Jokers like never before!

At the end of "Snowpiercer" season two, Layton (Daveed Diggs) and Ruth (Alison Wright), who were banished to Big Alice's compost car, plotted to take back Snowpiercer. With the help of Javier (Roberto Urbina) and Alexandra (Rowan Blanchard), Layton and Ruth made it back to Snowpiercer and rallied with their supporters. Josie (Katie McGuiness) destroyed the Aquarium car, separating Snowpiercer's head from the remaining 1,023 cars. Season three picks up with Layton (Diggs) and his inner circle commanding a small 10 car "pirate train" in search of Melanie (Jennifer Connelly) and a possible warm location to restart civilization; while back on Snowpiercer, Mr. Wilford (Sean Bean) is consolidating power, awaiting Layton's return.

TNT's just celebrated the wrap of season three production on its hit drama series "Snowpiercer" with the announcement of a season four pickup. Produced by Tomorrow Studios, "Snowpiercer" seasons one and two are currently available to binge on the TNT app, with season three set to premiere on TNT early next year.

"Snowpiercer" premiered as the #1 new scripted drama on all of ad-supported cable in 2020. The second season reached 21 million viewers across linear and digital in L+7 viewing, ranking as a Top 5 cable drama.

"'Snowpiercer' has been an incredibly successful series for us that continues to capture the imagination of viewers, grow audience and maintain strong ratings," said Sam Linsky and Adrienne O'Riain, co-heads of scripted original programming for TBS, TNT and truTV. "All of our seasons embark on an emotional, unexpected ride and the well-plotted storylines will continue to evolve and remain relevant to audiences. We're excited to keep the train running into season four."

At the end of "Snowpiercer" season two, Layton (Daveed Diggs) and Ruth (Alison Wright), who were banished to Big Alice's compost car, plotted to take back Snowpiercer. With the help of Javier (Roberto Urbina) and Alexandra (Rowan Blanchard), Layton and Ruth made it back to Snowpiercer and rallied with their supporters. Josie (Katie McGuiness) destroyed the Aquarium car separating Snowpiercer's head from the remaining 1,023 cars. With Layton in command of a 10-car "pirate train," he and his team rushed to Breslauer Research Station to find Melanie (Jennifer Connelly).

Season three picks up with Layton (Diggs) and his inner circle commanding a small pirate train in search of Melanie (Connelly) and a possible warm location to restart civilization, aided by a newfound survivor. Back on Snowpiercer, Mr. Wilford (Sean Bean) is consolidating power, foiled only by secret allies of Layton's hidden on the train, committed to the cause.

Wondering how your other TNT shows are doing? Check out the TNT 2021 TV scorecard page, where you can find the cancel/renew status of all TNT TV shows!

How do you feel about this latest Snowpiercer news? Share your thoughts with us in the comments below and don’t forget to stay tuned for all the renew/cancel 2021-2022 and beyond news!