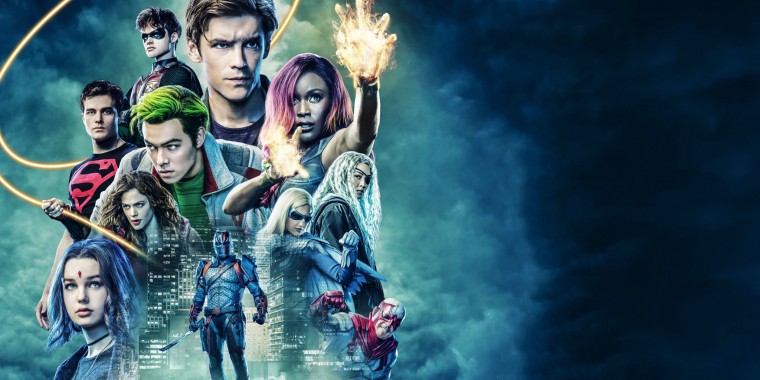 Full program details are below.

· Logline: TITANS follows young heroes from across the DC Universe as they come of age and find where they belong. In season three, circumstances draw our heroes to Gotham City, where they reunite with old friends and face new threats.

· Credits: TITANS is produced by Weed Road Pictures and Berlanti Productions, in association with Warner Bros. Television. Based on the characters from DC, the series was developed by Akiva Goldsman, Geoff Johns & Greg Berlanti, with Goldsman, Johns, Berlanti, showrunner Greg Walker, Sarah Schechter and Richard Hatem serving as executive producers.

TITANS is produced by Weed Road Pictures and Berlanti Productions, in association with Warner Bros. Television. Based on the characters from DC, the series was developed by Akiva Goldsman, Geoff Johns & Greg Berlanti, with Johns, Berlanti, Greg Walker and Sarah Schechter serving as executive producers.

Also, on September 14, DC's TITANS UNITED debuts, a seven-issue limited comic book series, featuring the incredible line-up of super heroes fans know from the Max Original. The series will be available at all participating comic book stores and digital platforms, and is free to subscribers on DC UNIVERSE INFINITE.

In this action-packed series, Dick Grayson emerges from the shadows to become the leader of a fearless band of new heroes, including Starfire, Raven, Beast Boy and many others. Titans is a dramatic, live-action adventure series that will explore and celebrate one of the most popular comic book teams ever.

The Titans are coming back for more! DC Universe and Warner Bros. Television announced that its dramatic live-action adventure series Titans will be returning for a third season in fall 2020.

Premiering in 2018 as the first DC Universe Original Series, Titans is in the middle of a stellar second season where our heroes - Dick Grayson, Rachel Roth aka Raven, Kory Anders aka Starfire, Gar Logan aka Beast Boy, Hank Hall and Dawn Granger aka Hawk and Dove, Donna Troy aka Wonder Girl and Jason Todd aka Robin - are learning to co-exist as a new team while facing their toughest enemy yet: the deadly assassin Deathstroke, who threatens to tear this new Titans family apart once more.

How do you feel about this latest Titans news? Share your thoughts with us in the comments below and don’t forget to stay tuned for all the renew/cancel 2021-2022 and beyond news!