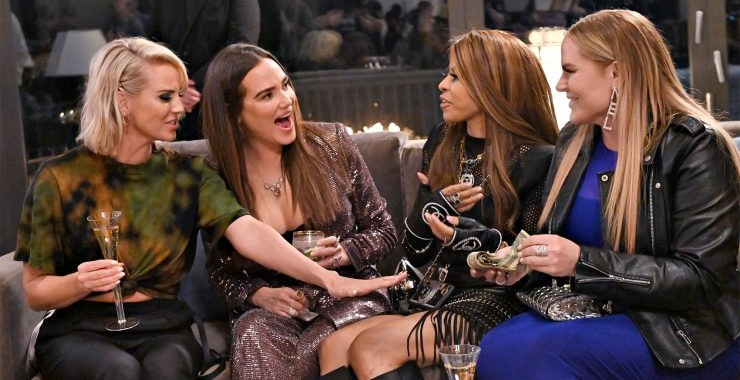 About The Real Housewives of Salt Lake City TV Show

· The ladies are joined by new housewife Jennie Nguyen.

· Always on the go, Lisa continues to be a busy working mom with her entrepreneurial children and loyal husband John at her side. She quickly finds herself in the center of the drama when the ladies constantly question her motives.

· Due to the pandemic, Mary's life has changed drastically, she has been forced to close the doors to her church and has started a faith-based podcast to fill the void. Friendships are tested when rumors about Mary become a topic of conversation after Lisa's friend reveals some unsettling allegations.

· While Heather's business Beauty Lab + Laser is thriving and on the precipice of growing into its second location, her life at home isn't quite as simple. With her oldest daughter ready to leave the nest, Heather struggles with breaking away from Mormon traditions and encouraging her daughter to live a secular life.

· After reconciling last year, Meredith and Seth are going strong, but there still appears to be a few cracks in their foundation. While Meredith is full steam ahead on her relationship with Seth, she finds herself on the outs with her BFF Lisa when questions about loyalty arise.

· Whitney struggles to balance it all as her budding business has pulled her away from her stay-at-home mom duties, causing a lull in her romantic life with her husband Justin. Tensions rise when Whitney comes between Lisa and the long standing friendship with one of her best gal pals.

· This season, Jen is focusing on channeling her inner Zen and mending the important relationships in her life, but her world comes crashing down when charges are brought against her. She is in for the fight of her life as she quickly realizes who her true friends are and questions who may have turned her in.

· Introduced to the group by Lisa, Jennie is not afraid to ask the tough questions and has no problem jumping right into the drama. A successful businesswoman and married mother of three, Jennie recently sold her medical spas to become a stay-at-home mom. With Jennie at home more, her husband Duy starts pressuring her for more kids and when she becomes reluctant, he is willing to explore all options including a sister wife.

· On the heels of the season finale, Bravo announces a season two pick-up for "The Real Housewives of Salt Lake City."

· An epic three-part reunion closes out the first season and kicks off on Wednesday, February 10 at 10pm ET/PT on Bravo.

"The Real Housewives of Salt Lake City" ranked as a top five new unscripted series on cable in 2020 among P18-49. The series premiere garnered 3.2 million total viewers across all platforms to date and earned Bravo's biggest series launch in nearly five years among P25-54 and P18-49.

The reunion kicks off with Jen revealing the issues that still haunt her and her husband Sharrieff, while Whitney addresses the rumors swirling in her marriage. Meredith confronts Jen about the awkward night at her house, leading to a heated conversation about Brooks. Tensions rise with Lisa and Mary when Lisa defends her friendship with Jen.

Mary reveals intimate details about her marriage and sets the record straight about her church. Jen finally puts the hospital comments to bed, meanwhile Meredith demands respect from the women about her marriage. Frustrations heighten between Lisa, Whitney and Heather, which finally pushes Lisa to her breaking point.

The husbands take the stage and Justin reveals shocking details about leaving the Mormon church, Robert addresses Jen and her husband, Sharrieff, and Whitney shares an update on her dad's sobriety. Emotions come to a head when Jen opens up about cultural insensitivities within the group, leaving the women startled and confused with Jen even more hurt than before.

How do you feel about this latest The Real Housewives of Salt Lake City news? Share your thoughts with us in the comments below and don’t forget to stay tuned for all the renew/cancel 2021-2022 and beyond news!