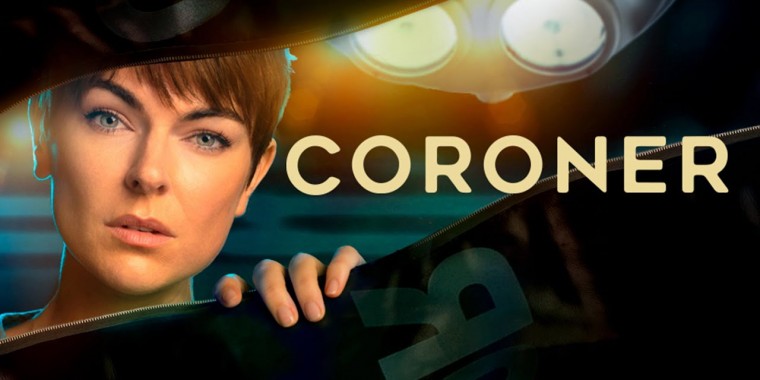 “Tell Me A Story” Makes Its Television Debut on Tuesday, July 28 at 9pm

Investigative Crime Drama “Coroner” Comes to The U.S. on Wednesday, August 5 at 9pm

June 16, 2020 (Burbank, CA) – The CW Network announced today that it is adding a quartet of alternative acquisitions to its summer line-up and has set its remaining summer 2020 premiere dates.

Two recent scripted acquisitions that will make their debut this summer and air through the fall include two seasons of both TELL ME A STORY and CORONER. The dark, re-imagined fairy tale series TELL ME A STORY will make its broadcast television debut on Tuesday, July 28 (9:00-10:00pm ET/PT), and the investigative drama CORONER will make its U.S. debut on Wednesday, August 5 (9:00-10:00pm ET/PT). Additionally, the half-hour British comedy DEAD PIXELS has moved into The CW’s Summer schedule, making its U.S. premiere on Tuesday, August 18 (8:00-8:30pm ET/PT).

In BEING REUBEN, fourteen year-old Reuben de Maid, a talented teen juggling social media stardom with real-life squabbling siblings, became an internet sensation after shooting to fame following an appearance on “Little Big Shots.” The Welsh teenager is a singer, influencer and make-up expert, and now has a high-profile career. In this fun, inspiring and warm-hearted new docuseries, we follow Reuben as he grows into his glamorous new life, while still grounded in his reality at home in Wales with siblings Coco and Sonny, and his mother Vicky. Being Reuben takes a passionate look at how a loving family has given their special teen the strength to stand out. BEING REUBEN stars Reuben de Maid and is from Ricochet Ltd., a Warner Bros. International Television Production Company, and Krempelwood Ltd., with executive producers Emma Walsh of Ricochet, Blair Krempel and Mark Wood.

Top chefs compete to make an amazing feast using leftovers and ingredients found in your fridge in the culinary competition FRIDGE WARS. Each episode, two top chefs are pitted against one another with a challenge to create extraordinary meals using only the ingredients taken from the fridges of ordinary families. We learn why dinnertime is a source of stress and panic when host Emma Hunter visits a family’s home and conducts a surprise fridge raid – taking everything from last week’s leftover lasagna to the condiment collection, and even snatching that questionable bag of frozen vegetables from 2016. The competition commences back at the FRIDGE WARS studio where the family’s fridge is recreated for both chefs. Once the clock starts, the chefs have 45 minutes to get dinner on the table – cooking with ingredients they’ve never seen for people they’ve never met! Inside their fridges, the chefs scour through the ingredients imagining what they can possibly pull together. But it’s the outside of the fridge that holds clues that guide the chefs to create a winning meal strategy. The family calendar, take-out menus, photos and maybe a gluten-free recipe are all potential clues to influence what meal will be a hit with these total strangers. When time’s up, the family takes their place at the dining room table and tastes each meal, scoring them on look, taste and originality – without knowing who cooked what. Those results go in the FRIDGE WARS vault and we do it all again with a new family and a new fridge full of challenges, this time upping the ante with a “What the Fridge (WTF) Challenge” that forces both chefs to adapt to a totally unique culinary crisis. With both families’ scores tabulated, the final scene reveals which chef successfully created a mouth-watering masterpiece to win the “Fridge Wars” battle. Hosted by comedian Emma Hunter, FRIDGE WARS is co-produced and co-created by The Gurin Company and the CBC. The show is executive produced by Tracie Tighe (CBC) and Emmy(R) and Rose d’Or winner Phil Gurin (The Gurin Company).

In The CW’s new satirical horror whodunit reality competition KILLER CAMP, 11 British strangers are shocked to discover they are not going on a fun new reality show called “Summer Camp” but actually participating in an over-the-top “murder” mystery series called “Killer Camp.” Camp Counselor Bobby will be the first to tell you that everything at Camp Pleasant is picturesque and perfect… except the minor problem of the brutal murders. In typical reality show fashion, there will be camaraderie, sex appeal, and lots of backstabbing… only this time, literally. As the campers play games to earn cash during the day, each night one of them will meet their untimely demise in ever more extreme, hilarious and inventive ways. Nobody can be trusted, as one of the campers among them is actually the secret murderer controlling the evil camp handyman “Bruce,” who executes the bloody hilarious death scenes. It’s up to the campers to determine who is pulling the strings, cast out the murderer and save themselves before it’s too late. Comedian Bobby Mair takes on presenting duties as Camp Counselor Bobby. Executive produced by Steph Harris, KILLER CAMP is from Tuesday’s Child and originally aired on ITV2.

TASKMASTER is an International Emmy and triple BAFTA nominated comedy game show starring comedian and actor Greg Davies in the title role of the all-powerful Taskmaster, who issues simple comedic and bizarre tasks to five regular contestants – usually comedians – with Alex Horne (the show creator) acting as the Taskmaster’s assistant. The tasks – usually performed in isolation, but occasionally in teams – are designed to encourage the players to think laterally and creatively. TASKMASTER is from Avalon (“Breeders,” “Everything’s Gonna Be Okay,” “Last Week Tonight With John Oliver,” “Catastrophe”) with executive producers Alex Horne, Richard Allen-Turner, Rob Aslett, James Taylor, Jon Thoday and Andy Devonshire (who also serves as the series’ director) with Hilary Rosen for UKTV.

CORONER is a character driven one-hour drama about Dr. Jenny Cooper (Serinda Swan, “Ballers”), a recently widowed, newly appointed coroner who investigates any suspicious, unnatural or sudden deaths in Toronto. Each death brings Jenny into a new arena in the city and sparks buzzworthy themes … Jenny taps into her intuition, as much as her intellect and heart, as she solves cases along with the help of Homicide Detective Donovan “Mac” McAvoy (Roger Cross, “Arrow,” “The X-Files”), a man who isn’t afraid of challenging the status quo; pathologist Dr. Dwayne Allen (Lovell Adams-Gray, “DC’s Legends of Tomorrow,” “Power Book II: Ghost”), his assistant River Baitz (Kiley May, “It: Chapter Two”); and Alison Trent (Tamara Podemski, “Run,” “Unsettled”), Jenny’s assistant who keeps it real. And while Jenny solves mysterious deaths, she also deals with clinical anxiety, a teenage son, Ross (Ehren Kassam, “Degrassi: Next Class,” “Degrassi: The Next Generation”), who is still grieving the death of his father, and the prospect of starting a new relationship with the enigmatic Liam (éric Bruneau, “Trop”). Soulful. Warm. Energy. Coroner. Executive produced by Morwyn Brebner (“Saving Hope,” “Rookie Blue”), Adrienne Mitchell (“Bellevue,” “Played”), Jonas Prupas (“Collision Course”), Brett Burlock (“Pure,” “Ascension”) and Peter Emerson (“Pure,” “The Firm”), CORONER is a CBC original series produced by Muse Entertainment, Back Alley Films and Cineflix Studios.

Created by Jon Brown (“Succession,” “Veep”), DEAD PIXELS follows Meg (Alexa Davies, “Mamma Mia! Here We Go Again”), Nicky (Will Merrick, “Poldark”) and Usman (Sargon Yelda, “Strike”) who are obsessed with the online fantasy game “Kingdom Scrolls.” Meg would happily cut a date short to go home and defend Castle Blackfinger. Nicky thinks the miscasting of Vince Vaughn as Tanadaal in the “Kingdom Scrolls” movie is an international outrage. And Usman has made a plywood lid for his child’s playpen, so he can play the game in peace. Oh, and Nicky definitely isn’t into Meg. That would be a cliché. DEAD PIXELS is split equally between the characters’ tragicomic real lives and their computer-animated misadventures in “Kingdom Scrolls.” Executive Produced by Jesse Armstrong, Sam Bain, Phil Clarke and Jon Brown, DEAD PIXELS is a Various Artists Limited production for Channel 4 that airs on E4 in the UK and distributed by BBC Studios.

Exploring an entirely new set of characters, season two of TELL ME A STORY features the stories of three legendary princesses – “Beauty and the Beast,” “Sleeping Beauty” and “Cinderella” – like you’ve never seen them before. Filmed on location in Nashville, season two of TELL ME A STORY stars Paul Wesley (“The Vampire Diaries”) as Tucker Reed, Carrie-Anne Moss (“The Matrix,” “Jessica Jones”) as Rebecca Pruitt, Odette Annable (“House,” “Supergirl”) as Maddie Pruitt, Eka Darville (“Jessica Jones”) as Beau Morris, Matt Lauria (“Kingdom,” “Friday Night Lights”) as Jackson Pruitt, Natalie Alyn Lind (“The Gifted,” “The Goldbergs”) as Ashley Rose Pruitt and Ashley Madekwe (“Salem,” “Revenge”) as Simone Garland. In addition, Danielle Campbell (“The Originals”) returns to TELL ME A STORY this season in a recurring role as Olivia Moon. Garcelle Beauvais (“Spider-Man Homecoming”) as Veronica Garland, Caleb Castille (“Wu Tang: An American Saga”) as Ron and Christopher Meyer (“The Affair”) as Derek round out the cast with recurring roles.

In addition to these late-summer series, four of The CW’s midseason and early-summer series will wrap their seasons including BURDEN OF TRUTH whose third season finale airs Thursday, July 9 (8:00-9:00pm ET/PT) followed by the second season finale of IN THE DARK on the same night (9:00-10:00pm ET/PT). The season two finale of BULLETPROOF is set to air Wednesday, July 29 (9:00-10:00pm ET/PT) and DC’S STARGIRL wraps its phenomenal first season on Tuesday, August 11 (8:00-9:00pm ET/PT).

The following is The CW’s schedule of late-summer premieres. All times ET/PT:

A procedural drama created for television by Morwyn Brebner ( Saving Hope), based on the best-selling book series by M.R. Hall. The series follows Jenny Cooper, a former ER doctor and newly appointed coroner investigating suspicious deaths. Suffering from anxiety and recently widowed with a teenage son, Jenny is a woman of action driven by an intense desire for the truth.

The investigative procedural CORONER, starring Serinda Swan, will now make its season three debut on The CW on Thursday, August 19 (8:00-9:00pm ET/PT), followed by an original episode of THE OUTPOST (9:00-10:00pm ET/PT).

Wondering how your other CBC, The CW shows are doing? Check out the CBC, The CW 2021 TV scorecard page, where you can find the cancel/renew status of all CBC, The CW TV shows!

How do you feel about this latest Coroner news? Share your thoughts with us in the comments below and don’t forget to stay tuned for all the renew/cancel 2021-2022 and beyond news!