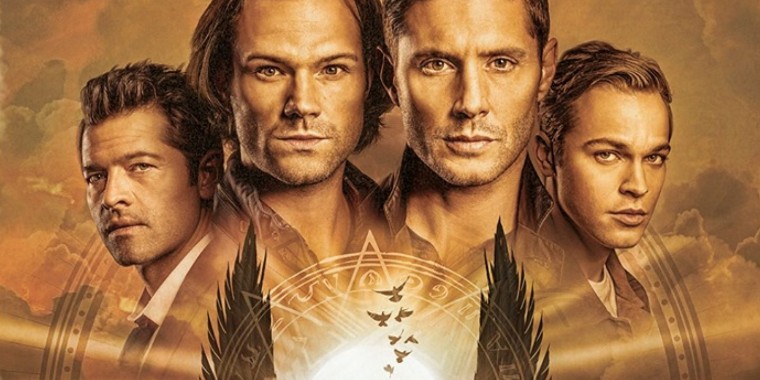 On Thursday, October 8, “Supernatural” Begins the Final Leg of Its 15-Season Journey Followed by Season Three Debut of Fantasy Drama “The Outpost”

August 17, 2020 (Burbank, CA) – The CW Network will launch its Fall 2020 primetime schedule beginning mid-September featuring a lineup of acquired programming such as DEVILS and SWAMP THING, returning original series PANDORA and THE OUTPOST as well as the highly anticipated conclusion of the long-running and beloved series SUPERNATURAL.

Iconic DC character SWAMP THING makes its network television debut with a special 90-minute episode on Tuesday, October 6 (8:00-9:30pm ET/PT). The following week, SWAMP THING (8:00-9:00pm ET/PT) is joined on the night by the second season debut of the reimagined fairy tales of TELL ME A STORY (9:00-10:00pm ET/PT).

Fantasy adventure series THE OUTPOST returns for its third season beginning Thursday, October 8 (9:00-10:00pm ET/PT), following the return of SUPERNATURAL for the final seven episodes of the 15-year series (8:00-9:00pm ET/PT). The long-running journey of Sam and Dean Winchester reaches the end of the road on Thursday, November 19 (9:00-10:00pm ET/PT), following a special celebration of the Winchesters and the angels and demons, the deities and monsters that have made the series so beloved on SUPERNATURAL: THE LONG WAY HOME (8:00-9:00pm ET/PT).

The following is The CW’s Fall 2020 premiere schedule. All times ET/PT:

Twenty-eight years ago, Sam Winchester (Jared Padalecki) and Dean Winchester (Jensen Ackles) lost their mother to a mysterious and demonic supernatural force. Subsequently, their father John (Jeffrey Dean Morgan) raised them to be soldiers. He taught them about the paranormal evil that lives in the dark corners and on the back roads of America…and he taught them how to kill it.

Sam (Jared Padalecki) and Dean (Jensen Ackles) have spent the last nine years battling the things that go bump in the night. Over the years, with the help of the fallen angel Castiel (Misha Collins), and the King of Hell, Crowley (Mark A. Sheppard), the Winchesters have straddled the line between good and evil.

The epic journey of the Winchester brothers comes to a close as SUPERNATURAL enters its final season. Sam (Jared Padalecki) and Dean (Jensen Ackles) and the angel Castiel (Misha Collins) have conquered monsters, demons, Heaven and Hell, and in the show’s 14th season, the Winchesters grappled with the Archangel Michael possessing Dean. In a valiant act, Sam and Dean’s surrogate son Jack (Alexander Calvert) destroyed his soul to redeem his adoptive father. But this proved to be a fatal error, leading to the accidental death of Mary Winchester. The 14th season also featured the return of John Winchester (Jeffrey Dean Morgan) for the show’s historic 300th episode. Now, as their 15th and final season comes to a close, Sam and Dean find themselves facing a threat beyond anything they’ve ever grappled with … anything they’ve ever imagined: God himself. SUPERNATURAL is from Warner Bros. Television in association with Wonderland Sound and Vision, with executive producers Robert Singer, Andrew Dabb, Eugenie Ross-Leming, Brad Buckner and Bob Berens.

How do you feel about this latest Supernatural news? Share your thoughts with us in the comments below and don’t forget to stay tuned for all the renew/cancel 2021-2022 and beyond news!