Home | Renewed | The Casagrandes Renewed For Season 3 By Nickelodeon! 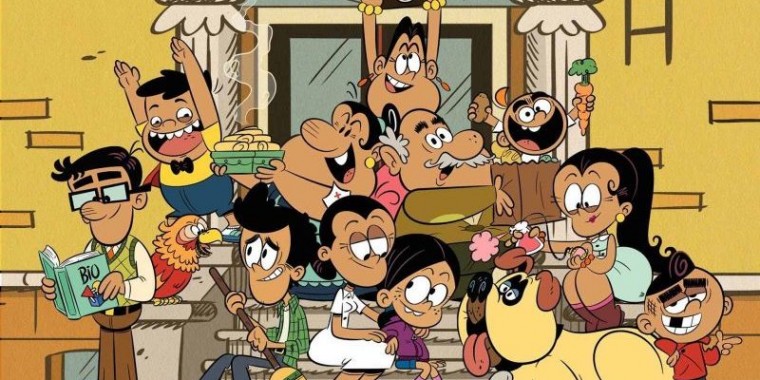 Nickelodeon Picks up Third Season of The Casagrandes

Hit-Animated Series Ranks Number Two Across All Television with Kids 2-11 on the Heels of Sister Series, The Loud House

Nickelodeon, the number-one network for kids, has greenlit a third season of The Casagrandes, which will find Ronnie Anne and her family members on a variety of adventures while exploring different areas of the city. A spinoff of Nickelodeon’s top-rated animated series The Loud House, Emmy Award-winning The Casagrandes has ranked as the number two animated property across television with Kids 2-11 since its Oct. 2019 debut. Season three is currently in production by Nickelodeon Animation Studio.

“Our audience has loved the diverse characters, relatable stories and rich animation found in The Casagrandes since the series debuted last year,” said Ramsey Naito, President, Nickelodeon Animation. “The success of the show is due to the creative leadership who continue to showcase the love and laughter of this family, living in an environment that reflects the global world we live in today.”

Since its debut, The Casagrandes has told stories infused with humor, heart and the everyday escapades of family and friends. Season two of The Casagrandes kicks off with “Fails from the Crypt,” where the kids try to break a local record for staying in the cemetery overnight. Followed by “Bad Cluck,” where a haunted chicken is pestering the Casagrandes, on Friday, Oct. 9, at 7:30 p.m. (ET/PT) on Nickelodeon. Season two will debut internationally later this year.

Emmy Award-winning The Casagrandes tells the story of Ronnie Anne, who moves to the city with her mom and older brother to live with their big, loving family, the Casagrandes. A spinoff of The Loud House, the series showcases the culture, humor, and love that’s part of growing up in a multigenerational Mexican-American family. The series is executive produced by Michael Rubiner. Miguel Puga serves as co-executive producer, Alan Foreman is supervising producer and Miguel Gonzalez serves as art director, with award-winning cartoonist Lalo Alcaraz as consulting producer and cultural consultant.

About The Casagrandes TV Show

Eugenio Derbez (Overboard), Ken Jeong (Dr. Ken) and Melissa Joan Hart (Sabrina the Teenage Witch) have joined the cast of Nickelodeon's original animated series The Casagrandes, which tells the story of the Casagrandes, a big, loving and multi-generational family living together in the city. A companion to the Emmy Award-winning, The Loud House, the new 2D-animated series highlights the culture, humor, and love of growing up in a multi-generational Mexican-American family.

The series is set to debut October 2019 on Nickelodeon."The Casagrandes highlights the humorous stories and moments of daily life that every kind of family can relate to, and we're thrilled to have Eugenio, Melissa and Ken on board to make these characters as relatable and funny as can be," said Ramsey Naito, EVP, Animation Production and Development, Nickelodeon.

"Nickelodeon will also continue to dive deeper into the characters' lives in The Loud House, a proven hit with our audience, with a brand-new fifth season."Said Derbez: "When I was approached to be part of The Casagrandes, it was an easy yes. It's culturally specific but will appeal to any kid. It's outrageous and funny and has heart. This is what a LatinX kid show should look like, big fun and mainstream with some Latin spice. I'm grateful to Nickelodeon for asking me to be a part of it."Said Hart: "I will finally be a hero in my own home now that I get to be a part of The Casagrandes animated show. My boys have been huge fans of The Loud House and this is the first project of mine they are truly excited to see."In The Casagrandes, Derbez lends his voice as Dr. Santiago, a physician living and working in Peru, who is Ronnie Anne and Bobby's father; Jeong voices Mr. Stanley Chang, a friendly and patient train conductor; and Hart voices Mrs. Becca Chang, a quirky, smart and funny zoologist and wife to Stanley.Izabella Alvarez (Westworld) voices the title role of 11-year-old Ronnie Anne, joining Carlos PenaVega (Big Time Rush) who continues to lend his voice as Bobby. Additional new cast members include Leah Mei Gold (Legion) as 12-year-old Sid Chang, Ronnie Anne's new friend, and Lexi Sexton as Adelaide Chang, Sid's 6-year-old little sister.

In The Casagrandes, Ronnie Anne's new life promises to be an adventure, especially now that she lives under one roof with her grandparents, aunt, uncle, cousins, and a sass-talking parrot. As if that weren't enough excitement, she lives over the family-run Mercado, which is a gathering place for everyone in the neighborhood.Derbez, Jeong and Hart will portray these new characters alongside: Carlos Alazraqui (The Fairly OddParents) as Carlos, Roxana Ortega (The League) as Frida, Alexa PenaVega (Spy Kids) as Carlota, Jared Kozak (Born this Way) as CJ, Alex Cazares (The Boss Baby: Back in Business) as Carl; Ruben Garfias (East Los High) as Hector, "Abuelo;" Sonia Manzano (Sesame Street) as Rosa, "Abuela;" and Sumalee Montano (Nashville) as Maria.Nickelodeon has also greenlit a fifth season (26 episodes) of The Loud House, where big changes are on the horizon. In season five, Lincoln and his friends' graduate elementary school and face new challenges and adventures as they tackle the trials and tribulations of middle school, each sister moves up a grade and Lori decides if she's ready to leave home for college. The new season will also showcase holiday themed episodes, introduce new characters, locations and more.Season four of The Loud House kicks-off Monday, May 27, at 1:00 p.m. (ET/PT) with a special half-hour episode dedicated to the Casagrande family. In The Loud House featuring The Casagrandes, "Friended!" Ronnie Anne makes friends with Sid, a girl whose family wants to rent the apartment upstairs. When it looks like another couple might get it first, the girls resort to sabotage to dissuade them.

Season four premieres continue Monday, June 10, through Thurs., June 13, at 11:00 a.m. (ET/PT) and Monday, June 17, through Thurs., June 20, at 11:00 a.m. (ET/PT) on Nickelodeon.The Casagrande family was first introduced in the The Loud House special, "The Loudest Mission: Relative Chaos." The family appeared throughout the third season of The Loud House and have a five-episode arc coming up in season four, with crossover episodes also planned in season five. The Loud House debuted May 2016 and centers on 11-year-old Lincoln Loud and his ten sisters as he gives an inside look at what it takes to survive the chaos of a huge family.The Loud House is currently executive produced by Mike Rubiner (KaBlam!). Karen Malach serves as producer and Kyle Marshall is supervising producer. The Casagrandes is also executive produced by Rubiner, with Malach as producer. Award-winning cartoonist Lalo Alcaraz (Coco) serves as a cultural consultant and consulting producer and Alan Forman is supervising producer.

How do you feel about this latest The Casagrandes news? Share your thoughts with us in the comments below and don’t forget to stay tuned for all the renew/cancel 2021-2022 and beyond news!