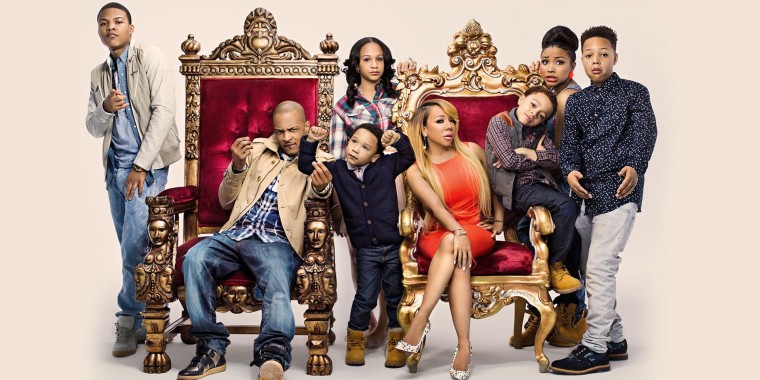 New York, NY - January 14, 2021 - VH1 today announced that the hit series "T.I. & Tiny: Friends & Family Hustle" has been greenlit for a new season. Kicking off in Spring 2021, the series follows the families through life in Atlanta, the epicenter of political change- during the greatest social movement of our time - using their platforms to fight against racial injustice. They maintain their hustles through a global pandemic, while also welcoming new lives into the world and rekindling old friendships.

· In the midst of the pandemic, Tip "T.I." Harris hit the big 4-0, released another hit album, became a grand-dad and celebrated his 10-year wedding anniversary with Tiny. He's also participating in community and social initiatives - Buy Back the Block, focusing on the renovations for the legendary Bankhead Seafood - a community landmark, and the Us or Else reparations initiative. Additionally, he became a professor at Clark Atlanta University teaching a course on the "Business Of Trap Music."

· Tameka "Tiny" Harris is excited about becoming a grandmother now that Zonnique has officially embarked on the journey of motherhood. She is executive producing a new talk show and working on numerous philanthropic efforts of her own. As they all try to balance it all - from family, to careers, to business ventures- there is never a dull moment in the Harris family household, especially with Messiah, Deyjah, King, Major and Heiress all under the same roof during the pandemic.

· Fresh off of an epic music battle, Monica and her kids have finally moved into their permanent home. With the divorce finalized, she's getting music from her new album Trenches out into the world. She's also moving on to focus on the state of her community, working with Stacey Abrams on voting initiatives in these politically charged times.

· Toya Wright ended last season saying "Yes!" to Robert "Red" Rushing and was ready to plan a beautiful wedding. As the global pandemic puts those plans on pause, she and Red will have to re-focus on bringing the final pieces together and safely reunite their immediate family in order to celebrate. Toya's also watching daughter Reginae Carter take the next steps in her adult life as she recently purchased a home, starred in a few movies, launched a clothing company, and became a Tik Tok sensation.

· After countless therapy sessions and welcoming a baby boy Tysun into the world, LeToya Luckett and Tommicus "Tommi" Walker continue to struggle to get back to the love that brought them together in the first place.

The season will also feature appearances by friends of the Harris family, Killer Mike and Shekinah.

How do you feel about this latest T.I. & Tiny: Friends and Family Hustle news? Share your thoughts with us in the comments below and don’t forget to stay tuned for all the renew/cancel 2021-2022 and beyond news!