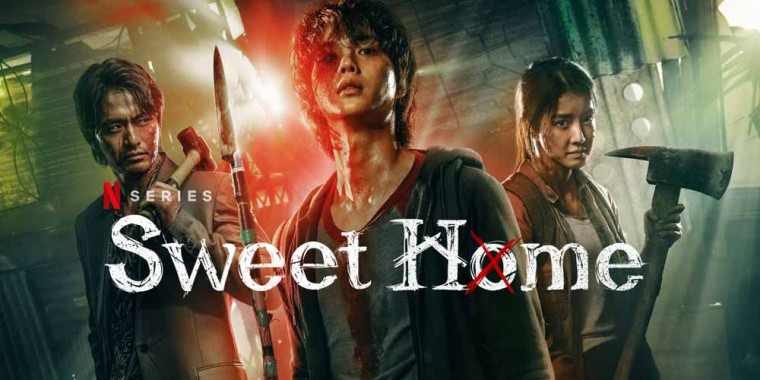 Netflix today confirms the back-to-back production of Sweet Home Seasons 2 and 3, with an expanded storyline and cast.

Beloved stars Song Kang and Lee Jin-uk will return, along with the original cast of Lee Si-young, Ko Min-si and Park Kyu-young. They will reunite with hit director Lee Eung-bok to tell the unfinished story of the survivors of Green Home. Newly confirmed cast members Yoo Oh-seong, Oh Jung-se, Kim Moo-yeol and Jung Jin-young round up the ensemble.

“Season 2 will include a new setting, and the technical details that we couldn’t refine in Season 1 will be further honed in Season 2,” said the director, hinting at a wider franchise universe and even more stunning visuals.

When Season 1 landed on Netflix in 2020, its terrifying monsters and clever storytelling set a new benchmark in the creature feature genre, winning rave reviews from fans. South China Morning Post describes it as "grisly fun" while Decider made the call to stream it because "Sweet Home distinguishes itself by its setting and its monsters."

The series went on to win international awards such as the 2021 Asian Academy Creative Awards (AACA) and the 3rd Asia Contents Awards.

Adapted from a popular webtoon of the same name, Sweet Home is a suspenseful series based on the unique premise of a world in which people turn into monsters that reflect their own individual desires. After losing his family, reclusive high school student Cha Hyeon-su moves into a new apartment where he faces these bizarre and shocking circumstances.

Netflix has also confirmed casting for the show. Hyeon-su is played by Song Kang, who gained recognition as a next-generation star for his performance as Sun-oh in the Netflix original series Love Alarm. Lee Jin-uk, whose explosive acting in the drama Voice proved his unique brilliance as a character actor, portrays the mysterious Pyeong Sang-uk. Lee Si-young, who is known for her intense acting in No Mercy, plays the tough-as-nails Seo Yi-gyeong, an original character created for the Netflix adaptation, which is expected to keep fans of the webtoon guessing.

How do you feel about this latest Sweet Home news? Share your thoughts with us in the comments below and don’t forget to stay tuned for all the renew/cancel 2021-2022 and beyond news!