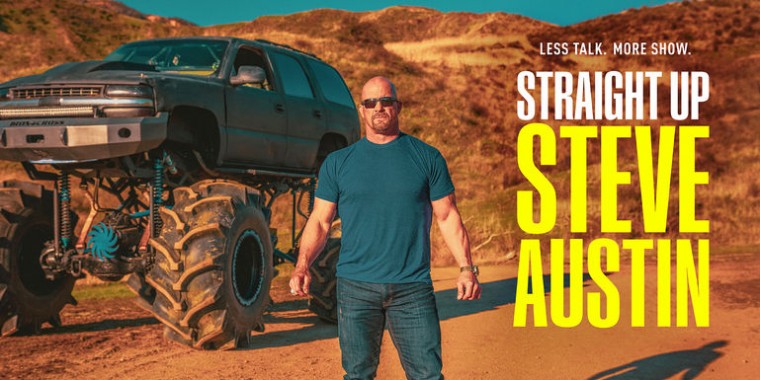 NEW YORK – Dec. 14, 2020 – USA Network is set to bring audiences straight up good times and family fun in the new year as the network unveiled January premiere dates for three of its unscripted series, including the return of the breakout hit “Straight Up Steve Austin” for its second season on Monday, January 11 at 11pm ET/PT; new episodes of the favorite series “Chrisley Knows Best” on Thursday, January 21 at 10pm ET/PT, immediately followed by the launch of the new family docu-comedy “The Rev” premiering at 10:30pm ET/PT.

In “Straight Up Steve Austin,” WWE Hall of Famer “Stone Cold” Steve Austin and a celebrity guest get real, heading out to different cities across America to take part in one-of-a-kind adventures, while swapping stories about their lives and careers. It’s a unique twist on the standard interview show, with no studio, no couch and no cue cards — just a straight up good time and good old-fashioned American fun. Season one was 2019’s #1 new unscripted cable series for men between the ages of 18-49 and 25-54.*

Season eight of “Chrisley Knows Best” continues to follow the entertaining life of outspoken patriarch Todd Chrisley and his over-the-top Southern family. Always by Todd’s side is his loving wife Julie, their charming, strong-willed children Chase, Savannah and Grayson, darling granddaughter Chloe and Todd’s beloved mother, Nanny Faye. Throughout the rest of this season, the family antics don’t stop as Todd and Chase gear up for a road trip, Nanny Faye packs her bags for a sizzling ‘seniors cruise,’ Todd goes on a mission to prove to Julie that he ‘still has it’ after 25 years of marriage, Grayson has dreams of becoming a storm chaser, and Savannah plans her next exciting personal and professional steps.

In this hilarious, melodic and inspirational new series, there’s never a dull moment in the world of larger-than-life Pastor Richard Hartley. When he isn’t preaching and inspiring his congregation at his Long Island, NY church, he’s dealing with his rambunctious and loving family… all while utilizing his musical skills to make the church’s choir top notch. Having spent years travelling the globe working with incredible choirs and A-list musicians, Richard is now focused on his hometown choir and, with the help of his wife Stacey, trying to get his millennial children, Judea and Jordan, out of the house so that they can build their own dreams.

“The Rev,” which consists of eight half-hour episodes, is produced by This is Just a Test, with Aengus James, Colin King Miller and Jen McClure-Metz executive producing.

How do you feel about this latest Straight Up Steve Austin news? Share your thoughts with us in the comments below and don’t forget to stay tuned for all the renew/cancel 2021-2022 and beyond news!