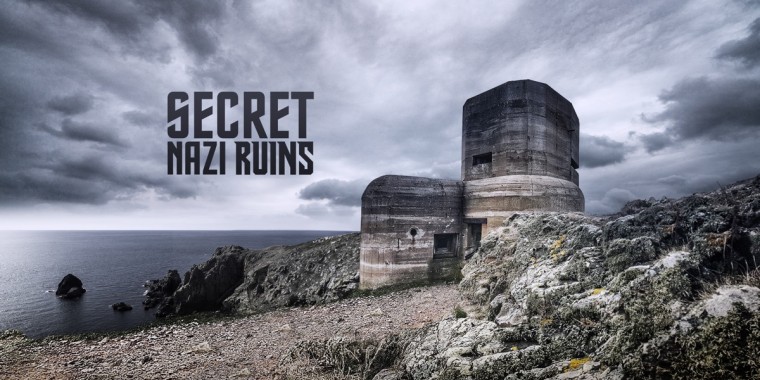 Nazi Germany left their ominous footprint throughout the world, from tunnels and towers to underground bases and communication centers. To this day, the structural remains of Nazi Germany lie waiting to reveal the truth about Hitler's tactics and guard clues about the nefarious plots he was planning to carry out. In an all-new season of the Science Channel series, SECRET NAZI RUINS, experts investigate these abandoned sites to dissect and reveal their true purpose and what covert projects they were intended for.

History books claim that World War II began in 1939, but evidence shows Germany's preparation for the war began years earlier. Long before the first shot, Hitler began a slow build up in the East with secret military projects under the guise of waterway projects such as dams and drawbridges. By 1938, Germany had established miles of bunkers, tunnels and factories built and ready for war. Experts investigate these mysterious structures and abandoned bases to piece together forgotten history and secrets few knew about -- until now.

Throughout this season of SECRET NAZI RUINS, experts look to the terrifying yet truly groundbreaking sciences and technologies that stemmed from the dark imaginations of the Nazi elite in Peenemunde, a small German seaside city overtaken by the Nazis at the start of the war. What terrors might they have unleashed had their position not been betrayed? And would it have been a weapon of mass destruction that ended the war had Hitler believed in the center from the beginning?

Deep in the Owl Mountains of Poland lies a forgotten Nazi complex, the purpose of which remains largely unknown. Built sometime between 1943 and 1945, some have suggested its use was to shelter thousands of people from Allied bombs. But much of the concrete is still unaccounted for -- could there be more tunnels no one has yet found? And even deeper secrets we have yet to uncover?

How do you feel about this latest Secret Nazi Ruins news? Share your thoughts with us in the comments below and don’t forget to stay tuned for all the renew/cancel 2021-2022 and beyond news!