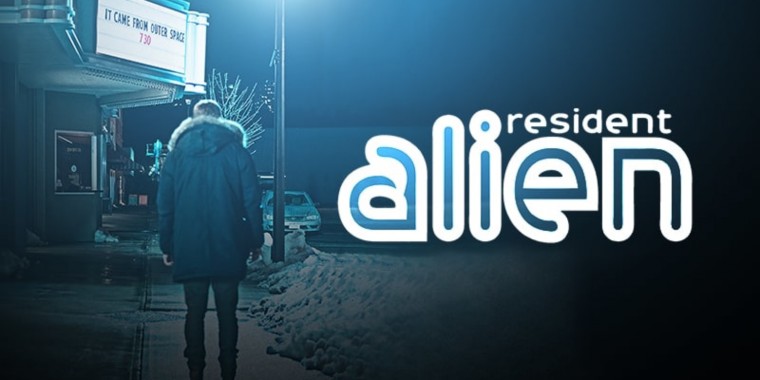 Harry is staying a bit longer.

The second season of the comedy-drama is slated to premiere in early 2022.

“With Resident Alien, everything just came together in perfect harmony – a script by Chris Sheridan that leapt off the page, a lead performance by Alan Tudyk, whose nuance between comedy and menace was pitch perfect, and a team of producers, cast and crew who were all striving to do something great. The appeal of this show transcended the sci-fi genre in a way that enabled us to bring in a broader audience, and as the series continues we hope to encourage more and more fans to discover Harry’s very particular perspective on humans.”

SYFY SETS JAN. 26 FOR SEASON TWO LAUNCH OF "RESIDENT ALIEN" AND SERIES PREMIERE OF "ASTRID & LILLY SAVE THE WORLD"

· Mid-season finale on March 16, continues with additional episodes in summer

· Ranks as the #1 new cable series in 2021 across all key demos as well as one of the top cable dramas of the year.

· Based on the Dark Horse comics, SYFY's "Resident Alien" follows a crash-landed alien named Harry (Alan Tudyk) whose secret mission is to kill all humans. In season two, Harry is once again stranded on Earth where he must confront the consequences of having failed his people's mission to destroy the human race. On his new quest to protect the people of Earth, Harry struggles to hold on to his alien identity as his human emotions grow stronger by the day. In an adventure that takes Harry and Asta (Sara Tomko) all the way to New York City, Asta brings Harry into the arms of someone he can call family. While back in Patience, Sheriff Mike (Corey Reynolds) and Deputy Liv (Elizabeth Bowen) find themselves closer to unraveling the mystery of Sam Hodges's murder.

Based on the Dark Horse comic, SYFY's RESIDENT ALIEN follows Harry, an alien played by Alan Tudyk ("Rogue One," "Firefly") that crash lands on Earth and passes himself off as a small-town human doctor. Arriving with a secret mission to kill all humans, Harry starts off living a simple life... but things get a bit rocky when he's roped into solving a local murder and realizes he needs to assimilate into his new world. As he does so, he begins to wrestle with the moral dilemma of his mission and asking the big life questions like: "Are human beings worth saving?" and "Why do they fold their pizza before eating it?" Sara Tomko ("Once Upon A Time"), Corey Reynolds ("The Closer"), Alice Wetterlund ("Silicon Valley") and Levi Fiehler ("Mars") star as the big personalities of small-town Patience, Colorado.

The stranded, curious alien known as Dr. Harry (Alan Tudyk) tends to patients in the sleepy town of Patience, Washington. Questions about the town's previous doctor arise when a strange briefcase is found leading to the crash of the alien vessel sent to destroy the Earth.

How do you feel about this latest Resident Alien news? Share your thoughts with us in the comments below and don’t forget to stay tuned for all the renew/cancel 2021-2022 and beyond news!