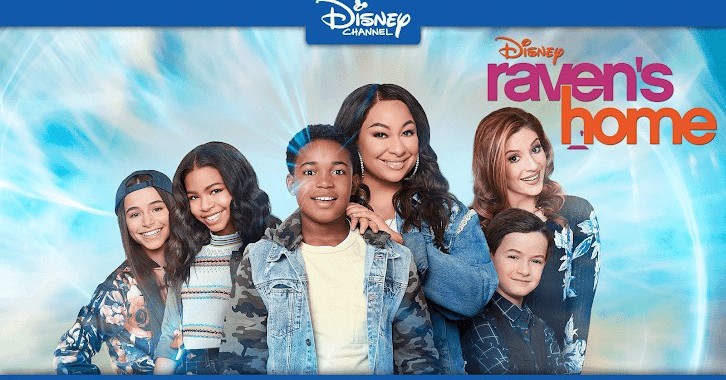 Ayo Davis, president, Disney Branded Entertainment, said, "Ever since the debut of 'That's So Raven,' Raven-Symoné has been an incredibly important part of the Disney Channel family. With 'Raven's Home,' her talent and special brand of humor have continued to resonate with kids and families, and we're excited to see what lies ahead for Raven in season five. This beloved series is in good hands with the experienced team of Raven, Scott Thomas, Jed Elinoff and Anthony C. Hill leading an amazing cast and crew."

The beloved comedian Sheridan introduced today's generation of Raven Baxter fans to Victor when he guest starred in the season two episode "Just Call Me Vic." In the fifth season, Raven and Booker move back to San Francisco to help take care of her dad after a mild heart attack. Now Raven finds herself parenting her parent, raising her young cousin and settling into life in her old hometown. Meanwhile, Booker is "the new kid" at Raven's old high school and has to keep his visions a secret from a new group of friends.

Developed by Thomas and Elinoff, the series was created by "That's So Raven" creators Michael Poryes and Susan Sherman, is a production of It's a Laugh Productions, Inc., and carries a TV-G parental guideline.

"Raven's Home" is a spinoff of the iconic Disney Channel comedy "That's So Raven" (2003-2007), which followed the whimsical, somewhat psychic teen Raven Baxter. Now, Raven is a divorced single mom of teen twins, Nia and Booker, and she's not the only one in the family who can catch glimpses of the future - her son Booker has inherited her gift. Just like his mom, Booker can see just enough of the future to try and change it. Hilarity ensues as Raven and Booker try to understand their unpredictable visions while navigating a hectic but loving household that also includes Raven's longtime best friend Chelsea and her son Levi, and Nia's best friend Tess.

"Raven's Home" star and executive producer Raven-Symoné made her television directing debut in Season 3 of the series. The season was also highlighted by guest stars Jaleel White ("Me, Myself and I," "Family Matters"), Jonathan McDaniel ("That's So Raven") and Charles Robinson ("Night Court," "K.C. Undercover"). The stories pick up with Raven Baxter, her family and friends pursuing their creative dreams. Booker, Nia and Tess form a music group, The Chi-Lective, with Levi as their music video director, Raven is determined to launch her fashion line, while Chelsea has finally found her niche as a life coach. "Raven's Home" stars Raven-Symoné ("That's So Raven"), Issac Ryan Brown (ABC's "black-ish" and Disney's "Kim Possible"), Navia Robinson ("Being Mary Jane"), Jason Maybaum (Disney's "Freaky Friday"), Sky Katz and Anneliese van der Pol ("That's So Raven"). Additionally, Johnno Wilson ("You Kiddin' Me") guest stars this season as Levi's dad, Garrett.

In the fourth season premiere of the hit summer camp comedy "BUNK'D," former counselor Lou Hockhauser takes the mantle as camp director as she and her veteran campers, Destiny, Finn and Matteo, welcome three new Camp Kikiwaka members - Noah (an upbeat actor from Hollywood), Ava (a tenacious counselor from the big city) and Gwen (who has spent her entire life living off the grid). "BUNK'D" stars Miranda May ("The Heartbreak Kid," "Samantha Who?"), Raphael Alejandro ("Once Upon a Time"), Will Buie Jr. ("Daytime Divas"), Mallory James Mahoney (Disney's "Adventures in Babysitting"), Shelby Simmons ("Andi Mack"), Scarlett Estevez ("Daddy's Home") and Israel Johnson ("Schooled").

That's So Raven spinoff series. The sitcom picks up with Raven and Chelsea, who are now divorced single mothers raising their two separate families in one chaotic, but fun household full of friends. When one of Raven's kids begins to show signs that they have inherited her trait of catching glimpses of the future, the already hectic household gets turned upside down, keeping even Raven on her toes.

How do you feel about this latest Raven’s Home news? Share your thoughts with us in the comments below and don’t forget to stay tuned for all the renew/cancel 2021-2022 and beyond news!