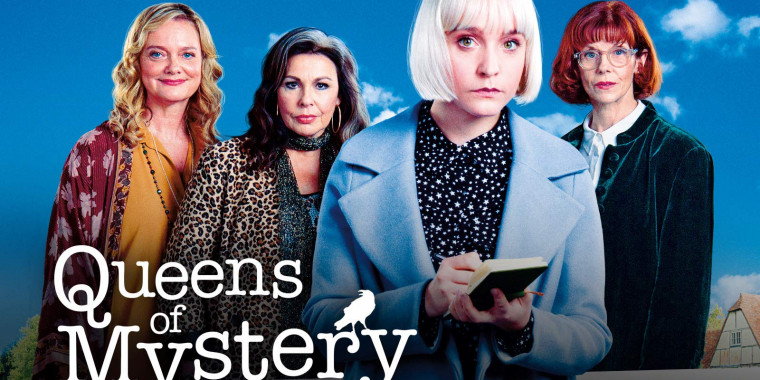 About Queens of Mystery TV Show

"Whimsical whodunnit" - What to Watch

New York, NY - Thursday, December 2 - One of Acorn TV's most popular crime series, Queens of Mystery returns for season two on Monday, January 10 on Acorn TV in the US and Canada. Three two-part mysteries are set to debut weekly, as back-to-back episodes, with the final premiering on Monday, January 24.

Called a "surefire crowd-pleaser" by the Los Angeles Times and created for television by writer Julian Unthank (Doc Martin, New Tricks), Queens of Mystery follows the adventures of three crime-writing sisters Beth (Sarah Woodward, The Pale Horse), Cat (Julie Graham, The Bletchley Circle, Shetland, Penance), and Jane (Siobhan Redmond, Unforgotten) Stone and their 28-year-old niece, Detective Sergeant Mattie Stone (Florence Hall for S2, The Princess Switch: Switched Again). Using their knowledge of crime - both real world and fictional - together they solve murders in the picturesque English region of Wildemarsh. But no matter how many cases they are able to crack, the unsolved mystery that haunts all the characters is that of Mattie's mother's disappearance twenty-five years ago.

The second season of Queens of Mystery is scripted by Julian Unthank and Matthew Thomas (Marcella, Agatha Raisin) with Oscar(R) and BAFTA(R) winner Ian Emes returning as lead director. Theresa Varga joins as 2nd director. Sly Fox Productions' Linda James and Savannah James-Bayly are producing with Tim Vaughan as associate producer. Also returning from the filmmaking team are Paul Englishby (Luther, The Witness for the Prosecution) as composer and Charlie Knight (The Bodyguard, Ted Lasso) as costume designer. The director of photography is Sarah Bartles-Smith (Call the Midwife), production designer Maria Dagher (The Covenant), and hair and make-up designer Lisa Halstead (Back).

Wondering how your other Acorn TV shows are doing? Check out the Acorn TV 2021 TV scorecard page, where you can find the cancel/renew status of all Acorn TV TV shows!

How do you feel about this latest Queens of Mystery news? Share your thoughts with us in the comments below and don’t forget to stay tuned for all the renew/cancel 2021-2022 and beyond news!