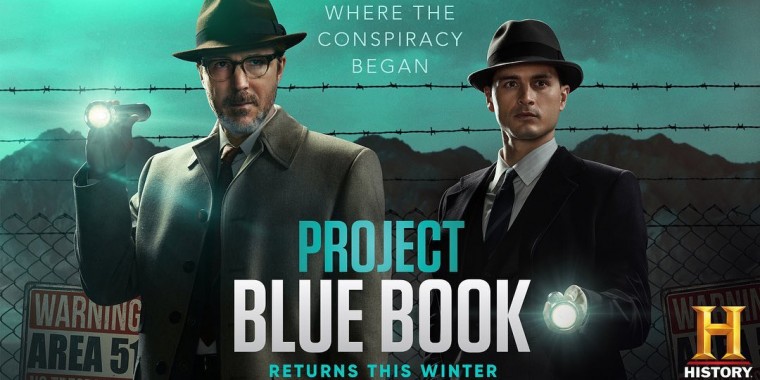 History has cancelled Project Blue Book after two seasons. The cable network has opted not to move forward with Season 3.

At a time when UFOs and related phenomena have piqued worldwide attention and public intrigue, season two will take a dramatic look back at where the UFO conspiracy first began and highlight real cases that ignited America’s fascination around the topic. Based on the true, top secret investigations into Unidentified Flying Objects (UFOs) and related phenomena conducted by the United States Air Force from 1952-1969, each episode will draw from the actual case files blending UFO theories with authentic historical events from one of the most mysterious eras in United States history.

“UFOs have sparked a cultural conversation that has infiltrated recent news cycles, but the truth is, the allure with this topic goes back decades since the creation of Project Blue Book,” said Eli Lehrer, Executive Vice President and General Manager for HISTORY. “Our drama series delves into infamous cases like Roswell and Area 51 and offers a retrospective look at the rich history behind UFO phenomena. Through this season’s entertaining and compelling storytelling, viewers will become immersed in these strange occurrences that are inspired by real events.”

“Project Blue Book” is inspired by the personal experiences of Dr. J. Allen Hynek (Aidan Gillen), a brilliant college professor recruited by the U.S. Air Force to spearhead this clandestine operation (Project Blue Book) that researched thousands of cases, over 700 of which remain unsolved to this day. The ten-episode sophomore season will find Dr. Hynek and Captain Michael Quinn (Michael Malarkey) on a dangerous quest for the truth and delve deeper into themes of global conspiracy, touch on how UFOs have impacted the evolution of our nation’s military practices and technology and lean into the nostalgia of the 1950s. It will also kick-off with a deep dive into two of the most well-known UFO cases in US history: Roswell, New Mexico where a rancher claimed to have found mysterious wreckage on his property thought to be a UFO and Area 51, a government run location in Nevada historically rumored to be a magnet for paranormal events and UFO-related activity.

Other episodes this season take Hynek and Quinn further into the secrets and conspiracies of the 1950s, with stories about the haunting Skinwalker Ranch (a 512-acre property reputed to be the site of numerous paranormal and UFO-inspired events), the mysterious Kelly-Hopkinsville encounter (where a rural Kentucky family claimed to have been visited by aliens), the CIA’s infamous mind control experiments, and an episode which follows Hynek in his role as expert consultant to the film Close Encounters of the Third Kind.

“Project Blue Book” is an A+E Studios production in association with Compari Entertainment, a division of ImageMovers. Robert Zemeckis (Contact, Back to the Future, Forrest Gump), Jack Rapke (Cast Away, Flight) and Jackie Levine (Allied, The Walk) are executive producers for Compari Entertainment. David O’Leary serves as creator, executive producer and writer, with Sean Jablonski (“Suits,” “Nip/Tuck”) serving as showrunner, executive producer and writer. Barry Jossen is also an Executive Producer. Adam Fratto serves as the Creative Executive for HISTORY.

How do you feel about this latest Project Blue Book news? Share your thoughts with us in the comments below and don’t forget to stay tuned for all the renew/cancel 2021-2022 and beyond news!