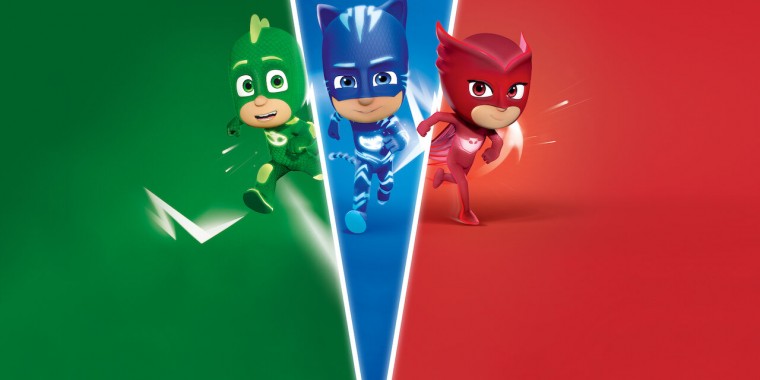 Entertainment One (eOne)'s hit preschool series PJ Masks returns for season five with the iconic trio, Catboy, Owlette, and Gekko, and epic new adventures. The new season premieres August 13 at 1:00 p.m. ET/PT on Disney Junior and DisneyNOW, followed by six consecutive weeks of premieres, and introduces new characters, superpowers, vehicles and more. With more feature episodes than ever before, this is a season PJ Masks fans won't want to miss.

Season five opens with an epic two-part, 22-minute special, Ninja Power Up, unveiling new hero powers and a powered-up HQ. Night Ninja kicks-off the episode by taking over HQ to steal all the heroes' powers from the PJ Crystal. To put a stop to Night Ninja's plan, Catboy, Owlette and Gekko transfer their powers to their PJ Pets to train as heroes. The mission is a success as the PJ Crystal releases power to give the PJ Masks brand new powers, along with a new powerful look for their HQ. The episode shines a light on the importance of teamwork and being a true hero.

Additionally, the show continues to welcome exciting new characters including:

Orticia: A spiky, territorial little girl with witchlike powers over plants! She declares the museum as her home and starts growing freaky plants.

Pirate Robot: A small metallic villainous robot, who wears a pirate hat and an eye patch. He has a "good" eye which can extend like a telescope and his hands can take form as culinary utensils!

Not only wiIl the trio be joined by new friends and baddies, season five also introduces new vehicles, such as the Spanner of the Skies pirate ship and a vehicle-chomping Gigantogarage! Preschoolers can pretend to join Catboy, Owlette, and Gekko on heroic adventures and be part of all the action and excitement of the PJ Masks world with Hasbro's collection of action figures, vehicles, dress-up items, and playsets (each sold separately). HERO ID technology recognizes Hasbro PJ Masks figures as heroes or villains and reacts with unique lights and sounds inspired by the show!
Produced by eOne and Frog Box, in collaboration with the award-winning French animation studio TeamTO, along with Disney Junior and France 5, PJ Masks became a hit with TV viewers nationwide upon its U.S. premiere in September 2015. The first four seasons are available on Disney+ and Seasons 1-3 are available on Netflix.

Based on French author Romuald Racioppo’s imaginative and striking picture book series “Les Pyjamasques,” PJ Masks follows the thrilling night time adventures of three 6-year-old friends, Connor, Amaya and Greg, who transform into their dynamic superhero alter egos, Catboy, Owlette and Gekko, when they put on their pyjamas at night and activate their animal amulets. Together, they embark on action-packed capers, solving mysteries and learning valuable lessons along the way.

How do you feel about this latest PJ Masks news? Share your thoughts with us in the comments below and don’t forget to stay tuned for all the renew/cancel 2021-2022 and beyond news!