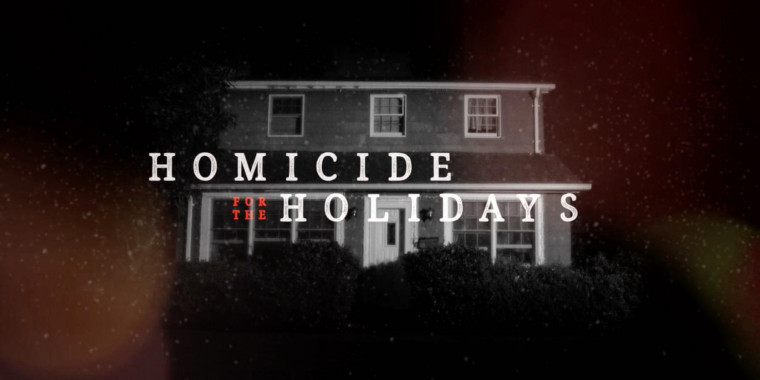 OXYGEN GIFTS TRUE CRIME AFFICIANADOS EXACTLY WHAT THEY WANT THIS YEAR WITH NEW SEASONS OF “HOMICIDE FOR THE HOLIDAYS,” “REAL MURDERS OF ORANGE COUNTY,” “KILLER SIBLINGS,” AND “BURIED IN THE BACKYARD” PREMIERING IN DECEMBER

VIEWERS CAN WHET THEIR APPETITES FOR CRIME AHEAD OF THANKSGIVING WITH BRAND NEW SERIES “EVIL IN ALASKA: FATAL FRONTIER” AND “FAMILY MASSACRE,” PREMIERING IN NOVEMBER

‘Tis the season! Oxygen, the home for high quality true crime programming, invites armchair sleuths to settle in and get cozy with a full slate of new, investigative series just in time for the holidays. The compelling cases include bone-chilling stories set in the wilds of the far northwest, sibling rivalry so contentious it ended in murder , killings that turned sunny SoCal into a much darker place, and winter murders that rendered the sweet holiday season sour.

The luckiest moment in a man’s life gives way to a dark mystery when he vanishes after winning a multi-million-dollar lottery. Did the pressure of sudden wealth cause him to seek privacy, or is there a more sinister reason no one can find him?

Investigating homicide cases is hard. Investigating homicide cases in Alaska is even harder. “Fatal Frontier: Evil in Alaska” explores the darkness that lurks within America’s Last Frontier. Isolation, extreme weather, challenging terrain and other unique factors make for cases that can be incredibly difficult to crack. These are the stories of investigators who succeeded despite the odds.

When an Alaska Native mom is found beaten to death and sexually assaulted in downtown Anchorage, police embark on an uphill investigation that includes groundbreaking forensic work, hours of surveillance footage, and an unlikely suspect.

When a national guardsman is killed in an explosion, investigators try to piece together what happened and discover a complex past, a love triangle, and a neighbor’s growing obsession with his wife.

The Bones on Cobble Hill

A small farm town is rocked when a popular hostel at the town’s favorite tavern disappears into the night. Neighbors in a tight-knit community eye each other suspiciously, unaware that the answers may lie beneath the rolling Nebraska Sandhills.

Murder on the Island

When state troopers in a small island community find the remains of a beloved mother and community member in the woods, they find themselves at a loss wondering who would have killed her, until they discover an unlikely suspect.

A woman is found brutally stabbed to death; her body dumped off an isolated road. When the case hits a dead end, the investigation goes cold for nearly ten years until a rookie detective revives the case with evidence pointing to an unlikely killer.

Buried in the Sand: Underneath the Sunset

When the popular owner of a boutique motel on an island paradise in Florida disappears amid signs of foul play, the deadly secrets of a quaint beach town slowly work their way up through the pristine white sand.

Tragedy strikes rural Iowa as two women are found murdered in their homes. When a local bank is robbed the same day, investigators connect the crimes to an unfolding crime spree and race to find the killer siblings before they can strike again.

“Family Massacre” is a gripping and powerful exploration of some of the most ruthless murders ever committed. This series follows the true and gruesome tales of the unthinkable: multiple members of the same family slain in cold blood. In each episode, we hear from friends and surviving relatives, those people closest to the family that was massacred, while also detailing the work of the dedicated investigators and prosecutors tasked with finding their killer and bringing them to justice. Through first-hand accounts, archival footage and cinematic recreations, we see the twists and turns of the investigation unfold and delve deep into who could have committed such a shocking crime and just how they were caught and made to answer for it.

The family of four is found dead inside a partially burned Indiana home. When investigators discover that two of the victims died by gunshot wounds the race is on to determine whether the killer was a stranger or someone closer to home.

Privilege and money go hand-in-hand. But money creates motive… and motive can lead to murder. Each hour-long episode of “The Real Murders of Orange County” tells the shocking tale of homicide cases that involve famed musicians, billionaire moguls, and entitled narcissists who wanted more than their fair share… or were victims of others who did.

If I Can’t Have You…

The brutal double-murder of two beloved pianists rocks a tranquil Irvine neighborhood. After weeks of twists and turns, the hunt for the killer leads detectives to the strangest of suspects.

A Thanksgiving feast turns into one family’s last when a cold blooded killer brutally stabs and dismembers a couple the day after their holiday celebration.

Dayton, Ohio is terrorized over the Christmas Holiday as a string of brutal shootings have the residents wondering if they could be next.

Killing of the Christmas Tree Farmers

When beloved Christmas Tree farmers are executed in the front seat of their car, a manhunt for their killer is launched that keeps investigators on the case for over three decades before justice is served.

Murder Under the Mistletoe

When a young mother is brutally murdered during the Christmas holiday, investigators uncover a love triangle that shocks her tightknit family and forever robs them of their holiday cheer.

A peaceful town is rocked by the murder of the young wife of a preacher’s son. The investigation leads detectives toward two brothers: one with a deadly ambition, and the other willing to do anything to earn his brother’s love.

After battling a mysterious illness for years, a popular school board official collapses in her Dana Point driveway. But when the coroner reclassifies her death as a homicide, investigators must unravel the cause behind her baffling demise.

Wading in the Water

When a successful lawyer’s body is found buried in a South Floridian canal, detectives use innovative technology to follow the gruesome steps taken by an evil killer.

When the body of a young woman is found in a burnt out station wagon, investigators unravel a deadly plot that leads back to a shattered marriage and two self-made millionaire brothers who feel entitled to do anything to anyone.

A jet setting billionaire finds himself at the center of a murder investigation in Mission Viejo. But what detectives uncover shocks everyone – including the tycoon in the middle of it all.

An entrepreneur forges an unlikely friendship with a ragtag group of skateboarders. But when he vanishes and signs point to foul play, police wonder whether he was really a friend – or a target.

Murders, Mobsters, and the Mustang

When a wealthy Buena Park entrepreneur is violently executed and his girlfriend raped, investigators are faced with a mystery that spans decades. Detectives ultimately uncover a web of murder, mayhem, and mobsters

“Buried in the Backyard” is produced by Renegade 83, an Entertainment One company, with Jay Renfroe, David Garfinkle, Bob Kusbit and Steve Katz serving as executive producers.

About Homicide for the Holidays TV Show

For most, the winter holidays mean bringing family and friends together to eat, drink, and create joyous memories to last a lifetime; but, for others, it’s a time where emotions run high, anger and animosity set in and can spark an explosive combination of simmering resentments and volatile secrets. Sometimes, this emotional powder keg makes for some truly horrific holiday crime stories that viewers are sure to never forget. The series will feature firsthand accounts from families of four cases which include: sibling jealously that turned to bitterness and unhappiness then crystallized in killing; a misfit who saw her parents as the only obstacle to her happiness and murder as the solution; the age-old story, teenage girl meets boy, parents don’t like boy, but with a new horrific ending: murder; and a Psycho Santa who took his piece of the American Dream and tossed it in the flames… literally.

A Thanksgiving feast turns into one family's last when a cold blooded killer brutally stabs and dismembers a couple the day after their holiday celebration.

Dayton, Ohio is terrorized over the Christmas Holiday as a string of brutal shootings have the residents wondering if they could be next.

Killing of the Christmas Tree Farmers

When beloved Christmas Tree farmers are executed in the front seat of their car, a manhunt for their killer is launched that keeps investigators on the case for over three decades before justice is served.

Murder Under the Mistletoe

When a young mother is brutally murdered during the Christmas holiday, investigators uncover a love triangle that shocks her tightknit family and forever robs them of their holiday cheer.

How do you feel about this latest Homicide for the Holidays news? Share your thoughts with us in the comments below and don’t forget to stay tuned for all the renew/cancel 2021-2022 and beyond news!