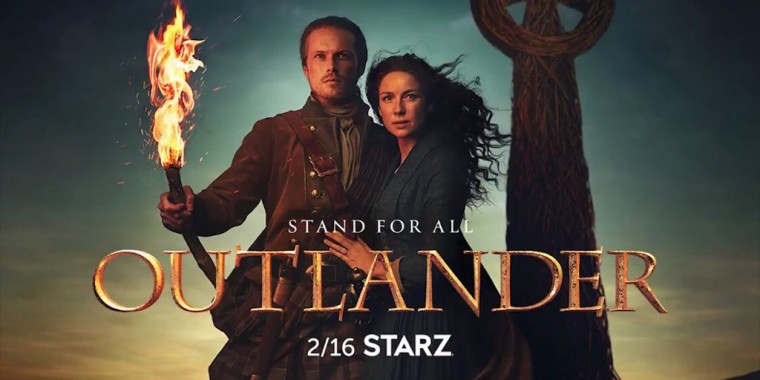 Do we have good news for you! Production on Outlander Season 6 is officially underway.

Santa Monica, Calif. - In honor of World "Outlander" Day, STARZ announced today Droughtlander will end in early 2022 as production wraps this week on the sixth season of the original series "Outlander" from executive producer Ronald D. Moore. Reprising their starring roles, Caitriona Balfe and Sam Heughan as "Claire and Jamie Fraser," Sophie Skelton and Richard Rankin as "Brianna and Roger MacKenzie" and John Bell as "Young Ian," the series returns in 2022 with an eight-episode season including a 90-minute premiere episode.

"We are excited to get into the editing room to work on bringing the fans one step closer to reuniting with the family back on Fraser's Ridge," said Matthew B. Roberts, "Outlander" showrunner. "Filming in 2021 has presented an unprecedented set of challenges which led us to the decision to truncate the season in order to bring the fans the most vibrant and dynamic season as soon as possible. Dinna fash, we will then film an extended season seven with 16 episodes next year as life returns to normalcy."

"We are committed to telling the story fully with gripping and bold storylines in the upcoming eight-episode season that introduces viewers to new characters including Tom, Allan and Malva Christie (Mark Lewis-Jones, Alexander Vlahos and Jessica Reynolds) who create tension on the Ridge," said Christina Davis, President of Original Programming for STARZ. "We can't wait for viewers to see the exciting sixth season that reflects the STARZ #TakeTheLead initiative through unapologetic storytelling and powerful female characters."

The sixth season of "Outlander" sees a continuation of Claire and Jamie's fight to protect those they love, as they navigate the trials and tribulations of life in colonial America. Establishing a home in the New World is by no means an easy task, particularly in the wild backcountry of North Carolina - and perhaps most significantly - during a period of dramatic political upheaval. The Frasers strive to maintain peace and flourish within a society which - as Claire knows all too well - is unwittingly marching towards Revolution. Against this backdrop, which heralds the birth of the new American nation, Claire and Jamie have built a home together at Fraser's Ridge. They must now defend this home - established on land granted to them by the Crown - not only from external forces, but also from the increasing strife and conflict in the community within their care. For the Frasers and their immediate family, "home" is more than simply a site in which they live, it is the place where they are laying the foundations for the rest of their lives. If Season Four asked "What is home?" and Season Five asked, "What are you willing to do to protect your home?" then Season Six explores what happens when there is disharmony and division among the inhabitants of the home you've created: when you become an outsider, or an 'outlander,' so to speak, marginalized and rejected in your own home.

Adapted from Diana Gabaldon's international best-selling books, Season Six is based on material from the sixth book in the Outlander series, A Breath of Snow and Ashes. STARZ recently announced the pick-up of the seventh season of "Outlander" which will be based on the seventh of the eight books in the series, entitled An Echo in the Bone.

The "Outlander" television series is inspired by Diana Gabaldon's Outlander series that has sold an estimated 50 million copies worldwide, with all of the books gracing the New York Times best-seller list. The "Outlander" television series has become a worldwide success with audiences, spanning the genres of history, science fiction, romance and adventure in one amazing tale.

Adapted from Diana Gabaldon’s bestselling books, Outlander follows the story of Claire Randall, a married combat nurse from 1945 who is mysteriously swept back in time to 1743, where she is immediately thrown into an unknown world where her life is threatened. When she is forced to marry Jamie, a chivalrous and romantic young Scottish warrior, a passionate affair is ignited that tears Claire’s heart between two vastly different men in two irreconcilable lives. Outlander spans the genres of romance, science fiction, history, and adventure into one epic tale.

How do you feel about this latest Outlander news? Share your thoughts with us in the comments below and don’t forget to stay tuned for all the renew/cancel 2021-2022 and beyond news!