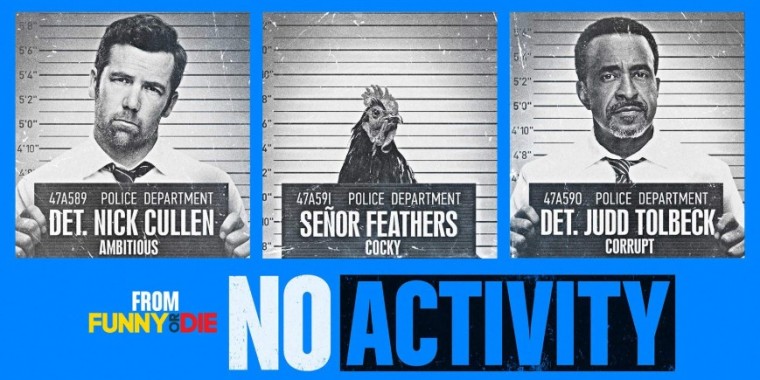 “We are so excited to welcome back the hilarious team behind ‘No Activity’ for a fourth season and can’t wait to show fans their favorite mediocre law enforcement agents brought to life in animated form. Patrick Brammall and Trent O’Donnell never cease to amaze with their unique wit and ability to make the mundane lives of these cops extraordinarily funny, and we’re thrilled that our long-standing partnership with Funny Or Die and Gary Sanchez Productions continues to grow and evolve. We look forward to the crazy antics and misunderstandings Cullen finds himself entangled in – and with whom – in the series’ fourth season.” — Julie McNamara, executive vice president and head of programming for CBS All Access.

“We couldn’t be more excited for the opportunities animation will open up for the ‘No Activity’ universe. We love drawing and have always wanted to express ourselves creatively in that medium. Then the network saw our drawings and said they would be more comfortable hiring actual animation people. Our feelings were hurt but we’re still very excited.” — Patrick Brammall and Trent O’Donnell

About No Activity TV Show

Paramount+, the highly anticipated streaming service from ViacomCBS, today announced that the fourth season of its original, half-hour comedy series NO ACTIVITY will premiere on Thursday, April 8, with subsequent episodes dropping weekly. The season four trailer and key art were also released. As previously announced, the upcoming season will feature the fan favorite NO ACTIVITY characters in animated form.

The series is co-developed, executive produced and written by Patrick Brammall and Trent O'Donnell. Brammall reprises his role as Special Agent Nick Cullen, who is finally realizing his dream of joining the FBI, only to quickly discover being an FBI "special agent" isn't what he expected it to be. When he's assigned to a seemingly dull observation detail, he finds a potential career case in the form of an emerging cult. When a large scale operation takes aim at the cult, it's unclear which side will break first. Despite the promotion, Cullen's path continues to cross with former partner Judd Tolbeck's (Tim Meadows), who is also adjusting to life with a new partner of his own. Joe Keery, Sunita Mani, Jason Mantzoukas, Bob Odenkirk and Amy Sedaris return and will be joined by an exciting group of new guest stars, including Louie Anderson, Kevin Bacon, Jillian Bell, D'Arcy Carden, Rob Delaney, Elle Fanning, Will Forte, Kimberly Hébert Gregory, Udo Kier, Lamorne Morris, Oscar Nuñez, Hannah Simone, June Squibb and Samara Weaving.

NO ACTIVITY is produced by CBS Studios in association with Funny Or Die, Jungle and Gary Sanchez Productions, with animation production services provided by Flight School, and is based on the Stan original series produced by Jungle. In addition to Brammall and O'Donnell, the series is also executive produced by Will Ferrell, Adam McKay, Joe Farrell, Mike Farah, Joe Hardesty and Jason Burrows. Nina Pedrad, Steve Toltz and Becca Kinskey serve as co-executive producers. As in previous seasons, O'Donnell will also direct.

The first three seasons of NO ACTIVITY are available to binge.

Set over the course of a major drug cartel bust, No Activity follows the misadventures of two low-ranking cops who spend way too much time together; two criminals who are kept in the dark; two dispatch workers who haven't really clicked; and two Mexican tunnelers who get stuck in a space unsuitable for a pair of relative strangers.

How do you feel about this latest No Activity news? Share your thoughts with us in the comments below and don’t forget to stay tuned for all the renew/cancel 2021-2022 and beyond news!