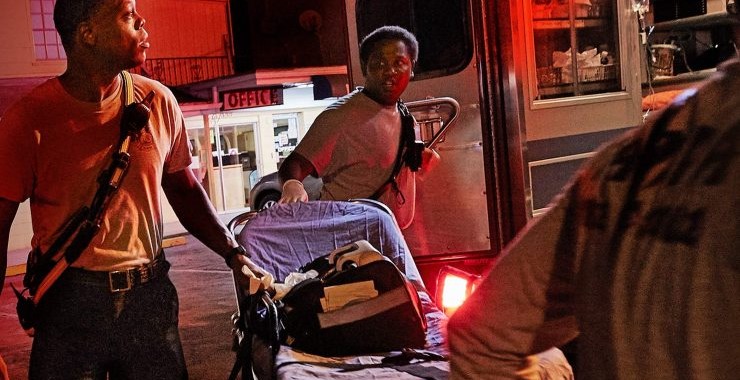 New York, NY - February 17, 2021 - A&E Network's hit non-fiction series "Nightwatch" returns for a new season following the skilled first responders on the front lines of one of America's most dynamic agencies - New Orleans EMS. From Executive Producer Dick Wolf's Wolf Entertainment and 44 Blue Productions, the season will premiere Thursday, March 25 at 10pm ET/PT on A&E. Leading up to the premiere on Thursday, March 11 and Thursday, March 18 at 10pm ET/PT, two one-hour specials, hosted by Holly Sherman and Titus Tero, will look back at some of the past seasons' memorable moments as well as introduce the new team members featured on the series this season.

"We are thrilled for the return of 'Nightwatch' and to continue to provide a platform to showcase the raw and emotional stories of first responders and those they keep safe," said Elaine Frontain Bryant, EVP and Head of Programming for A&E. "The series showcases A&E's intense and impactful storytelling while also celebrating the diverse and inspiring city of New Orleans and those on the front lines who protect it."

"We are excited to rekindle this collaboration and showcase the beauty and resilience of New Orleans," said Dr. Emily Nichols, Director of New Orleans EMS. "It's an honor to feature our outstanding healthcare providers who have given so much of themselves prior to and throughout the pandemic."

Each one-hour episode of "Nightwatch" chronicles the sacrifice and heroic work of the first responders in New Orleans, a singular city filled with rich culture and a vibrant community. This season, the robust team of EMTs and EMS paramedics embrace new partners and roles as they respond to everything from medical emergencies to on the street violence to natural disasters. While the rest of the city sleeps, the medics of NOEMS take on the harrowing overnight shift to keep the residents and visitors of New Orleans safe.

"Nightwatch" follows the dangerous and hectic stretch between 9PM and 3AM when emergency responders come across the most unnerving cases. New Orleans is the backdrop for this nonfiction drama series where cameras have unlimited access to the city’s Fire Department and EMS Unit. Those who cover the night shift battle time and circumstance to save lives while they try to keep their own personal lives and relationships in order.

How do you feel about this latest Nightwatch news? Share your thoughts with us in the comments below and don’t forget to stay tuned for all the renew/cancel 2021-2022 and beyond news!