Home | Renewed | Mysteries of the Abandoned Renewed For Season 7 By Science Channel! 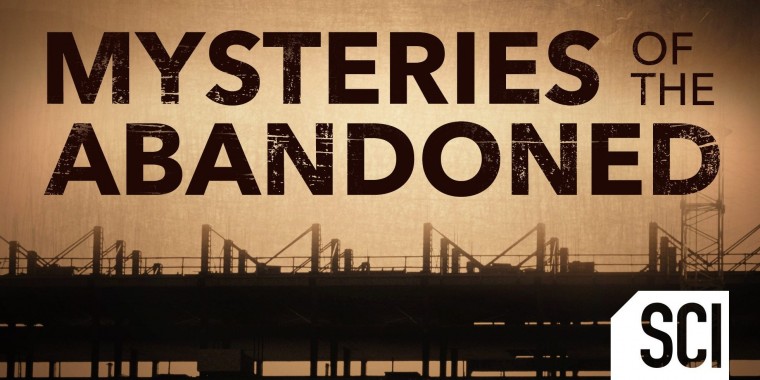 GHOSTS FROM THROUGHOUT HISTORY: AN ALL NEW SEASON OF “MYSTERIES OF THE ABANDONED” PREMIERES DECEMBER 3 ON SCIENCE CHANNEL

An abandoned North Carolina ghost town which briefly served as the backdrop for the dystopian blockbuster film The Hunger Games. A world-renowned yoga center nestled in the foothills of the Himalayas that once recruited the likes of The Beatles and Mia Farrow in search for Nirvana, now untouched and left alone for decades. A vast labyrinth of subterranean tunnels lying beneath the busy streets of Ukraine with ties to KGB spies, Nazis and criminals who once called the catacombs home.

Once important and significant sites and structures across the globe, today these abandoned marvels are mere ghosts of their once rich – sometimes haunting – history. In an all new season of Science Channel’s hit series, MYSTERIES OF THE ABANDONED, experts reveal the stories behind these remarkable places and why they were left behind.

Throughout this season, viewers will travel around the world to uncover the mysteries behind these massive structures and abandoned sites on the brink of collapse. After decades of decay, withstanding erosion, disasters and wars, each of these structures stand to tell their own unique story.

In the northern Dead Sea, a once popular Israeli tourist resort closed suddenly when the safety of guests became of grave concern due to a massive sinkhole engulfing a parking lot, rooms and several palm trees. Once a sought-after destination for travelers around the world, today the buildings stand abandoned as the Dead Sea retreats and more sinkholes emerge at an alarming rate. Sitting high in a sheer cliff face on the Italian island of Sardinia, a strange castle remains eerily abandoned, begging many to wonder what its purpose was at one point in time. Was it built as a defensive structure, or meant to serve as a solution to an impossible engineering problem for nearby mining operations?

Also this season, on a mysterious volcanic island in the East China sea, strange structures sit eerily on a large plateau littered with concrete ‘caves,’ unnatural tunnels and echoes of a dark past. Now a popular destination for visitors eager to understand its shadowed history, this island was once the staging post for untold destruction, anti-communist violence and the killing of thousands of people over time.

Throughout MYSTERIES OF THE ABANDONED, these structures, sites, villages, ruins and more are brought back to life with advanced CGI modeling to help tell the stories of these lost worlds and their haunted pasts.

About Mysteries of the Abandoned TV Show

HIDDEN SITES WITH A HAUNTED PAST: "MYSTERIES OF THE ABANDONED" RETURNS FOR AN ALL NEW SEASON MAY 20 ON SCIENCE CHANNEL AND DISCOVERY+

The mystery of a former palace outside Delhi and a self-proclaimed queen whose fraudulent deception was unraveled by a New York Times reporter. The bizarre riddle of Muhammed Ali's epic "Rumble in the Jungle" and an upscale hotel resort that once hosted the rich and famous throughout its illustrious history with an underground bunker tucked away in case of nuclear attack. A modern theme park in Indonesia struck down by a series of bizarre events.

Once significant sites and structures around the world, today these abandoned places are merely the ghostly remains of what they once were. In an all new season of Science Channel's hit series, MYSTERIES OF THE ABANDONED, experts uncover the stories behind these abandoned marvels and remarkable sites to reveal their once rich, sometimes haunting, history and why they were left behind.

Throughout this season, viewers will travel across the globe to uncover the mysteries behind these massive structures and abandoned sites on the brink of collapse. After decades of decay and withstanding erosion, disasters, and wars, what's left of these structures will reveal secrets from throughout history.

With what is still considered one of the biggest rotative beam engines in the world, this 'Cathedral of Sewage' was once part of a solution to the public health crisis in London following what was known as the 'Great Stink' of 1958. With insight from the descendants of the engineer responsible for designing the facility that transformed London, experts reveal the history of this revolutionary sewer system and what the future of this unique facility holds. Off the coast of China, a giant concrete box looms over the water appearing to look like an apartment block of sorts. But experts reveal this mysterious structure's true purpose - a giant speaker designed to beam propaganda across the straight to the people of Communist China.

Also this season, experts investigate an epic abandoned resort on the banks of the Dead Sea embroiled in controversy and the Russian mafia, a modern abstract tower in the middle of nowhere in Croatia that appears to belong to a futuristic city, and a former priesthood training center in the forest outside of Glasgow with a brutalist exterior.

Throughout MYSTERIES OF THE ABANDONED, these structures are brought back to life with advanced CGI modeling to help tell the stories of these lost worlds and their haunted pasts.

How do you feel about this latest Mysteries of the Abandoned news? Share your thoughts with us in the comments below and don’t forget to stay tuned for all the renew/cancel 2021-2022 and beyond news!