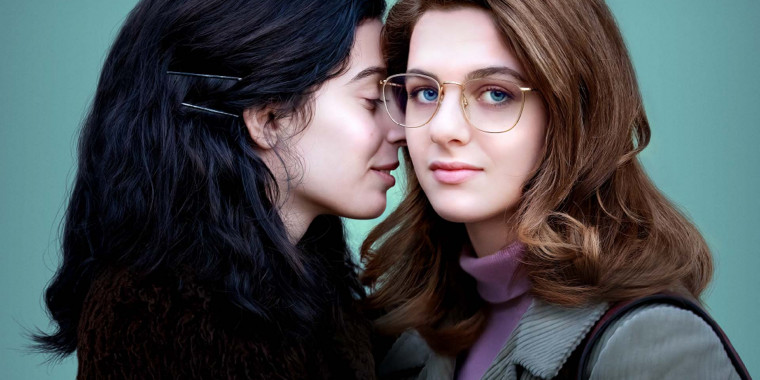 HBO And Rai Renew “MY BRILLIANT FRIEND” For A Third Season

MY BRILLIANT FRIEND: THOSE WHO LEAVE AND THOSE WHO STAY, Created By Saverio Costanzo Is Based On The Third Book In Elena Ferrante’s Quadrilogy

HBO and RAI have renewed the drama series MY BRILLIANT FRIEND for a third season, it was announced today by Francesca Orsi, EVP HBO Programming and Eleonora Andreatta, Rai head of Drama. The eight-episode second season, MY BRILLIANT FRIEND: THE STORY OF A NEW NAME, based on Elena Ferrante’s bestselling book of the same name, which is the second of the four-part series published in the U.S. by Europa Editions, debuted in the US on Monday, March 16. Season three will be based on “Those Who Leave and Those Who Stay,” Ferrante’s third book in the series and is a The Apartment, Wildside and Fandango production with Lorenzo Mieli and Mario Gianani producing for Fremantle’s The Apartment and Wildside and Domenico Procacci producing for Fandango.

“Bringing Elena Ferrante’s exquisite work to life has been such a joy and privilege,” said Orsi. “The fact that viewers and critics alike have continued to embrace Elena and Lila’s story makes it all the more gratifying, and we thank the entire team led by Saverio Costanzo for their outstanding work on the second season. We cannot wait to tell the next chapter of Elena and Lila’s lives and friendship.”

“Meeting with success among the Italian and international audience, the great challenge of MY BRILLIANT FRIEND continues with Rai and HBO announcing the third season, fortifying the ambition to create a complex story and bring the Italian imagination to the world, always keeping the lived experience of our country at the center of the narrative,” said Andreatta. “The success of the second series has confirmed the power of Elena Ferrante’s story and its capacity to become a compelling serial loved worldwide with the richness and charm of Saverio Costanzo’s direction.”

Lorenzo Mieli, CEO, Fremantle’s The Apartment said, “Breaking down geographical and linguistic barriers, betting on the past to speak about the present, and on the specific to turn it into something universal. These were the challenges when we began work on the first season of MY BRILLIANT FRIEND. Encouraged by the perfection of Elena Ferrante’s novels and the talent of Saverio Costanzo, a daring challenge and for that reason, quite marvelous. Our success is also thanks to HBO and Rai, who have accompanied with care the development of a project that has indeed broken down those barriers with grace and beauty.”

Domenico Procacci, CEO of Fandango added, “MY BRILLIANT FRIEND continues its journey. It is a joy and a privilege to work at such a high level of quality, creating and producing a popular show, loved and followed by such a large audience.”

About My Brilliant Friend TV Show

The eight-episode third season, MY BRILLIANT FRIEND: THOSE WHO LEAVE AND THOSE WHO STAY, based on Elena Ferrante's bestselling book of the same name, which is the third of the four-part series published in the U.S. by Europa Editions, debuted in the US on Monday, February 28 on HBO and is available to stream on HBO Max. Season 4 will be based on "The Story Of The Lost Child," Ferrante's fourth book in the series and is a The Apartment, Fremantle Italy, Wildside and Fandango production with Lorenzo Mieli producing for Fremantle Italy, The Apartment and Wildside (both Fremantle companies) and Domenico Procacci producing for Fandango, in collaboration with Rai Fiction and HBO Entertainment.

· Francesca Orsi, Executive Vice President, HBO Programming, quote: "When we decided to bring Elena Ferrante's masterpiece Neapolitan Novels to the screen, we knew Elena and Lila's story had to be told in its entirety. It's both thrilling and bittersweet to embark on this fourth and final season. We're deeply grateful to the entire creative team led by Saverio Costanzo and Lorenzo Mieli, and to our season 3 director Daniele Luchetti. We look forward to completing the quartet and know 'The Story of the Lost Child' will bring the series to a close with the same heart, intimacy, and epic storytelling that has defined Elena and Lila's journey from the beginning."

· Maria Pia Ammirati, director of Rai Fiction, quote: "MY BRILLIANT FRIEND is an asset that has proven the success of our production partnership with HBO Entertainment, Fandango, Fremantle, The Apartment and Wildside. What lies behind this success is the precious opportunity offered by Elena Ferrante's four Neapolitan Novels and the realistic, exciting and originally Italian imagery that has brought to life the audio-visual transposition of the friendship between Lila and Lenù. This mix between a strongly characterized environment, marked first of all by the dialect, then by its humanity and by the emotions heightened through the power of a female friendship, has proved to be a driving force for seriality, as well as a showcase for the creativity and expertise of Italy's audio-visual industry. Our aim is to maximize this in the wake of a now well-established cooperation full of prospects."

· Lorenzo Mieli, CEO for The Apartment quote: "When we began work on the television adaptation of MY BRILLIANT FRIEND, we knew we were approaching something special. The books were already a worldwide phenomenon when we began production, so we had the responsibility of making a series up to par. Now that we're announcing the fourth and final season, we believe this daring challenge has been won and we couldn't be more grateful for the encouragement the perfection of Elena Ferrante's novels and Saverio Costanzo's work over the years have given us. Thanks again to HBO, Rai, Fandango, the writers, the directors and all the cast and crew who have accompanied us so gracefully on this journey."

· Domenico Procacci, CEO of Fandango quote: "We're nearing the end of a long and wonderful adventure. There's inevitably some sadness, but the overriding feeling is one of joy for having been part of this fantastic work."

· Logline: MY BRILLIANT FRIEND is the tale of Elena Greco and the most important friend in her life. She met Raffaella Cerullo, whom she has always called Lila, in the first year of primary school in 1950. Set in a dangerous and fascinating Naples, their story goes on to cover more than 60 years of their lives and explores the mystery of Lila, Elena's brilliant friend and - in a way - both her best friend and her worst enemy.

· Season 3 synopsis: Starring Margherita Mazzucco and Gaia Girace, this season follows Elena and Lila, both now grown women, during the great open sea of the 1970s. Lila took her young son and left her husband and a comfortable life to work as a factory worker in the toughest of conditions, while Elena left the neighborhood to study in Pisa, and is now an author of a successful novel that has paved the way to an affluent and cultivated world. They now navigate a scenario of hopes and uncertainties, still united by their strong and ambivalent bond.

MY BRILLIANT FRIEND is the tale of Elena Greco and the most important friend in her life. She met Raffaella Cerullo, whom she has always called Lila, in the first year of primary school in 1950. Set in a dangerous and fascinating Naples, their story goes on to cover more than 60 years of their lives and explores the mystery of Lila, Elena's brilliant friend and - in a way - both her best friend and her worst enemy.

Filmed in Italian, the season two finale of MY BRILLIANT FRIEND will air MONDAY, MAY 4 (10:00-11:00 p.m. ET/PT) on HBO. Starring Margherita Mazzucco and Gaia Girace, the season follows Elena and Lila's journey into adulthood as they weather romance, heartbreak, success, and betrayal.

Vanity Fair hailed the season as "immersive," "addictive," as well as "serious, novelistic art, and verified prestige television." Rolling Stone deemed it "masterful", "gorgeous and gripping," while IndieWire observed, "it's hard to think of a more striking show on television."

MY BRILLIANT FRIEND is created by Saverio Costanzo. An HBO-RAI Fiction Series, the third season is based on the bestselling novel "My Brilliant Friend - Those Who Leave and Those Who Stay", the third book of the quadrilogy by Elena Ferrante published in the U.S. by Europa Editions; a The Apartment, Wildside and Fandango Production; Produced by Lorenzo Mieli and Mario Gianani for Fremantle's The Apartment and Wildside and by Domenico Procacci for Fandango. In collaboration with Rai Fiction and HBO Entertainment. In co-production with Mowe and Umedia. The story and screenplays are by Elena Ferrante, Francesco Piccolo, Laura Paolucci and Saverio Costanzo. Paolo Sorrentino and Jennifer Schuur are the executive producers. Fremantle is the international distributor in association with RAI Com.

The second season begins where the first season left off, with Lila newly - and unhappily - married to upper crust grocer Stefano Carracci (Giovanni Amura) and Elena (Margherita Mazzucco) unsure of her future, both romantically and academically. Believing she lost her own identity when she took her husband's name, Lila (Gaia Girace) is defiant in her marriage as their world continues to orbit around the Solara family, while model student Elena comes to realize that she is not happy inside or outside her neighborhood. During a holiday in Ischia, the two girls reunite with their old childhood acquaintance Nino Sarratore (Francesco Serpico), now a university student with great expectations. The seemingly random encounter will forever change the nature of their bond, projecting the girls into two completely different worlds. Lila becomes a skillful sales assistant in the elegant shoe shop in central Naples owned by the powerful Solara family, and Elena obstinately continues her studies as she prepares to attend university in Pisa. As their worlds expand and they're forced to deal with more adult and complex problems, Elena and Lila fight to find their place in the rapidly changing Italy of the 60s, while their fraught relationship continues to vacillate between love and contempt.

The first season of MY BRILLIANT FRIEND received rave reviews when it debuted in 2018, with Time calling the series, "everything the adaptation of a great book should be," the Boston Globe hailing it as, "insightful and clear-eyed," and the Wall Street Journal declaring the show, "a stunning achievement."

An HBO, Rai Fiction series, produced by Lorenzo Mieli and Mario Gianani for The Apartment and Wildside, both part of Fremantle, and by Domenico Procacci for Fandango, in collaboration with Rai Fiction, In collaboration with HBO Entertainment, In co-production with Mowe and Umedia. Internationally distributed by Fremantle in collaboration with Rai Com; executive producers, Lorenzo Mieli, Mario Gianani, Domenico Procacci, Paolo Sorrentino, Jennifer Schuur, Elena Recchia, Guido De Laurentiis. Based on Elena Ferrante's bestselling book of the same name, which is the second of her four-part series published in the U.S. by Europa Editions.

Wondering how your other HBO, Rai 1 shows are doing? Check out the HBO, Rai 1 2021 TV scorecard page, where you can find the cancel/renew status of all HBO, Rai 1 TV shows!

How do you feel about this latest My Brilliant Friend news? Share your thoughts with us in the comments below and don’t forget to stay tuned for all the renew/cancel 2021-2022 and beyond news!