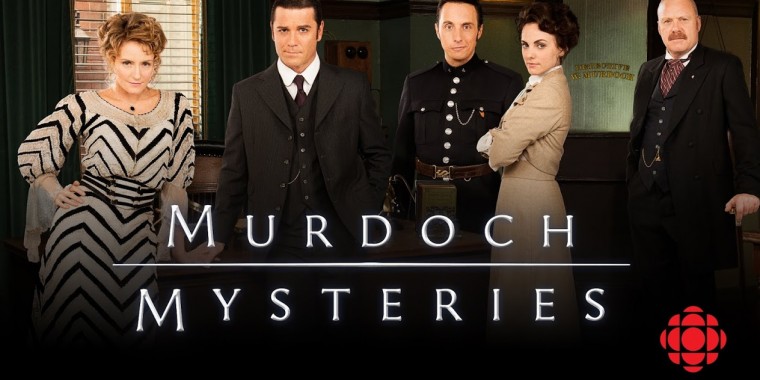 According to insiders, the network hasn’t set Murdoch Mysteries Season 14 as the last in the show’s run, leaving open the possibility of Season 15 and beyond.

As season 14 begins, Detective Murdoch continues his inventive detective work with Ogden's unflinching support even after an investigation leads him to a family member that he never knew about. Brackenreid and Margaret's marriage, now on the mend, is tested once more, and Crabtree's relationship with Effie Newsome is threatened by a potentially volatile interloper. Family relations also loom large for Higgins now that Ruth is pregnant. Unfortunately, Watts' secret love affair faces dangerous scrutiny, while Violet Hart's now public liaison with a wealthy playboy causes social outrage. Season 14 will feature 11 episodes.

Murdoch Mysteries is developed and produced by Shaftesbury, in association with CBC, ITV STUDIOS Global Entertainment and UKTV, and with the participation of the Canada Media Fund, IPF's COGECO Television Production Fund, the Canadian Film or Video Production Tax Credit, and the Ontario Film and Television Tax Credit. Shaftesbury Sales Company and ITV STUDIOS Global Entertainment hold worldwide distribution rights for the series. Murdoch Mysteries is filmed in Toronto and Southern Ontario.

Set in Toronto at the dawn of the 20th century, Murdoch Mysteries is a one-hour drama series that explores the intriguing world of William Murdoch (Yannick Bisson), a methodical and dashing detective who pioneers innovative forensic techniques to solve some of the city's most gruesome murders.

How do you feel about this latest Murdoch Mysteries news? Share your thoughts with us in the comments below and don’t forget to stay tuned for all the renew/cancel 2021-2022 and beyond news!