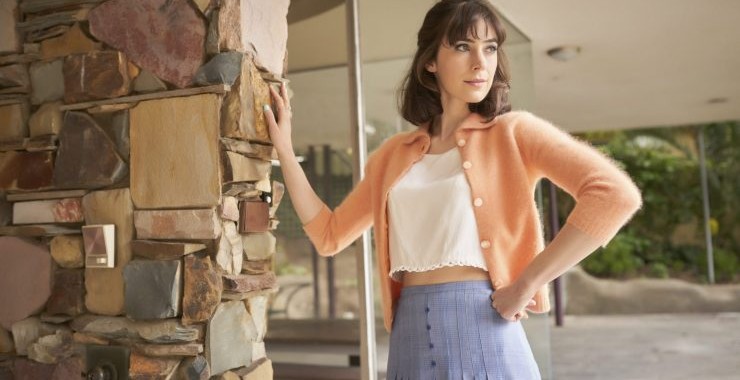 After licensing the first season, AMC Networks’ Acorn TV returns to commission the second season of Ms. Fisher’s Modern Murder Mysteries with Acorn Media Enterprises from Every Cloud Productions in association with all3media international. From the creators of global sensation Miss Fisher’s Murder Mysteries, Fiona Eagger and Deb Cox, this 1960s-set spinoff features the fearless, fun, and charmingly down-to-earth Peregrine Fisher (Logie-nominated Geraldine Hakewill, Wanted) in the lead role as Phryne Fisher’s niece who inherited a windfall from her famous aunt and sets out to become a world-class private detective in her own right. Called a “vivacious crime series (standing) alone and above any comparisons to the original series” by IndieWire and “clever crime fare” by The New York Times, Season 1 exclusively premiered on Acorn TV as four feature-length mysteries in the U.S. and Canada in April 2019. Season 2 will feature eight one-hour mysteries. The Acorn TV Original Series will begin production this October and exclusively premiere on Acorn TV in the United States, Canada, New Zealand, and in its home country on Acorn TV Australia in 2021 and thereafter on the Seven Network in Australia. Leading independent international distributor all3media international will manage distribution in the rest of the world.

Season 1 took place in 1964 Melbourne – after Phryne went missing over the highlands of Papua New Guinea in her light plane – and her long-lost niece, the fearless Peregrine Fisher, took up her famous aunt’s mantle. In Season 2, as crimes continue to unfold around her in the streets of 1960’s Melbourne, our never-say-never sleuth tackles her biggest mysteries yet while juggling romance, a career, and the life of an Adventuress all at the same time. Just as Peregrine prepares to settle into her no-questions-asked courtship with noble policeman James, his desire for marriage brings the crime-fighters to a crossroad on possibly divergent paths.

After their combined, valiant efforts solving cases in department stores, TV studios, and cooking schools in Season 1, Peregrine, James and the rest of the team continue their journeys of self-discovery and romance, tackling some very tough questions about the role of men and women in changing times and facing a fun mix of mysteries involving sexual liberation, flight attendants, family prejudices, dog shows, teen gang wars, bowling alleys, pigeon-racing, and ending the season with a murder at a New Year’s Eve party.

Don Klees, SVP, Programming for the Acorn brands, AMC Networks SVOD noted, “Acorn TV viewers loved the first season of Ms. Fisher’s Modern Murder Mysteries, so we’rethrilled to commission even more mysteries for our subscribers around the world to enjoy. After the success earlier this year of Miss Fisher and the Crypt of Tears, we’re especially excited to be working again with our friends at Every Cloud Productions and all3media on the highly anticipated return of Geraldine Hakewill as the fun and fashionable 1960’s private detective.”

Every Cloud Production’s Deb Cox and Fiona Eagger said: “We are thrilled to be returning to the delightful world of Miss Fisher’s Modern Murder Mysteries with our fabulous cast and our incredible partners, including Acorn TV and all3media who have championed both the original Miss Fisher series and feature film as well as the first series of Miss Fisher’s Modern Murder Mysteries. They have ensured that our legion of fans around the world get to enjoy Miss Fisher in all her incarnations.”

Maartje Horchner, EVP Content at all3media International added; “It’s great to see Acorn TV embracing the continuation of the MISS FISHER brand which is so loved around the world. Every Cloud, rightly, cherishes this show and the partnership guarantees the continuation of a drama of the highest standard.”

Head of Content at Screen Australia Sally Caplan said: “The Miss Fisher franchise has become a global phenomenon and we’re delighted to be supporting creators Fiona Eagger and Deb Cox as they bring a second season of this popular spinoff to audiences in Australia and around the world. The scripts are filled with all the twists and turns you would expect from the Miss Fisher team and I look forward to seeing Peregrine back on our screens sleuthing her way across 1960s Melbourne.”

Film Victoria CEO Caroline Pitcher said: “Miss Fisher is a Victorian success story and we’re proud to support the return of this brilliant series. This much-loved franchise has injected over $45 million into the Victorian economy and an estimated $6 million of direct tourism spend from exhibitions and tours. We know fans will be delighted to see Peregrine Fisher back on their screens and we are thrilled that production will commence shortly, which is incredibly important for our local crew and the recovery of our screen industry.”

The second season will feature returning co-stars Joel Jackson (Peter Allen: Not The Boy Next Door, Deadline Gallipoli) as smart, ambitious cop Detective James Steed; Catherine McClements (Wentworth) as Birdie, an ex-member of WW2 Special Forces and head of The Adventuresses Club, a group of exceptional women of which Peregrine’s celebrated aunt was a member; and Birdie’s gadget-designing brother, Samuel (Toby Truslove).

Production credit: An Every Cloud Production, with major production investment from Acorn TV and Screen Australia, in association with Film Victoria, Fulcrum Media Finance and the Seven Network. Financed with support from all3media International who is also the global partner on the series.

In this spin-off to the wildly popular Australian mystery series, Phryne Fisher's long-lost niece, Peregrine (Geraldine Hakewill, Wanted), decides to follow in her stylish footsteps as a lady detective for a new era.

Get out your go-go boots, as the second season of the acclaimed Acorn TV Original series Ms. Fisher's Modern Murder Mysteries returns internationally on Monday, June 7 on Acorn TV across the US, Canada, Australia and New Zealand. The series will debut with two episodes, with premieres every Monday through July 19.

A spinoff of the Australian sensation Miss Fisher's Murder Mysteries, the swinging 1960's crime series Ms. Fisher's Modern Murder Mysteries follows the fearless and spirited Peregrine Fisher (Logie Award-nominated Geraldine Hakewill, Wanted), the niece of world-class adventuress and private detective Phryne Fisher, as she inherits a windfall from her famous aunt and sets out to become an exceptional sleuth in her own right.

As murders continue to plague the streets of 1964 Melbourne, daring detective Peregrine Fisher tackles her trickiest assignment yet: juggling her career, the busy life of an Adventuress, and her romance with Detective James Steed (Joel Jackson, Peter Allen: Not the Boy Next Door, Deadline Gallipolli.) Playful but never mocking, exuberant but never naive, Peregrine Fisher continues her mission to do the legacy of her famous aunt justice, to find her way in changing times and to make a difference in the world.

This season, while Peregrine investigates cases at an air hostess school, a dog show, and a bowling alley, Birdie Birnside (Catherine McClements, Wentworth) reignites her spying career with an old flame, and Violetta (Louisa Mignone) and Samuel (Toby Truslove) struggle to contain their passion. Despite their busy lives, the gang have Peregrine's back; because the modern road to happy-ever-after isn't always rosy and staying true to oneself can sometimes mean hurting those you love.

How do you feel about this latest Ms. Fisher’s Modern Murder Mysteries news? Share your thoughts with us in the comments below and don’t forget to stay tuned for all the renew/cancel 2021-2022 and beyond news!