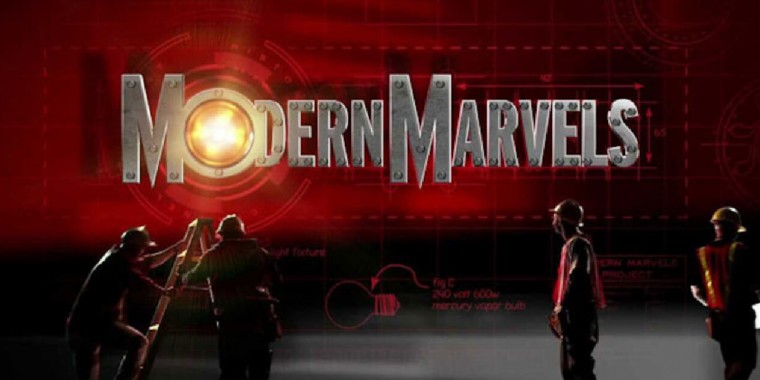 THE HISTORY(R) CHANNEL UNWRAPS THE INCREDIBLE STORIES BEHIND BELOVED FOODS, BRANDS AND THE TITANS THAT SHAPED AMERICA IN BOLD NEW WAYS IN TWO RETURNING NONFICTION SERIES "THE FOOD THAT BUILT AMERICA" AND "MODERN MARVELS"

A Sneak Preview of 'The Food That Built America' Season Two Airs Tuesday, February 9 at 10PM ET/PT Before Moving to Its Regular Timeslot on Sundays at 9PM ET/PT

New York, NY - January 14, 2021 - The HISTORY(R) Channel is feeding viewers appetites with season two of its hit nonfiction series "The Food That Built America," premiering a special sneak preview on Tuesday, February 9 at 10PM ET/PT before moving to its regular timeslot on Sundays at 9PM ET/PT, and returning series "Modern Marvels" now hosted by food author and culinary entrepreneur Adam Richman, airing on Sunday, February 21st at 10PM ET/PT. This season of "The Food That Built America" tells the fascinating history behind the titans who fought their way to the top of the food chain and bites into the rivalries between some of food's biggest and most beloved brands such as Pizza Hut, Oreo, Kraft, McDonalds, Cheetos and more. The fifteen-episode series includes expert commentary from celebrity chefs, food writers, and entrepreneurs such as Adam Richman, Marcus Samuelsson and Rza. In "Modern Marvels" Adam Richman travels the country to behemoth factory lines and locally owned shops going behind-the-scenes of iconic brands and giving an inside look into how our favorite foods such as cookies, cheese and ice cream are made.

"As a longtime fan of The HISTORY(R) Channel, I'm thrilled to partner with the network on not one, but two terrific series. I'm excited to take viewers on a culinary journey through history, pulling back the veil to show how and why certain brands and foods that we know, and love came to be," said Richman. "The insider stories about these legendary entrepreneurs and technical culinary wizards who keep pushing the envelope are a fascinating part of the American story, and I'm delighted to guide the audience through it all."

Coming off the heels of a successful season one, which reached 18.8 million total viewers*, season two of "The Food That Built America" is serving up a new group of bold pioneers behind America's most iconic food empires. For generations of Americans, food titans such as Herman Lay, James Kraft and the McDonald brothers have been household names. However, before they became titans, they were brilliant - sometimes ruthless - visionaries who revolutionized food and changed the culinary landscape of America forever. Through dramatic recreations, fascinating facts, anecdotes, and expert commentary, season two delves into their unbelievable stories of grit, innovation and determination. The series also leans into America's nostalgia with food by highlighting the product inspiration and numerous trials, triumphs and tribulations endured by these entrepreneurs whose unrelenting innovation ultimately helped them come out on top.

"Modern Marvels" follows host Richman around the country as he finds out everything there is to know about the making of some of America's favorite foods from chocolate, to cheese and ice cream. Exploring the behind-the-scenes processes of popular foods, and the inspiration behind each product, the series presents the how, why, and where of numerous products, supplemented by archival footage, engaging expert interviews, and on-site visits. From behemoth factory lines using expertly choreographed machines that create thousands of products a minute, to smaller, locally owned shops that rely on hands-on hard work and entrepreneurial know-how to make their merchandise, American ingenuity comes in all sizes.

The premiere episode "Cookies" explores the origins, creation and all there is to know about one of America's favorite go-to sweet treats.

Additionally, in February, The HISTORY(R) Channel will launch its original podcast "The Food That Built America," produced in partnership with OZY Media, to accompany the series. The complementary podcast illuminates the gripping dramas and technological breakthroughs of the titans who invented, innovated and propagated the industries upon which our country is built. Audiences can subscribe to The HISTORY Channel Original podcast "The Food That Built America" at www.HISTORY.com/podcasts and everywhere podcasts are available.

A+E Networks holds worldwide distribution rights for both "The Food That Built America" and "Modern Marvels."

How do you feel about this latest Modern Marvels news? Share your thoughts with us in the comments below and don’t forget to stay tuned for all the renew/cancel 2021-2022 and beyond news!