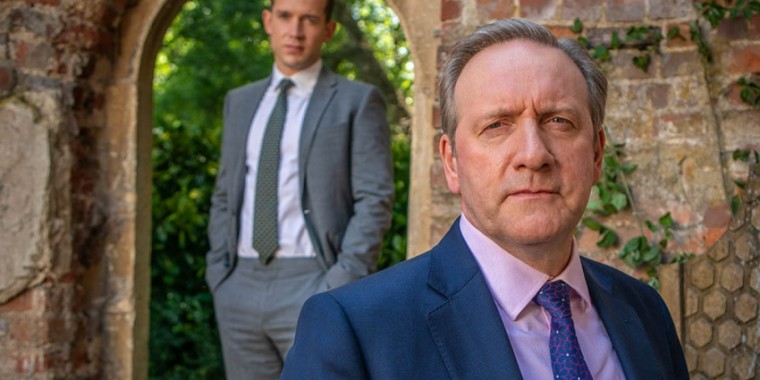 Filming begins on the 22nd series of Midsomer Murders

A spate of bizarre deaths will occur across middle England as filming begins on a new series of the much-loved ITV detective drama Midsomer Murders.

Neil Dudgeon returns to play DCI John Barnaby for his 10th year in the role, Nick Hendrix is back as DS Jamie Winter and Annette Badland resumes her role as pathologist Dr Fleur Perkins. Midsomer Murders is made by Bentley Productions, part of ALL3Media and is the UK’s top-rated drama export.

This series follows Barnaby and Winter as they investigate an urban myth becoming a murderous reality, a post-operative heart rehabilitation club whose members’ dreams of a second chance at life are cut short, a murder mystery weekend, a twisted scarecrow festival and an amateur dramatics company with deadly secrets.

“We are very pleased ITV has asked us to produce more Midsomer Murders. We will have our signature mix of tantalising mysteries, wonderful guest stars and stunning locations while also maintaining a safe working environment for all our cast and crew in these current challenging circumstances.”

“Everyone is excited to get back to work. Sadly there won’t be as much hugging and kissing on set as usual but we’ve all got to make sacrifices! It’s bound to be a bit strange at first with all the safety protocols but hopefully we can all keep each other safe and shoot another great series.”

“We are delighted that filming of the new series of Midsomer Murders has commenced with Neil, Nick, Annette and Fiona back where they belong. It’s a hugely successful series for ITV and we’re all really proud of the fact the audience still enjoys its captivating cases, unexpected plot twists and wonderfully engaging characters.”

With more than two decades of intriguing mysteries and shown in over 200 territories worldwide, Midsomer Murders is one of the most popular and longest-running mystery series of all-time and remains one of Acorn TV's top-performing franchises and a fan favorite. In Midsomer Murders, Detective Chief Barnaby (Neil Dudgeon) and Detective Sergeant Winter (Nick Hendrix) investigate homicides, blackmail, greed, and betrayal in England's most murderous county. The first two movies premiered in April with four more feature-length mysteries to arrive this fall. In the upcoming mid-season debut, the owners of a handmade board game gather for a murder mystery weekend, but the immersive experience takes a puzzling twist when a killer strikes for real.

Ex-rugby player and businessman Mark Adler (Nicholas Goh) seems to have the whole world at his feet; he’s the owner of the successful Causton Lions rugby team and has his beautiful and successful wife Samantha (Tamzin Outhwaite) by his side. However, Mark is mysteriously found dead in a cryotherapy chamber, normally used by the players for their physio. Is it murder or suicide? DCI Barnaby and DS Winter are called in to investigate.

Barnaby and Winter are quick to learn that not everyone was Mark’s biggest fan. Guy Bevan (Julian Lewis Jones) – scorned former coach of the Lions, is in the midst of launching a very public campaign against Mark and his apparent ‘band of thugs’.

Mark’s best friend and head coach Bill Viner (Don Gilet) couldn’t paint a more different picture of the Lion’s hero. Bill had struggled with an alcohol problem for years after an injury prematurely ended his career, but attributes Mark’s belief in him as the main reason for his sobriety. When asked about the circumstances of his injury Bill admits he could have been targeted during the match, having recently come out as gay.

As our detectives get more embroiled in the case, with an increasing list of suspects, including; Guy, Samantha, troubled star player Danny Wickham (Richard Rankin) and Neville (Michael Maloney) the physio, they begin to realise all is not what it seems. But before they can get to the bottom of the case, Barnaby and Winter are thrown by the death of victim number 2; drowned in a chocolate shop kitchen. How can murders at a small confectionary shop and a large sports club be connected?

Barnaby and Winter are desperately try to find the link between the two deaths when they discover that two of the suspects have been harbouring a secret relationship with each other, which leads Barnaby to believe these murders could have been motivated by love, not hate. Following this new theory, Barnaby and Winter hone in on the killer, but can they get to them before it reaches an explosive end?

Midsomer Murders is made by Bentley Productions, part of All3Media. It is produced by Guy Hescott and executive produced by Michele Buck. The Lions of Causton is written by Nick Hicks-Beach and directed by Matt Carter.

How do you feel about this latest Midsomer Murders news? Share your thoughts with us in the comments below and don’t forget to stay tuned for all the renew/cancel 2021-2022 and beyond news!