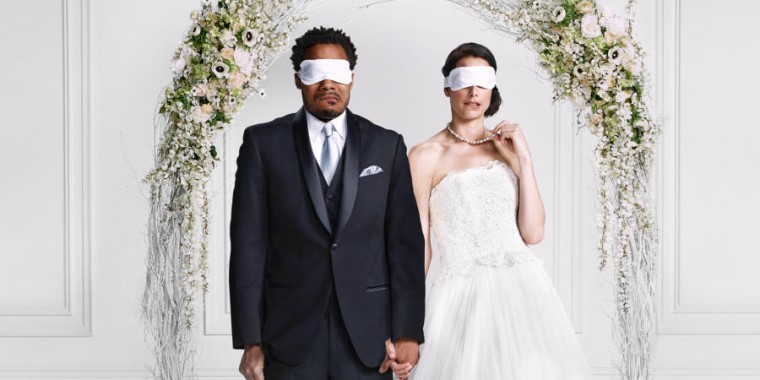 Lifetime is wedded to Married at First Sight.

The cabler has handed the reality show a massive six-season renewal, spanning Seasons 12 to 17.

Los Angeles, CA (November 22, 2021) - With 12 couples still together and 9 children born from the relationships created from Married at First Sight the Critic's Choice Award-winning hit series, returns for season 14, premiering with a three-hour episode, January 5th, 2022 at 8p/7c on Lifetime. The new season will once again take on love in Boston, where season six fan favorites, Shawniece and Jephte, met and married! Season 14 is destined to be romantic, surprising and wickedly entertaining as ten brave singles meet their stranger spouses at the altar and enter into a marriage without ever meeting before.

With experts Pastor Cal, Dr. Pepper and Dr. Viviana Coles at the helm of this dynamic social experiment, the couples will have access to professional guidance, as well as the support of one another along the way - even if the support they are given, comes in the form of some tough love.

Each new two-hour episode will capture each couple's emotional journey as they go from wedding to honeymoon, to early nesting and navigating the daily struggles that come with a new marriage. The newly matched couples will also get the opportunity to meet and share the good, the bad and the ugly about their unique unions. After the eight-week experiment comes to an end, each couple will make the biggest decision of their lives: to stay married or get a divorce. The love, stakes and the suspense couldn't get any higher on this incredible season of Married at First Sight:Boston.

The Season 14 Matchmaking Special will debut December 29th at 8p/7c, providing an in-depth exploration of the matchmaking process as many hopeful singles put their hearts on the line in order to find love. The following night, December 30th at 8p/7c, Lifetime debuts the Kickoff Special where Kevin Frazier hosts a panel of insider experts, for an exclusive first look at the epic upcoming season. The all-access, behind-the-scenes special takes a closer look at each of the five couples about to be married with never-before-seen moments from the selection process and previously unreleased secrets from the Married at First Sight experts.

Alyssa (30) devotes her time to rescuing animals all over the world, leaving little room for dating. Her last relationship ended in heartbreak but she didn't know how unhappy she was until it was over. Alyssa truly believes that Married At First Sight is her opportunity to find love and she thinks the experts will be able to break her streak of bad luck and find her the man she's been searching for.

Chris (35) has had back-to-back long-term relationships since he was in high school. He needs the experts' help finding a match because he's learned that in his relationships thus far, he and his girlfriends are incompatible once the honeymoon phase ends. He he hopes the matchmakers will be able to find him a woman who will keep his interest long-term! Dating apps are just not getting the job done!

Jasmina (29) knew early on that she had a passion for children, so she dove into her career helping local youth as an early childhood education teacher. After witnessing many failed relationships in her family involving infidelity and having gone through the same in her past relationships, Jasmina has done the work and healed from her trauma. She is truly ready to settle down and hand off the reins to the experts.

Michael (28) has tried all the dating apps but with no substantial results. A heart- to-heart conversation with his sister, led to him signing up for Married At First Sight because he wants a wife and a family but hasn't been able to make it happen on his own. Michael trusts the experts and can't wait to see the magic they create for him in finding his perfect match.

Katina (29) has spent the last two years on a self-love journey; she has been focusing on herself and has grown spiritually. She's always dreamed of being a wife and mother, but has struggled to find the right partner. Katina is ready for Married At First Sight because she believes this process works. She is ready to grow old with someone.

Olajuwon (29) is an admitted former," playboy." After enjoying this period in his life he realized he was lonely. He wants a partner with whom he can share life and hopes to have a family of his own. Olajuwon went to college with Jephte Pierre from season six of Married At First Sight. After reconnecting at their homecoming, Jephte only had great things to say about his MAFS experience so Olajuwon was thrilled when the show returned to Boston.

Lindsey (34) has always looked up to her grandparents' relationship - they've been married for more than 70 years. Having learned a lot from past relationships, Lindsey knows both what she wants and what she brings to the table. She firmly believes that the experts will be able to find her not just a man, but a partner in life.

Mark (37) has wanted to be married his entire life and has been on multiple dating apps, but meeting women who aren't ready to be a wife is frustrating for him. Nicknamed "Mark the Shark" he even applied to be Married at First Sight the last time the experts were in Boston and he feels that MAFS is destined to be his ticket to love! He's hopeful he'll finally get the answer to the question he's been asking for awhile now: "Mrs. Shark, where are you?!"

Noi (33) is known in her group of friends as being the one who loves easily and freely and it has admittedly gotten her into some trouble in the past. She is choosing to go on the Married At First Sight journey because she's tired of being let down. She trusts that the experts will have her best interest at heart.

Throughout his life, Steve (38) has had incredible examples of healthy, happy marriages. Recently, he found out his grandparents - who have been married for 60 years - had an arranged marriage. After witnessing so much love and happiness, marrying his future wife at first sight does not scare Steve. He is very hopeful that the experts will be able to find him a match who will make him as happy as his grandparents.

Before the Big Day, MAFS: Matchmaking Special Premieres July 7th and MAFS: Kick-Off Special Premieres July 14th Hosted by Kevin Frazier
Los Angeles, CA (June 10,2021) - Off the heels of the most-watched season ever* of Married at First Sight in franchise history, the Critic's Choice Award-winning hit series just keeps growing as the show heads to Texas for season 13, premiering with a three-hour episode, July 21 at 8pm ET/PT on Lifetime. Season 13 is set to be the most romantic and surprising season yet as ten brave singles meet their new spouse at the altar and enter into a marriage at first sight.

The memorable season will also feature MAFS first Asian-American couple who celebrate their marriage with a traditional Vietnamese tea ceremony and because everything is bigger and better in Texas, the season wouldn't be complete without horseback riding, skeet shooting, home cooking and BBQ! As the experiment goes on some marriages will survive and one husband gets caught in a situation that no one saw coming.

Each week will feature two-hour episodes and capture each couple's emotional journey as they go from wedding to honeymoon, early nesting and eventually dealing with the daily struggles of working on their marriage. After several weeks together, each couple must make a decision: do they remain together for a happily ever after, or decide to divorce and go their separate ways?

The Season 13 Matchmaking Special will debut July 7th at 8pm ET/PT, providing an in-depth exploration of the matchmaking process as many hopeful singles put their hearts on the line in order to find love. The following week on July 14th at 8pm ET/PT, Lifetime debuts the Kickoff Special where Kevin Frazier hosts a panel of insider experts, for an exclusive first look at the epic upcoming season. The all-access, behind-the-scenes special takes a closer look at each of the five couples about to be married with never-before-seen moments from the selection process and previously unreleased secrets from the Married at First Sight experts.

Growing up in South Texas with humble roots, Myrla (34) is a leadership coach, so she's aware of the importance of partnering with experts, and wholeheartedly believes the MAFS experts will find her a perfect match.

Gil (35) was born and raised in Colombia and wants the American dream - wife, kids, pets and a white picket fence. A hopeless romantic, he's ready to find his match to shower her with love and provide a happy, secure life.

Although she was born in NJ, Brett (33) considers Houston to be her hometown and thinks marriage will help to enhance her life. As a long-time fan of the series, Brett is willing to trust the process as a pragmatic hopeful romantic.

Ryan (35) grew up in a small town in Texas where his grandparents and extended family were all within walking distance of his house. Ready for the next chapter of his life, Ryan puts pressure on himself to find a wife because he wants to be a young, active father where he can coach his son's baseball team or fight off his daughter's potential suitors.

Bao (35) was born and raised in Texas to Vietnamese refugee parents. Bao never grew up wanting to be married, but in her 30s, she had a change of heart and is open to finding love. She has a lot to offer and is ready for a life partner who measures up.

Johnny (35) was born in Houston, TX, raised with his sister, by their hardworking single mother. Having seen the effects of divorce at an early age, Johnny has been very particular in finding a partner. He only wants to marry once and has been holding out for the perfect match. After seven years without success on dating apps he is ready to have the experts take the reins.

A Houston native, Michaela (30) is a successful realtor and often sells homes to newlyweds regularly, leading her to want to have a partner to find a home for.

Zack (27) grew up in Baton Rouge, but moved to Houston in hopes of finding a wife. Wanting to be married by the age of twenty-five, the time is ticking on him, finding his happily ever after. Everything he has tried thus far has not worked, but Zack is willing to explore this unconventional way to marriage in order to find his soulmate.

Rachel (33) considers her childhood in Houston a happy one with the only exception being her parents' divorce. In adulthood, she was insecure when it came to dating but this all changed with her last relationship. Though the relationship ended, it restored her hopes of being in a loving marriage with the right man.

Jose (35) grew up in a middle-class family in Pearland. It was a struggle but his parents always made sure he was taken care of. Dating has been frustrating as Jose seems to consistently meet women not seeking anything long-term so he's ready to be married and possibly have kids one day.

Wondering how your other Lifetime shows are doing? Check out the Lifetime 2021 TV scorecard page, where you can find the cancel/renew status of all Lifetime TV shows!

How do you feel about this latest Married at First Sight news? Share your thoughts with us in the comments below and don’t forget to stay tuned for all the renew/cancel 2021-2022 and beyond news!