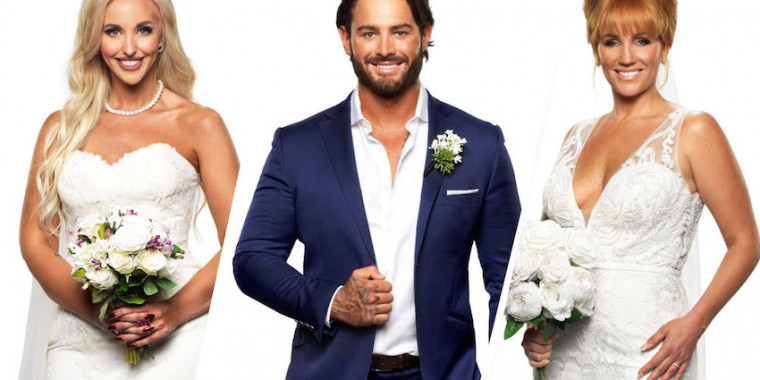 Lifetime is going down under for another season Married at First Sight: Australia. Season 9 of the reality spinoff series hits the U.S. on March 30.

Brazilian-born Carolina is a driven, successful business owner who is passionate and filter free when it comes to relationships. The online business owner from New South Wales falls hard and quickly, and her relationships often end in drama. Growing up without a father, she always felt like she needed to fill a gap. Her teenage son is her everything and she is looking for a man who is as strong and resilient as she is to share her life with.

Dion, a successful property developer from Victoria, enjoys the finer things in life. Although he lives the life of luxury, he is generous, kind, and caring. He is looking for someone to join his big Italian family who he is extremely close with. Dion is looking for the love of his life and he hopes that the bold move to marry a stranger might just work.

Domenica, a makeup artist from New South Wales, is outgoing, feisty, and passionate. Although her decision to end her previous marriage left her devastated, she is hoping to find a husband who will love her for all her quirks. Coming from a big family, she is not afraid of confrontation and will make her voice heard and defend those she loves.

Jack is non-confrontational and often the voice of reason. This charismatic and likeable financial planner from New South Wales gets along with everyone around him with ease. He is hipster at heart looking for a woman who can share his passion for music and adventure. He struggles with the idea of modern dating since he prefers old-fashioned courtship to dating apps.

Ella has been single for nine years and is ready to mingle. The beautician from Victoria is looking for a partner who will be her best friend and biggest fan. Although extremely loyal and faithful, she is a straight talker who is unapologetic about her tendency to overshare. She is seeking a thrilling relationship with a partner who can deal with her moods.

Mitch is a financial planner and part-time model from the Gold Coast. Although most assume he is a party boy, he is an introvert who enjoys his own company. He prefers fishing and camping to clubs and events. Mitch is joining the experiment to learn the tools to find a genuinely committed relationship.

Holly is a cinema manager from New South Wales who desperately wants to meet the love of her life and become a mother. She is upfront about feeling the pressure of having a baby and wants the experts help to manage her stress. She has a lot of love to give and is looking for a man who will return that love back to her and their future children.

Andrew, a larger than life Texan, is a motivational speaker and personal trainer living in New South Wales with a passion for helping others. Twice divorced, he moved to Australia four years ago with his second wife. Despite his failed marriages, he still hopes his soulmate is out there. He wants someone who can match his spontaneity and be a good stepmother to his daughter.

Jessica, a retail assistant from Victoria, is the daughter of devoted parents from a traditional Maltese background. Losing her sister at such a young age has made her grow up quicker and develop of fear of abandonment which extended to dating. She is looking for a husband who will be protective and confident who also has a soft side.

Daniel, a personal trainer from Queensland, is confident, successful, and driven and credits the gym with saving his life. His childhood was unstable and to cope with the stress, he found solace in fitness. He learned to work hard and show up. He wants to be able to show a healthy and stable relationship to his future family.

Kate is a clinical nutritionist from Victoria who has never been in a relationship. Instead of facing the disappointment of dating, her and her twin sister hang out together holed up in their house. The repeated rejections have left her feeling undeserving of love, but she is hoping the experiment will be the beginning of her love story.

Matt, a law clerk from Queensland, is engaging with a great job and friends but is missing love. This is not his first journey down the aisle. After a heartbreaking fertility journey with his ex-wife, they fostered 27 children before eventually splitting after seven years. He is looking for a marriage like his parents, whose relationship he looks up to.

Olivia, a teaching student from New South Wales, is a sweet and bubbly girl who constantly finds herself dating the wrong guys. She attributes her luckless search for love to low self-confidence. She closed the door on dating while taking care of her ill father, spending her weekends at home with him. Despite struggling with her self-esteem, she is bursting with love to give and wants a partner who will love her back.

Jackson, a plumber from Victoria, describes himself as a class clown. Despite his fun-loving ways, he is sensitive and a natural protector. Growing up as the oldest sibling, he did everything to protect his family and keep them safe. Jackson has a deep respect for women and is looking for a committed relationship he can nurture.

Outgoing and ambitious, Samantha is a fashion brand manager from Queensland. She is an independent spirit who is very passionate about her career. However, underneath her resilient exterior, she is still scarred from the breakdown of her previous relationship when her longtime partner cheated on her. She knows it will take someone amazing to capture her heart.

Al is a loveable carpenter from New South Wales who has never had a serious relationship and still lives at home. He knows it is time to grow up and move out. He is the life of the party and doesn't have trouble getting female attention but is finally really to settle down. Coming from a family of five sisters, he is comfortable around women and is hoping his wife will be able to ground him.

Selin is an executive assistant from New South Wales. A single mother to her three-year-old son, this will be her. first date in three years. She is nervous and scared of being hurt and is sacrificing a lot of time away from her son, but she is attempting to ease her guilt by focusing on the opportunity to find true love. Strong-willed and minded, she wants a gentleman who will be on her and her son's team for life.

Anthony, a semi-pro wrestler from Victoria with a sales job on the side, is the quintessential swoon-worthy man. He is looking for a woman who can match his drive and excitement for life. Although he is known in the ring as "Tommy Hellfire," he is a deep thinker with a sensitive side looking for a partner for him and his daughter to share a life with.

Selina, a hairdresser from South Australia, feels like she has never lived up to her parents' expectations. She is driven and self-sufficient but hopes the experts can help her in her quest for love to create a family to fill the home she owns. Selina is half-Cambodian and half-Chinese and says she has struggled to find a connection with the men she has dated in the past. Her funny and bubbly personality is what she is looking to connect with men over.

Cody is an easy-going guy from Sydney's Northern Beaches who loves nothing more than spending time with his friends. He is a swim coach and personal trainer who spends his time traveling and living an adventurous life. He has realized he wants someone who he can share his experiences with. Heartbreak from his childhood caused him to put walls up but he is looking to knock them down for true love.

Tamara is a self-assured, confident, and outspoken operations manager from Queensland. Used to providing for herself, Tamara has high expectations for her partner and wants her future husband to match her on all levels without being intimidated by her. She takes great pride in her appearance and expects her partner to do the same.

Brent, a hospitality manager from New South Wales, is confident, charismatic, and sociable. He lived the high life in Dubai for seven years, running a successful events management company before the pandemic hit. Returning to Australia, he is determined to rebuild his life and that includes meeting his life partner with a dealbreaker being that she must have good feet!

Married at First Sight: Australia is produced by EndemolShine Australia. The format is distributed worldwide by Red Arrow Studios International.

How do you feel about this latest Married at First Sight: Australia news? Share your thoughts with us in the comments below and don’t forget to stay tuned for all the renew/cancel 2021-2022 and beyond news!