Home | Cancellations & Renewals | Killing It Renewed For Season 2 By Peacock! 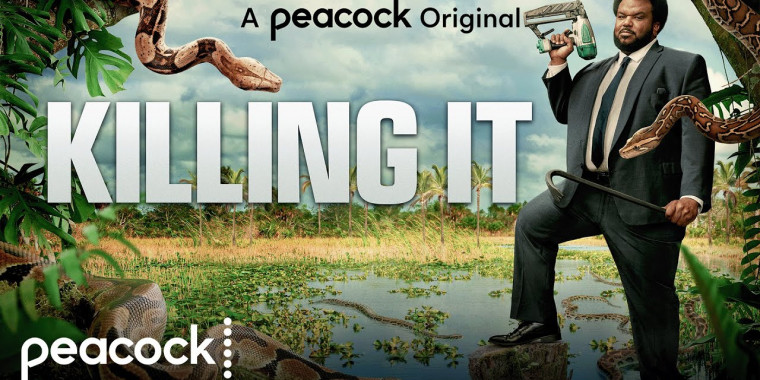 About Killing It TV Show

· "We knew we had a rare gem with Killing It and are thrilled Peacock audiences sank their teeth into this series, led by comedic legend Craig Robinson," said Susan Rovner, Chairman, Entertainment Content, NBCUniversal Television and Streaming. "We can't wait to tell more twists and turns of one person's hilarious, persistent pursuit of the American dream, from the incomparable creative minds of Dan Goor and Luke Del Tredici and our partners at UTV, as Peacock continues to be a home for unique, thought-provoking and humor-filled comedies."

· "We are immensely grateful to everyone at Universal Television and Peacock. 'Snake-based economic satire' isn't exactly a familiar, beloved genre of television comedy, but they were fully behind the project from the start. We can't wait to make more!" said Co-Showrunners / Writers / Executive Producers, Dan Goor and Luke Del Tredici.

· "At its heart, Killing It demonstrates the wild ride we are willing to take when we are passionate about something, while also reminding us to support one another... because there are a lot of snakes out there! This series is a compassionate and hilarious comedy that anyone who has ever been in pursuit of a dream can relate to; that's what makes it so special" said Erin Underhill, President, Universal Television. "We're excited that Peacock has embraced this distinct show, and look forward to continuing our partnership with Dan, Luke, Craig, Claudia and the rest of this fantastic team on a season two."

· The renewal of KILLING IT  joins the additional second season renewals of Peacock Original series WOLF LIKE ME, WE ARE LADY PARTS, GIRLS5EVA, RUTHERFORD FALLS and second season of critically-acclaimed drama series BEL-AIR.

ABOUT KILLING IT SEASON 1:

KILLING IT is a comedy about class, capitalism and one man's quest to achieve the American dream. And also about hunting really big snakes.

How do you feel about this latest Killing It news? Share your thoughts with us in the comments below and don’t forget to stay tuned for all the renew/cancel 2021-2022 and beyond news!