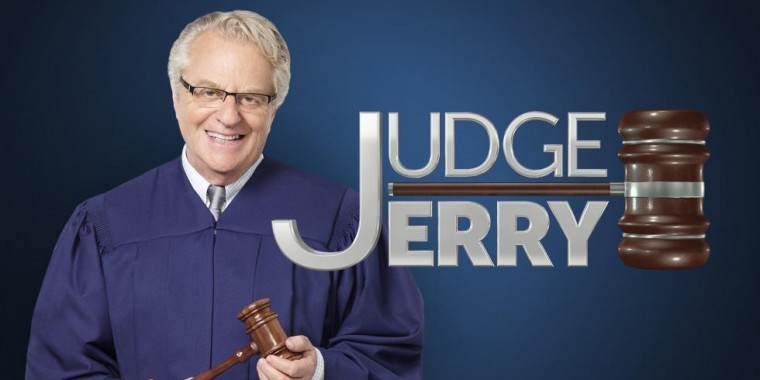 The honorable and iconic "Judge Jerry" Springer is turning up the heat for season three, presiding over a brand-new season of outrageous court cases that promises to be bigger, bolder, crazier and more fun than ever before! Simply put - this is not just another court show... this is Jerry Springer's courtroom.

"I couldn't be more excited for this new season where our audience gets an even closer look into the conflicts and drama of some very intense and outrageous disputes," said Springer. "I'm totally aware of how fortunate I am to have such a rewarding job and I promise viewers and stations to do everything I can to dispense justice and fairness in a most entertaining way."

"With his unique ability to relate to people from all walks of life, our guests trust Judge Jerry Springer to get to the truth and lay all their cards on the table in his courtroom - good and bad!" said Wilson. "We look forward to another season with the show's extremely talented production team, our loyal audience, and continuing 'Judge Jerry's' success for years to come."

"I am thrilled to be working with Jerry on season three," said executive producer, Kerry Shannon. "We're bringing story-driven cases and outrageous characters that our audience will love, to court this season."

"Judge Jerry" utilizes all aspects of Springer's talent for connecting with people. From his incredibly relatable and funny personality, to his law degree and experience as former Mayor of Cincinnati, Jerry Springer has a knack for getting people to confess their dirty laundry with juicy stories along the way. "Judge Jerry" is executive produced by Kerry Shannon.

"Judge Jerry" premiered in national broadcast syndication in the fall of 2019 as the highest rated syndicated court show premiere in 5 years. In its second season, "Judge Jerry's" success continues by averaging over one million daily viewers while delivering one of the youngest audiences among its court show competitors.

Throughout an illustrious career, Jerry Springer has become a cultural and civic icon. Springer's notoriety is due in large part to hosting his eponymous show for over 27 seasons, which is still on the air. Prior to his work in entertainment, Springer began his career as a lawyer having received his law degree from Northwestern University. He joined a law firm in Cincinnati and began practicing law, which he would continue to do for over 15 years. He then served on the Cincinnati City Council for five terms before becoming mayor of Cincinnati at the age of 33. Springer began his career in front of the camera. He was the anchor and managing editor the Cincinnati NBC affiliate, WLWT. It was there that Springer caught the eyes of several executives and was offered his own talk show, "The Jerry Springer Show," which was sold into national syndication.

How do you feel about this latest Judge Jerry news? Share your thoughts with us in the comments below and don’t forget to stay tuned for all the renew/cancel 2021-2022 and beyond news!