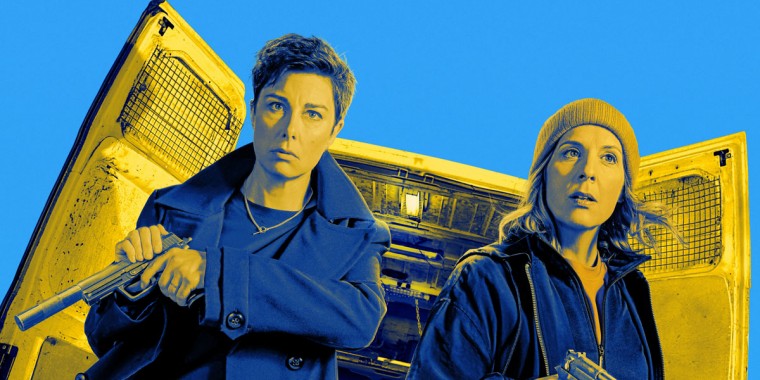 Hitmen will be back for round two.

Sky and Peacock have renewed the crime drama for the UK and U.S., respectively.

Hitmen Season 2 is slated to premiere in 2021 on Sky and Peacock.

· Season two begins streaming Thursday, October 28, with all six episodes available at once on Peacock.

· Best friends Jamie (Mel Giedroyc) and Fran (Sue Perkins) are trying to make their way in the world with only each other to rely on. They also just happen to kill people for a living. Fueled by their hilarious antics and frivolous bickering, each job inevitably gets derailed, leading them into bizarre misadventures, full of oddball characters and unexpected dilemmas.

· After an action packed first series, Jamie and Fran are back with a new van, new assignments, and a mysterious new client Mr V, who seems to be providing them with an abundance of jobs.

· Meanwhile, our heroes reconnect with an old classmate, Kat (Katherine Parkinson, "Defending the Guilty"), at a school reunion. As the series progresses a new friendship between Kat and Jamie makes Fran increasingly jealous and suspicious. It's bad enough worrying that someone is stealing your friend without also having to kill people for a living.

The Sky original series produced by Tiger Aspect follows two best friends trying to make their way in the world with only each other to rely on. They also just happen to kill people for a living.

Hitmen is one of many recent notable commissions as Sky continues to invest in original productions. Sky has recently committed to more than double its investment in original drama, comedy and documentary through Sky Studios, the commissioning and production arm of Sky. Sky Studios brings to screen unique stories from the very best talent in Europe and is the creative home of Sky’s award-winning and much-loved Sky originals.

Sky originals current roster includes Code 404 with Stephen Graham and Daniel Mays; Intelligence fronted by David Schwimmer and Nick Mohammed; Two Weeks to Live starring Maisie Williams and Breeders with Martin Freeman. 2019 has been a record year for Sky originals with 10 time Emmy-winning Chernobyl becoming the most watched original ever with over 4 million viewers of the season finale. And away from the screen, Sky secured a record BAFTA haul with seven awards.

How do you feel about this latest Hitmen news? Share your thoughts with us in the comments below and don’t forget to stay tuned for all the renew/cancel 2021-2022 and beyond news!