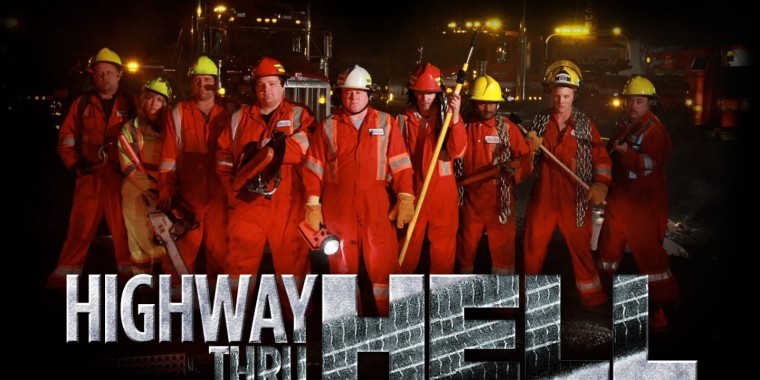 Season 10 of Highway Thru Hell Launches Monday, Sept. 6 at 10 p.m. ET on Discovery

About Highway Thru Hell TV Show

Season 10 of Highway Thru Hell Launches Monday, Sept. 6 at 10 p.m. ET on Discovery

VANCOUVER, British Columbia -- Great Pacific Media, the unscripted division of Thunderbird Entertainment Group Inc. (TSXV: TBRD, OTCQX: THBRF), is pleased to confirm that Bell Media has ordered new seasons of three factual properties - Highway Thru Hell, Heavy Rescue: 401 and Mud Mountain Haulers, for Discovery in Canada. Previously announced at the Bell Media Upfront, each series is consistently among the most watched series on Discovery and its digital platforms, CTV.ca and the CTV app, and represent nearly a decade of ground-breaking, adrenaline-filled Great Pacific Media content to air on the network.

"Great Pacific Media is proud of the enduring legacy of Highway Thru Hell and its spinoffs Heavy Rescue: 401 and Mud Mountain Haulers - and we are thrilled to bring them all back for new seasons on Discovery," said David Way, President of Great Pacific Media. "All three series demonstrate the strength, determination and resilience of men and women facing mother nature, and we are honoured that viewers across Canada - and around the world - continue to embrace these powerful and impactful stories. We are also thankful to the creative, talented teams behind these series at GPM and Discovery, as these renewals would not be possible without dedicated personnel over the seasons, and for the continued support and fantastic partnerships with Bell Media and the CMF."

Highway Thru Hell launched in 2012 to showcase the heroic teams of heavy equipment operators, who put their lives on the line to keep vital freight moving and communities connected across southern British Columbia. The upcoming season, premiering Monday, Sept, 6 at 10 p.m. ET on Discovery, features 18 brand-new episodes, which highlight the grit, ingenuity and heart of heavy recovery like never before. In its most recent season, Highway Thru Hell was a top three Canadian series across all Entertainment Specialty networks in the key A25-54 demographic.

Heavy Rescue: 401 was introduced as a spin-off of Highway Thru Hell in 2016. It follows the efforts of tow truck drivers, emergency workers and police officers who work tirelessly to keep Ontario's famous 400-series highway network open for business. In its recent fifth season, Heavy Rescue: 401 was a top 10 series on Discovery in the A25-54 demographic. The upcoming sixth season will feature 13 brand-new episodes.

Mud Mountain Haulers launched in 2021 as a second spin-off of the Highway Thru Hell franchise. It follows the LeBeau brothers and their third-generation family logging business in British Columbia's Cariboo Region, as they confront some of the steepest, muddiest and most treacherous mountain conditions in North America. In its first season, Mud Mountain Haulers was the number three Canadian program on Discovery for the A25-54 demographic. Season Two returns to the mountain for eight new episodes and new adventures with the LeBeau family. Mud Mountain Haulers has also been sold to international markets by Bell Media. Season One aired in the U.S. on The Weather Channel earlier this year, with the network committing to air the second season, and it will air on lifestyle channel DMAX in Germany.

"We are excited to strengthen our long time, successful partnership with Great Pacific Media, to deliver another round of fan-favourite Discovery originals Highway Thru Hell, Heavy Rescue: 401, and Mud Mountain Haulers," said Justin Stockman Vice President of Content Development and Programming, Bell Media. "Consistently top performers, these tentpole factual series are a constant source of thrills and inspiration for Discovery viewers, and we look forward to their return to the schedule for the 2021/22 broadcast season."

For information on Thunderbird and to subscribe to the Company's investor list for news updates, go to www.thunderbird.tv.

In Highway Thru Hell, each one-hour episode features Jamie’s legendary heavy rescue team and his competitors Mission Towing and Quiring Towing, all working to keep the roads open in perilous working conditions. This season, Scott Bird, the veteran operator who worked for Jamie three winters ago, returns to lead the team in Hope, B.C. Scott may be one of the best in the business, but he has little patience for anything less than perfection. And the last time he worked for Jamie, it didn’t end well. Now Jamie is counting on Scott to “play nice” and help him rebuild.

How do you feel about this latest Highway Thru Hell news? Share your thoughts with us in the comments below and don’t forget to stay tuned for all the renew/cancel 2021-2022 and beyond news!