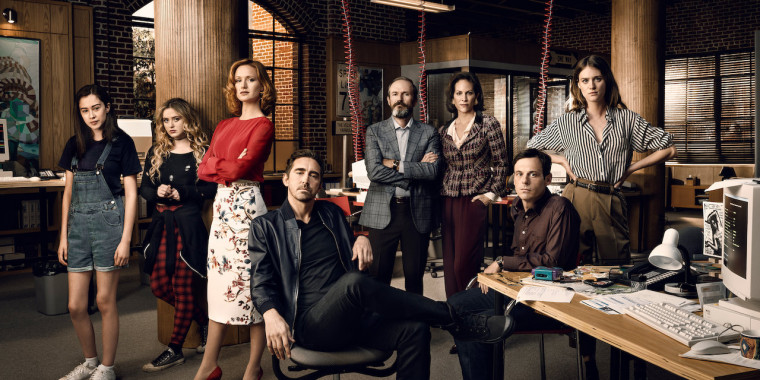 AMC Networks today announced that acclaimed AMC drama “Halt and Catch Fire” is coming to its AMC+ streaming service on December 16. All episodes of the first season of “Halt” will be available starting Thursday, December 16 and then a new season will roll out each Thursday over the following three weeks, until all four seasons are available to viewers commercial-free.

The arrival of “Halt” on AMC+ follows a number of shows that have either been licensed by AMC Networks for the streaming platform or have returned as owned originals after rolling off previous streaming distribution agreements. “Turn: Washington’s Spies” was added to AMC+ earlier this month, following previous additions like “Rectify,” “Hell on Wheels,” “Portlandia” and all seasons of “Mad Men,” the series that marked AMC’s arrival as the home of iconic original series.

“To channel the spirit of Joe MacMillan, streaming services are not the thing, they’re the thing that gets us to the thing, and we are thrilled that ‘Halt and Catch Fire’ is now part of our thing on AMC+,” said Courtney Thomasma, general manager of AMC+. “We look forward to sharing these unforgettable seasons, along with an expanding array of other beloved series that are both inspiring nostalgic rewatches and being discovered for the first time by viewers on our fast-growing streaming service.”

“Halt and Catch Fire” captures the rise of the PC era in the early 1980s, focusing on four primary characters attempting to innovate against the changing backdrop of technology and Texas’ Silicon Prairie. Starring Lee Pace as Joe MacMillan; Scoot McNairy as Gordon Clark; Kerry Bishé as Donna Clark; Mackenzie Davis as Cameron Howe. The series also features Toby Huss as John Bosworth. The series has a 90 percent rating on Rotten Tomatoes and its fourth and final season earned a rare 100 percent Rotten Tomatoes score.

Early next year, both seasons of the BBC America series “Copper” will come to AMC+, kicking off a 2022 that will include final seasons of iconic series “The Walking Dead,” “Killing Eve” and “Better Call Saul,” new originals like the gritty courtroom drama “61st Street,” “Dark Winds,” “Moonhaven,” “Tales of the Walking Dead,” “Anne Rice’s Interview with the Vampire” and “Anne Rice’s Mayfair Witches,” and returning favorites like “Kevin Can F**K Himself,” “Fear the Walking Dead,” “Gangs of London,” and others.

How do you feel about this latest Halt and Catch Fire news? Share your thoughts with us in the comments below and don’t forget to stay tuned for all the renew/cancel 2021-2022 and beyond news!