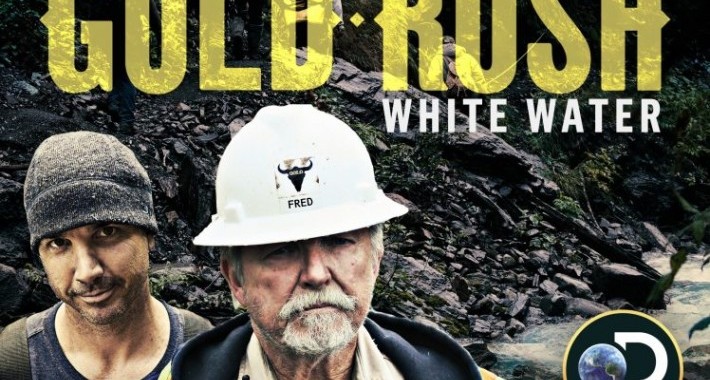 THE YEAR THAT CAN CHANGE EVERYTHING: DIVE INTO A NEW SEASON OF “GOLD RUSH: WHITE WATER”

High in Alaska's remote Chilkat Mountains, the Dakota boys return to the richest ground of their lives, on the hunt for millions in gold. But an unexpected announcement sends shockwaves through the father and son run operation. The departure of one legendary miner makes way for fresh blood, willing to gamble their lives for a life changing payday. And as snowfall threatens to derail their season, miners are pitted vs mother nature in a winner take all battle, in an all-new season of GOLD RUSH: WHITE WATER, premiering Friday, November 5, at 9 PM ET/PT on Discovery and discovery+.

After a record gold haul last year, veteran gold miner Dustin Hurt returns to Alaska to discover his McKinley Creek mine site buried in snow after suffering the heaviest snowfall in over a decade. The unseasonably late snow creates challenges from day one. From impassable roads to raging white-water caused by record snow melt, the miners must tackle every obstacle mother nature throws at them if they have any hope at uncovering a life changing pile of gold.

As Dustin and his team of fearless white-water miners forge ahead, his father Fred Hurt returns to Alaska with shocking news. For the first time in four years, Fred will forgo running a white-water operation of his own and embark on a hunt for his next big mining opportunity. It's a mission to keep the family's mining legacy alive. For Dustin, Fred's sudden change in plans presents an opportunity; buy up Fred's mining equipment and for the first time ever, run two crews simultaneously. It's a huge gamble that will require double the investment and double the manpower, but Dustin knows this is the opportunity of a lifetime. An opportunity to double his chances of uncovering the millions in gold out there for the taking.

Double the crew may double Dustin's chances at a big payday, but it also doubles the danger in one of the most challenging and unforgiving mining operations on the planet. With the addition of 4 new crew members, Dustin is now responsible for 8 lives, challenging his resolve like never before. Will Dustin's big gamble pay off with another record-breaking season, or will it bring financial ruin?

Last season, the Dakota Boys reached their limit and completely mined out their McKinley Creek dive site. This led the pair to head further up and prospect new mining sites on Cahoon Creek, 2,000 feet high up the remote Chilkat Mountains in southeast Alaska.

Now for the first time, father and son are separating and running their own crews as they move higher up the mountain - chasing the mother lode and a massive pay day. But the higher up they go, the more dangerous it gets. As they head deeper into the hostile Alaskan wilderness, they'll risk their lives battling hungry bears, falling rocks and boulders, and raging currents, searching for a monster payday.

With such a remote location, the teams have to "sling in" all their gear and equipment using a helicopter. Once the final drop is made, the Dakota Boys are on their own - forcing them to engineer radical new methods to lift 1,000-pound boulders, lower their dredges down vertical cliffs and fix catastrophic equipment failures in the middle of nowhere. They're putting it all on the line in the pursuit of giant nuggets and a life-changing jackpot of gold.

The pressure is on. But can the Dakota Boys and their team of miners tame the wilderness, strike gold and make it out unscathed?

How do you feel about this latest Gold Rush: White Water news? Share your thoughts with us in the comments below and don’t forget to stay tuned for all the renew/cancel 2021-2022 and beyond news!