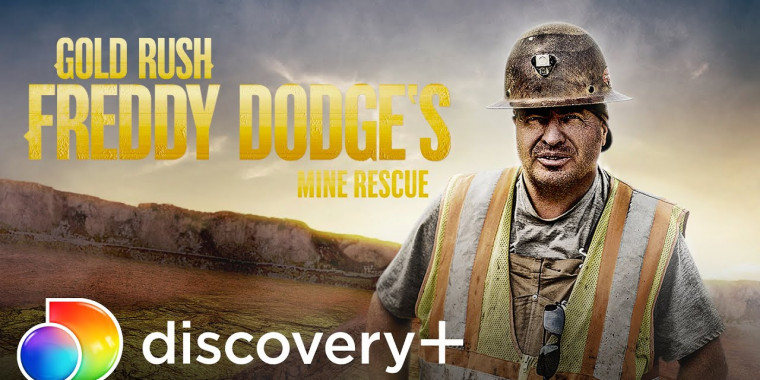 Freddy Dodge is no stranger when it comes to gold mining. With nearly 40 years of mining under his belt, he’s known around the world as the “Gold Guru” and the person struggling mine owners call when they’re striking out. Now he’s going on the road to help struggling mine owners to hit the motherlode in the all-new series GOLD RUSH: FREDDY DODGE’S MINE RESCUE premiering Monday, January 4, on Discovery+.

Freddy is a cheat code when it comes to gold mining. The gold fields of America have become packed with regular people — out-of-work families, groups of friends and lone wolfs – all looking to cash in on rising gold prices. But after sinking everything into their operation, many are ready to call it quits. In each episode, Freddie will share his hard-earned practical knowledge about where to look for gold as well as the inside tips on mining and sluicing it.

To help him turnaround the operations, Freddy has teamed up with expert mechanic and fellow GOLD RUSH miner Juan Ibarra. At each location, the mining duo will use their knowledge of geology, prospecting, drilling and testing to get back on the paydirt. But it isn’t just running their dirt faster. It’s about making the operations better, and more importantly, running cheaper.

From Montana to Alaska to the Yukon to Colorado, gold guru Freddy Dodge and master fabricator Juan Ibarra step in to help struggling miners learn how to run a successful mine. With over 40 years of experience, Freddy and Juan host the ultimate mining masterclass teaching them inventive solutions, insights and bush hacks that will drastically increase the gold production of each mine. GOLD RUSH: FREDDY DODGE'S MINE RESCUE premieres Friday, April 1 at 9 PM ET/PT on Discovery after an all-new episode of "Hoffman Family Gold" and will be available to stream the same day on discovery+.

Everyday people have caught the "gold fever" and are trying their hand at running a gold mine but without the background, tools or experience to be profitable. After investing everything into their operations, many are on the brink of bankruptcy and need expert help if they are going to keep their dreams alive. In each episode, Freddy and Juan travel around the country sharing their tenured mining knowledge to turn these operations around.

This season, Freddy and Juan travel further and face tougher challenges than ever before in their quest to help miners in need. In Alaska they help a single father fulfill a promise to his young daughter and her late mother to turn their struggling hobby mine into a profitable business. In Colorado they save a father and son team with a major clean up problem and even bigger relationship issues. In British Columbia, they face a resistant off-grid prospector. And in Oregon, "Gold Rush" veteran Jim Thurber recruits Freddy and Juan to help his buddies turn their 130-year-old claim in Oregon into a commercially viable mine.

At each mining location, the duo assess how they can increase the gold production. Whether they need to teach them how to find better paydirt or help them repair rundown equipment, Freddy and Juan are determined to bring each mine into the black. With all the invaluable knowledge, will these miners now hit the gold motherlode?

How do you feel about this latest Gold Rush: Freddy Dodge’s Mine Rescue news? Share your thoughts with us in the comments below and don’t forget to stay tuned for all the renew/cancel 2021-2022 and beyond news!