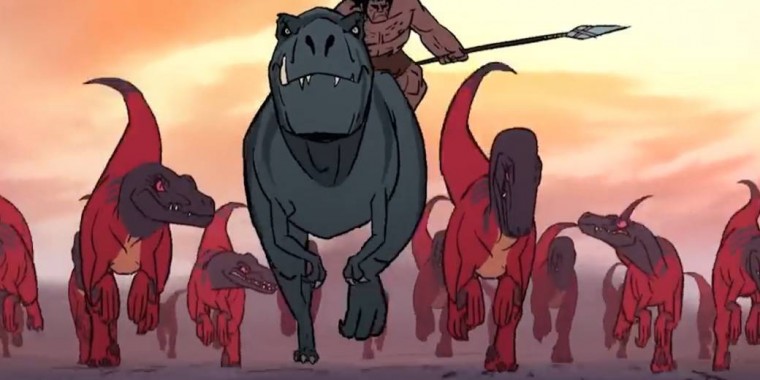 Spear and Fang continue their journey together with five all-new episodes of Genndy Tartakovsky’s Primal, premiering Sunday, October 4th at 11:30pm ET/PT on Adult Swim. Combining artistry, emotion and flat out action, the series has as well been renewed for a second season for an additional 10 episodes. From the mind of Genndy Tartakovsky, the visionary creator behind the Emmy(R) award-winning series Samurai Jack, comes a new tale that follows a caveman at the dawn of evolution as he forms an unlikely friendship with an almost extinct dinosaur.

With suspense, heartbreak, excitement, love and fear all without a single word of dialogue, the series is a painting come to life, relying solely on music and graphic imagery to tell the story of two unlikely allies as they navigate through a treacherous world. After bonding over unfortunate tragedies, they seem to become each other’s only hope of survival against a common enemy.

Catch the first five episodes on AdultSwim.com or on HBOMax now!

Created by Genndy Tartakovsky. With Aaron LaPlante, Tom Kenny, Jon Olson. Primal features a caveman at the dawn of evolution.

How do you feel about this latest Genndy Tartakovsky’s Primal news? Share your thoughts with us in the comments below and don’t forget to stay tuned for all the renew/cancel 2021-2022 and beyond news!