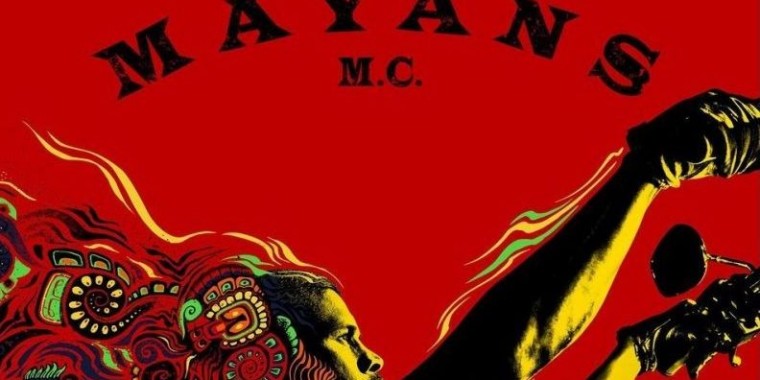 Two Episodes Remain in the Current Third Season, Including Tomorrow Night, Tuesday, May 4 at 10 p.m. ET/PT on FX and Streaming the Next Day on FX on Hulu, and The Finale on May 11th

LOS ANGELES, May 3, 2021 - Mayans M.C. rides on for another season! The biker drama set on the Cali/Mexi border has been renewed for a fourth season on FX, it was announced today by Nick Grad, President, Original Programming, FX Entertainment. The series led by Elgin James, co-creator and executive producer, will return in 2022.

"Elgin James, his creative collaborators, this incredible cast and crew delivered on another epic season of Mayans M.C.," said Grad. "Through three seasons, Mayans has told stories that resonate well beyond the border where the club thrives and survives, inviting fans inside their world and giving them a seat at the table."

"I am deeply indebted to everyone at FX and 20th for allowing us to continue to tell the stories of the characters that Kurt and I created and whom our cast and crew took to new heights in season 3," said James. "In season 4 we look forward to diving deeper into each character's truths, exploring the danger of the combustible world they inhabit, and for each writer, cast member and crew to stake out our place as storytellers."

Mayans M.C. continues tomorrow night with the penultimate episode of the third season on Tuesday, May 4 at 10 p.m. ET/PT on FX and streaming the next day on FX on Hulu: "The House of Death Floats By." The club welcomes a new member. Miguel seeks retribution on his mother's behalf. Written by Sean Tretta; Directed by Elgin James.

Mayans M.C. follows the life of Ezekiel "EZ" Reyes (JD Pardo), a newly patched member of the Mayans M.C. charter on the Cali/Mexi border. Once the golden boy with the American Dream in his grasp, EZ and his brother Angel (Clayton Cardenas) are closer than ever after uncovering the truth behind their mother's murder while their father Felipe (Edward James Olmos) struggles to reconcile the choices he and his sons have made.

After U.S. Assistant District Attorney Lincoln Potter (Ray McKinnon) threatens to deport Felipe, EZ and Angel chose to leverage incriminating information to protect him rather than to free rebel leader Adelita (Carla Baratta) from federal custody, leaving her to give birth to Angel's son while in handcuffs. Meanwhile, Miguel Galindo (Danny Pino) is left reeling over the loss of his mother to apparent suicide, while others quietly suspect foul play. Additionally, the Mayans seek vengeance on their rivals, the Tijuana M.C. Vatos Malditos, after a surprise attack on their club. When the smoke clears, they discover the body of a Sons of Anarchy Motorcycle Club Redwood Original - there will be hell to pay.

Mayans M.C. was co-created by Kurt Sutter and Elgin James. The series is executive produced by James, Michael Dinner and Sutter. The 10-episode third season is produced by 20th Television and FX Productions.

Mayans M.C. has been renewed for a third season, building on the strength of its current second season, it was announced today by Nick Grad, President, Original Programming, FX Entertainment. It was additionally announced that Co-Creator and Executive Producer Elgin James will serve as showrunner for the series' third season, which is scheduled to return to FX in the fall of 2020.

"We're happy to continue telling the story of Mayans M.C. with our partners at Fox 21 and excited that Elgin James has earned the opportunity to become the series' showrunner," said Grad. "Kurt Sutter identified and chose Elgin as his partner on the show from the outset and Elgin has been instrumental to the success of the series, leveraging his experience and creative vision to make Mayans M.C. with this incredible cast, crew and creative team."

"Keeping this vibrant series strong is a huge priority to everyone at Fox 21 Television Studios, FX Productions and of course FX, which has been a spectacular home and platform for both Mayans M.C. and Sons before it," commented Fox 21 TVS President Bert Salke.

After finishing 2018 as cable's most-watched new series for the year in Adults 18-49, Mayans M.C. returned strong for its second season, currently ranking #6 in Adults 18-49 among the 172 cable scripted series in 2019 and in the Top 10 in all other key demos (Live+7). Across all linear and non-linear platforms, Mayans M.C. is averaging 4.6 million Total Viewers per episode.

Created by Kurt Sutter and Elgin James, Mayans M.C. is the next chapter in the award-winning Sons of Anarchy saga. Set in a post-Jax Teller world, Ezekiel "EZ" Reyes (JD Pardo) is a prospect in the Mayans M.C. charter on the Cali/Mexi border. Once the golden boy with the American Dream in his grasp, EZ is trying to reconcile with his brother "Angel" (Clayton Cardenas) while searching for the truth behind their mother's death. Meanwhile, their father "Felipe" (Edward James Olmos) is struggling to lead his sons down a righteous path. The series also stars Sarah Bolger, Michael Irby, Carla Baratta, Antonio Jaramillo, Raoul Max Trujillo, Richard Cabral, Danny Pino and Emilio Rivera. Mayans M.C. is produced by Fox 21 Television Studios and FX Productions.

Critics have also noted the strength of the series as it builds in intensity through season two:

"Mayans M.C. had expanded the world of Sons of Anarchy and allowed its characters to reach far greater heights. And those were some large shoes to fill. The bar may have been set higher for Mayans M.C. than for the rest of the season's new shows, but the spin-off managed to exceed the expectations of even its most cynical viewers, and that's why we have full faith in its future." - Kaitlin Thomas, TV Guide (June 3, 2019)

How do you feel about this latest Mayans M.C. news? Share your thoughts with us in the comments below and don’t forget to stay tuned for all the renew/cancel 2021-2022 and beyond news!