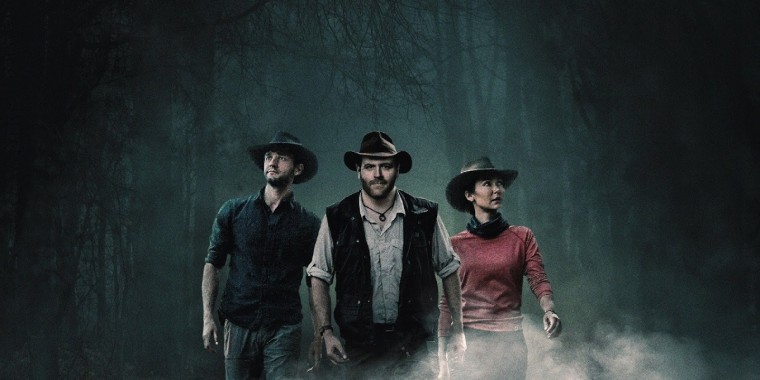 Adventurer and avid explorer Josh Gates has spent his career traversing the globe investigating history’s greatest legends and mysteries. Now, America’s most adventurous talk-show host is getting out from behind the desk and is once again back in the field for a hands-on, heart-pounding investigation as Discovery’s Adventure Wednesday lineup returns with all-new episodes of JOSH GATES TONIGHT and EXPEDITION X. Episodes of both series will be available to watch on Discovery Channel and stream on discovery+.

(Los Angeles) - Adventurer Josh Gates has spent his career traversing the globe and searching for answers to the unexplained. Gates, along with scientist Phil Torres and paranormal researcher Jessica Chobot continue to investigate history's strangest legends and mysteries around the world in an all-new season of EXPEDITION X, premiering Wednesday, September 1 at 8PM ET/PT on Discovery.

In a heart-pounding new season, Josh sends Jessica, a supernatural true believer, and Phil, a curious skeptic, to work with experts and eyewitnesses, deploying everything from thermal drones and Data Acquisition cameras that are capable of spotting UFO's in the sky to infrasound detectors that identify sounds at frequencies below the range of human hearing, all to shed new light on cases that have confounded, fascinated, and frightened people for generations. From venturing into the unforgiving Appalachian wilderness to investigate the truth behind horrifying sightings of feral people, to unearthing clues to a flying beast lurking in the shadows of southern Iowa, Phil and Jessica search far and wide for the truth. In one of their most daring cases yet, Josh sends Phil and Jessica to Thailand in search of the cult behind terrifying warnings of global catastrophes and natural disasters. The risky search for answers intensifies as they gain access to the secretive sect's inner circle and even visit a secret compound deep in the mountains.

The season culminates with an epic two-part special at Fort Morgan in Alabama where Phil and Jessica gain exclusive access to a decommissioned Civil War military fort - rumored to be haunted. After the case takes an unexpected turn, Josh calls on Amy Bruni and Adam Berry from Travel Channel's Kindred Spirits to join the team to further investigate. Phil and Jessica risk it all, using every resource available in their quest for answers to history's most baffling mysteries.

In addition to watching the series on Discovery, viewers can stream past seasons of EXPEDITION X on discovery+. Viewers can join the conversation on social media by using the hashtag #ExpeditionX, as well as follow Expedition Unknown on Facebook and Discovery on Twitter for the latest updates. Host Josh Gates can also be found on Facebook, Twitter, and Instagram.

How do you feel about this latest Expedition X news? Share your thoughts with us in the comments below and don’t forget to stay tuned for all the renew/cancel 2021-2022 and beyond news!