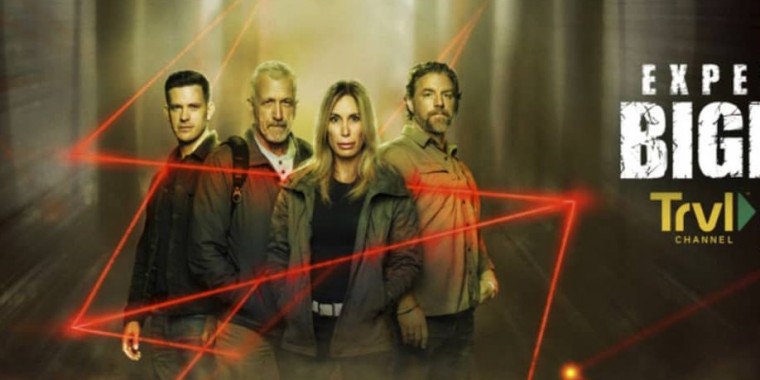 Team Believe an Advanced Algorithm is the Missing Key to Solving the Bigfoot Legend With Kickoff Special on Sunday, January 3 at 8 P.M. ET/PT and Second Season Beginning at 9 P.M.

2020 may just be the year the world turned upside down. But for Travel Channel’s “Expedition Bigfoot” team, it was a rare moment in time when three very important sets of data converged – and put them one step closer to capturing evidence of the legendary, elusive creature. The “Expedition Bigfoot” team have reassembled to review their findings from last season and reevaluate the algorithm to respond to the uptick in Bigfoot sightings just this year, in the new one-hour special premiering on Sunday, January 3 at 8 p.m. ET/PT. Then the team hit the ground running for an exciting Season Two, premiering at 9 p.m. ET/PT.

The advanced data algorithm has revealed a 75,000-acre swatch of Appalachian forest in southeast Kentucky, where the mathematical odds of a Bigfoot encounter are greatly increased during a specific 21-day window. With limited time and opportunity, the team – including Bryce Johnson (expedition operations); Dr. Mireya Mayor (primatologist); Russell Acord (ex-military/survivalist); Ronny LeBlanc (Bigfoot researcher) – have honed in on promising new targets. And this year, their analysis has uncovered something new – possible Bigfoot migratory patterns that may reveal precisely where the legendary beasts will be and when they will be there.

Throughout their two-month journey, the team use the latest in advanced technologies to narrow their search within the designated target zones. As the investigation intensifies, evidence that Bigfoot are in the area begins to pile up – vocalizations, unexplained structures, DNA samples and massive 16-inch footprints that no man could have left behind. This scientific expedition may finally take one of the world’s greatest mysteries out of the pages of legend and lore and into reality. The new season is comprised of 12 new one-hour episodes and two one-hour specials.

“Using science, technology and true grit, the team is genuinely invested in solving this iconic mystery and it’s a wild and exciting ride – closing in on the legendary monster that is also the world champion of being socially distant,” said Matthew Butler, general manager, Travel Channel.

The new season kicks off with a special "New Evidence" pre-show at 9 p.m. ET/PT, looking back at their journey and including a surprising conversation with renowned primatologist Dr. Jane Goodall and Dr. Mayor and then launches into the season premiere at 10 p.m. ET/PT. The season spans 16 one-hour episodes including the pre- and post-season specials that recap all the evidence collected.

During the unprecedented on-camera interview, Goodall revealed that she has been told many unexplained stories of human-like primates from native people living in the jungles of South America and does not discount them. "Just about every country had Bigfoot sightings," said Goodall. "And I met people that have said they have seen something like Bigfoot or Sasquatch."

In fact, Dr Goodall believes these could be highly intelligent creatures, which would explain why no remains have been found to date, and embraces the team continuing the search.

"I approach this expedition with a healthy level of skepticism and an open mind examining all our evidence through the lens of science,", said Mayor. "But science cannot explore closed doors and, like Jane, I believe that it's not about proving or disproving, it's about maintaining the curiosity and wonder of exploration that is necessary to make new discoveries. Having a giant in primatology, like Jane, say she believes they could exist and express support for our research only re-emphasizes the importance of this and invigorates our investigation," said Mayor.

Encouraged by a notable discovery from the previous expedition, the team devises a new plan to rouse a Bigfoot from hiding and prove these elusive creatures are not a myth but a reality. In the season premiere, "Strange Returns," the team returns to the Olympic Peninsula with a new plan to draw out Bigfoot by releasing primate pheromones via a specially modified drone. But after LeBlanc and Mayor see something watching them from above, and Accord is blindsided by a nighttime visitor, it becomes clear - the hunters are now the hunted.

ABOUT THE 'EXPEDITION BIGFOOT' CAST

Bryce Johnson: Acclaimed actor/producer as well as creator and host of the popular podcast "Bigfoot Collectors Club," Bryce has been obsessed with Bigfoot ever since he was a young boy. Although acting is his profession, researching the strange and unexplained, along with crypto-zoological creatures, are his passion. Those pursuits converged in 2013, when Bryce starred in the critically lauded movie "Willow Creek," a found-footage horror film about a quest to find evidence of Bigfoot. While researching his role, Bryce met Robert "Bob" Gimlin, the man who, along with Roger Patterson, captured the legendary footage of Bigfoot in 1967. That meeting, and their subsequent friendship, cemented Bryce's commitment to pursuing the truth about the existence of Bigfoot. He can be found on Twitter, Instagram and Facebook.

Dr. Mireya Mayor: World-renowned primatologist, Fulbright Scholar and National Science Foundation Fellow, Mireya Mayor is not your typical scientist. For nearly two decades, she has been a wildlife correspondent reporting on wildlife and habitat loss while advocating for solutions to the alarming trends. Mireya has been hailed as a "female Indiana Jones" in the media and is an inspiration to young women interested in science and exploration. A two-time Emmy Award-nominated field correspondent for the National Geographic Channel, Mireya reports to audiences worldwide on pertinent wildlife and habitat issues. Her explorations have led to several scientific discoveries, most notably her co-discovery of the world's smallest primates, a brand-new species to science. The daughter of Cuban immigrants, Mireya grew up in Miami and earned her bachelor's degree in anthropology and English at the University of Miami and went on to earn her Ph.D. from Stony Brook University. She recently joined Florida International University as director of the Exploration and Science Communication Initiative. Mireya is also the author of "Pink Boots and a Machete: My Journey from NFL Cheerleader to National Geographic Explorer." She can be found on Twitter, Instagram and Facebook, as well as on the Web.

Russell Acord: Author of "Footprints of a Legend" and "Bigfoot and the Tripwire," event coordinator for the International Bigfoot Conference and skilled survivalist, retired Army Sergeant Russell Acord spends his free time traveling the Pacific Northwest looking for evidence of Bigfoot. Raised in the mountains of Montana, Russell takes a solid scientific approach to his Bigfoot research. His interest in the subject began when he saw the famous Patterson/Gimlin film, and he has been actively searching for Bigfoot since the late '70s. He can be found on Twitter, Instagram and Facebook, as well as the Web.

Ronny LeBlanc: Ronny LeBlanc is a globally recognized figure in the world of paranormal, Bigfoot and UFOs. Ronny is an independent researcher, screenwriter and author of the critically acclaimed and best-selling book "Monsterland: Encounters With UFOs, Bigfoot and Orange Orbs," which details the history and connection between the various phenomena, highlighting his experience and a research area called Monsterland in central Massachusetts. Ronny was the first person ever to cast a Bigfoot print in the Bay State from a trackway discovered by a couple in Leominster State Forest in the summer of 2010. He is a regular speaker at the Exeter UFO Festival, New England UFO Conference and ParaFest and has been featured on nationally syndicated radio programs like "Coast to Coast AM with George Noory" and "Fade to Black With Jimmy Church." He was recently highlighted for his research experience in a cover story for The Boston Herald. He is the founder and host of the "Monsterland" podcast. He can be found on Twitter, Instagram and Facebook, as well as the Web.

“Travel Channel has assembled the very best team of experts in Bigfoot lore and science to give us proof of the creature’s existence once and for all. The journey is formidable, and the jeopardy is real. Skeptics and believers alike will both agree the trek this team makes is something they have never seen before.”

How do you feel about this latest Expedition Bigfoot news? Share your thoughts with us in the comments below and don’t forget to stay tuned for all the renew/cancel 2021-2022 and beyond news!