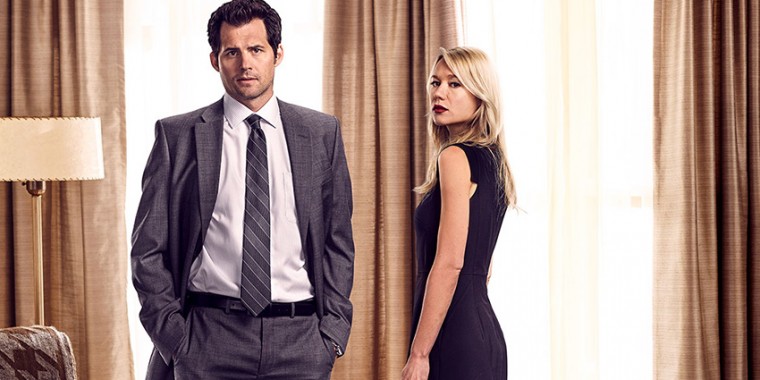 Michael Wright, president of EPIX(R), the premium television network, today unveiled the programming lineup and development slate for 2022 and beyond at the Television Critics Association’s 2022 Winter Press Tour.

The lineup will bring viewers relevant, entertaining, and cinematic television designed for movie lovers. This unveiling comes on the heels of announcing Godfather of Harlem’s return for a third season. In addition to announcing that the network has greenlit three docuseries, Wright also announced that the epic romantic adventure series Billy the Kid, based on the life of the famous American outlaw, will premiere on April 24 and released a new trailer for the series. Billy the Kid follows EPIX’s original contemporary sci-fi/horror series FROM that will premiere on Feb. 20. Adding to this dynamic lineup are bold scripted series including War of the Worlds, Bridge & Tunnel, SAS: Rogue Heroes and Britannia.

The greenlit series announcements today include:

The Making of a Haunting; The Amityville Murders (Docuseries)

This four-part docuseries is based on the world’s most famous scary story: The Amityville Horror. Today it is quite literally the first result if you Google “haunted house.” And yet, what the public knows about this case is merely what the books and films have told them. What they don’t know is that there’s a real murder behind the haunting story and then there’s the supernatural tale of unexplained horrors that haunted visitors to that property for years to come. Executive producers attached include: Lesley Chilcott (Helter Skelter, An Inconvenient Truth), Blaine Duncan, Brooklyn Hudson and Amanda Raymond, Rhett Bachner and Brien Meagher. B17 Entertainment is attached as the production company.

“I am incredibly proud of the premium programming that EPIX continues to produce,” said Wright. “Women Who Rock, The Amityville Murders and and the second season of NFL Icons follow in the footsteps of acclaimed docuseries like Laurel Canyon, Punk and Mr. A and Mr. M: The History of A&M Records, and they exemplify our brand promise to make prestigious and thought-provoking programming with the best storytellers in the industry.”

Based on Stephen King’s short story “Jerusalem’s Lot,” Chaplewaite season two continues as a terrifying re-imagining of classic gothic horror that chronicles one family’s battle with an ancient and persistent evil. We will learn that the Boone curse didn’t die with Jakub, and despite Charles’s selfless act at the end of season one, De Vermis Mysteriis remains as powerful as ever, and as alluring to a new generation of vampires. The series is executive produced by Donald De Line (Ready Player One, Wayward Pines), Jason Filardi and Peter Filardi. Season one starred Adrien Brody as Charles Boone, and Emily Hampshire. Chaplewaite is produced by EPIX Studios.

Domina chronicles the struggle for control of the Roman Empire in the wake of Caesar’s death from a rare female perspective. Livia Drusilla, the golden girl of the prominent Claudii family returned to Rome after ten years in exile, determined to regain everything that was stolen from her. Now, atop a fractious empire, she must fight to preserve her marriage to Caesar Augustus and find a way to seat one of her sons on the throne as rivals new and old jockey for position in a world where it’s impossible to know who to trust. The series is created by Simon Burke, with Burke, Lucy Bedford, Muirinn Lane Kelly and Carmel Morgan as executive producers. Tiger Aspect Productions is producing, in association with EPIX Studios. EPIX has the U.S. rights, and Banijay Rights is the worldwide distributor.

Blue skies and bikinis. Sex and sand. Bullets and blow. This is the story of Roman Compte, Cuban exile, CIA operative and general manager of the Hotel Mutiny, the glamorous epicenter of the late 70’s, early 80’s Miami cocaine scene. The Hotel Mutiny was Casablanca on cocaine, a glitzy nightclub, restaurant, and hotel frequented by Florida businessmen and politicians, international narcos, CIA and FBI agents, models, sports stars, and musicians – particularly the up-and-coming Latin acts who came from South America with their instruments and four kilos of cocaine in their suitcases, and Compte was at the center, doing his best to keep it all going and fulfill his own American Dream. EPIX Studios is developing, with Chris Brancato (Narcos, Godfather of Harlem) attached as writer-executive producer.

Paris, 1952: A popular and provocative Black American author and his equally-talented, but as-yet-unpublished girlfriend arrive with plans to attend the Pan African conference and to get a break from American racism, only to find themselves in the middle of a series of abductions and murders of black men. What at first appear to be casualties of the drug-drenched underground jazz scene end up being a part of something much larger with potentially global consequences in this stylish noir. EPIX Studios is developing, with Carl Franklin and Ben Donald attached as executive producers.

In this half-hour comedy, Broadway star and notorious narcissist Richard Bean (Kevin Kline) suffers a spectacular public meltdown, and returns to his tiny hometown and the family-run theater where he first became aware of his own brilliance. When he arrives, he is shocked to discover that his father, the former artistic director has slipped into a puppet-filled dementia, and that the once respected theater run by his brother (Jon Tenney) and his wife (now the town’s mayor) has become, by necessity, a low-rent dinner theater serving roast beef and murder mysteries. He decides to save the town, the theater and the world by presenting a great American classic on the dinner theater stage, directed by and starring, of course, himself. Michael Hoffman, Bob Martin, Leslie Urdang, Kevin Kline, Anthony Bregman and Miriam Mintz are attached as executive producers. American Classic is being developed as a co-production between EPIX Studios and Anonymous Content’s AC Studios.

Settled into his role as a CIA case officer abroad, Joe Turner has become a foot soldier in the Agency’s Cold War against China for Africa’s substantial natural resources. But when conflict erupts in his own little corner of the continent, Joe has to prevent the proxy war from turning into World War III, even at the cost of what’s left of his soul. Condor Season 2 was executive produced by Jason Smilovic, Todd Katzberg, Andrew McCarthy, David Ellison, Dana Goldberg, Bill Bost, Shane Elrod and Brian Walsh, John Weber and Frank Siracusa. The series is a co-production by lead studio MGM Television and Skydance Television, in association with Paramount Television.

Tails of a London Dog-Walker

A half-hour comedy-drama based on the memoir “London’s Number One Dog Walking Agency” by Kate MacDougall. Amélie meets Bridget Jones by way of New Girl…with dogs. We follow Kate, dog-walker extraordinaire, through her magical world of perfect (and not so perfect) pooches and disastrous dates, all the while discovering who she really is. Ella Greenhill, Emma Frost, Matthew Graham and Anne Thomopoulos will serve as executive producers, with MacDougall as associate producer. Frost and Graham’s U.K.-based independent production company Watford & Essex, a joint venture with Legendary Entertainment, will produce in association with EPIX Studios.

The docuseries music fans have long been waiting for – a definitive portrait of the artist from the artists’ perspective, examining their story in their own words and songs. Combining the most effective and evocative aspects of such shows as MTV Unplugged, Austin City Limits and Behind the Music, SESSIONS will provide a front row seat to an amazing concert. This four-part series will also weave behind the scenes footage, interviews and archival material transporting us back and forth in time, experiencing the artists’ careers then and now, capturing their continued relevance and the indelible mark they have made on global culture. Sutter Road Picture Company, in association with The Kennedy/Marshall Company, is attached as the production company, as are Frank Marshall (Laurel Canyon, Mr. A & Mr. M: The Story of A&M Records), Guss Wenner and Jason Fine (Rolling Stone), and Alison Ellwood (Laurel Canyon) as executive producers. Alison Ellwood is also attached to direct.

Based on the book by historian Donald Bogle, this four-part docuseries will be the definitive chronicle and re-examination of a century of the black experience in Hollywood. From Black Face to Black Power, we’ll tell the epic story of the actors, writers, directors and producers who fought for their place on the screen. This groundbreaking series on Black Hollywood is the definitive account of the black experience on screen – as vital and essential as Ken Burns’ Jazz and Eyes on the Prize. Justin Simien (Dear White People), Forest Whitaker (Godfather of Harlem) and Nina Yang Bongiovi (Godfather of Harlem) are attached as executive producers. Donald Bogle is attached as a consulting producer. Jesse Collins Entertainment is attached as the production company.

From the team behind the three-time Emmy nominated documentary Laurel Canyon, comes San Francisco Sounds, a two-part documentary series that captures the spirit of the San Francisco music scene from 1966 to 1976, where a new progressive sound embracing the psychedelic and protest movements emerging from the Bay Area was born. Framed by four of the most seminal music events in history, Monterey Pop, Altamont, Woodstock and The Last Waltz, the series is anticipated to include artists such as The Grateful Dead, Jefferson Airplane, Sly and the Family Stone, Janis Joplin with Big Brother and the Holding Company, Santana, Moby Grape, Creedence Clearwater Revival, Jimi Hendrix, Otis Redding and Steve Miller. Frank Marshall (Laurel Canyon, Mr. A & Mr. M: The Story of A&M Records), Jeff Pollack, Alex Gibney, Darryl Frank (Laurel Canyon, The Americans) and Justin Falvey (Laurel Canyon, The Americans), and Alison Ellwood (Laurel Canyon) are attached as executive producers. Alison Ellwood is also attached to direct. Jigsaw Productions is producing in association with Amblin Television and The Kennedy/Marshall Company.

Condor Season Three: Settled into his role as a CIA case officer abroad, Joe Turner has become a foot soldier in the Agency's Cold War against China for Africa's substantial natural resources. But when conflict erupts in his own little corner of the continent, Joe has to prevent the proxy war from turning into World War III, even at the cost of what's left of his soul. Condor Season 2 was executive produced by Jason Smilovic, Todd Katzberg, Andrew McCarthy, David Ellison, Dana Goldberg, Bill Bost, Shane Elrod and Brian Walsh, John Weber and Frank Siracusa. The series is a co-production by lead studio MGM Television and Skydance Television, in association with Paramount Television.

Joe Turner has always been conflicted about his work for the CIA. But when something he’s discovered gets his entire office killed, leaving Joe as the only survivor and forcing him to go on the run, the theoretical reservations he’s always harbored turn into all-too-real moral dilemmas. Under life or death pressure, Joe will be forced to redefine who he is and what he’s capable of in order to discover who’s behind this far-reaching conspiracy, and stop them from completing their deadly objective that threatens the lives of millions. Inspired by Paramount’s Sydney Pollack 1975 political thriller Three Days of the Condor. Condor stars Max Irons, William Hurt, Leem Lubany, Mira Sorvino, Brendan Fraser, and Bob Balaban.

How do you feel about this latest Condor news? Share your thoughts with us in the comments below and don’t forget to stay tuned for all the renew/cancel 2021-2022 and beyond news!